A Message of Hope and Solidarity from Onyango Oloo

Liberal Democratic Party councillor Aslam Khan addresses residents who turned up at Jomo Kenyatta Grounds, Kisumu, to press for the implementation of the Bomas draft. 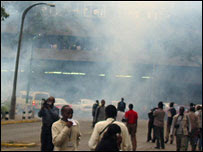 "Why are the police on the streets? Why are innocent people being arrested merely for wishing to stage their right of expression? I want the Minister to tell us what police are doing roaming our streets. When did he declare Kenya a police state? Couldn’t they be better used in other insecurity-prone areas like Marsabit?"

"The NARC government is rolling back the democratic rights of the people of Kenya. By unleashing the police on the streets against its own citizens intending to hold peaceful demonstrations, the Government that bragged of a reformist agenda is trampling on the constitutional rights of the wananchi." 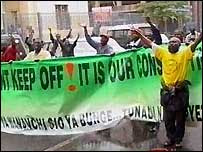 When these cold climes in the northern hemisphere heat up, we boil alive from the humidity. Despite a sudden downpour earlier in the day, it was oppressively hot on the island of Montreal today..

The political temperatures between the two cities are markedly different.

Montreal, a tourist haven, is bursting at the seams with back to back festivals. On the heels of the monster 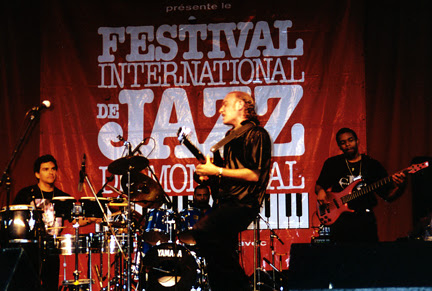 Festival Nuits d'Afrique. Some of us were extremely disappointed that the Mfalme of "rumba rock",

Papa Wemba had to cancel his much anticipated gig at the Kola Note because of a last minute glitch involving a visa; we will console ourselves with the other talented acts from all over Africa, the Caribbean and right here in Quebec; meanwhile we are massaging our funny bones in advance as we prepare to guffaw along to the international motley of comics descending on us for the

By now, most Kenyans know what happened earlier today in Nairobi,Nakuru, Kisumu and other places where a cross-section of patriotic and democratic minded activists poured out onto the streets to express their opposition to the mutiliation of the Zero Draft of the proposed new democratic constitution that was overwhelmingly passed by the delegates of the National Constitutional Conference at the Bomas of Kenya on Friday, March 15, 2004. When I read the coverage in the NAK tilting Daily Nation, I thought I detected a mild approving smirk...

As I embark on this essay (approximately 9:42 in the evening of Tuesday, July 19th here in Quebec) news reports have confirmed at least five arrests including Katiba Watch spokesperson Koitamet Ole Kina, who loudly declared to the world at large, while being bundled into a 504 by secret police kidnappers:

"Why am I under arrest? Take this petition. We're not in a police state. We're not thieves!"

You are a true patriot.

One should never be dragged to the dungeons silently.

They should, like Koitamet, record for posterity each act of police brutality and state terrorism.

We understand that there are scores of injured, especially in Kisumu where there were running street battles between protestors and police- almost exactly a year after the police carnage in that very locale over the very same issue of the Katiba.

My task this evening is not to rehash what will be tomorrow morning yesterday's news-as Kenyans wake up to the second day of mass action to protest the Nyachae-led uncouth surgery on the Bomas Draft.

I want to do something else.

I want to hold my chin, furrow my brow and scratch my head as I ask myself some grave questions such as the following:

What is one to say about a government that has to fortify and barricade itself against its own supporters in the very City where only three years ago the President was escorted from the airport to downtown by at least a quarter of a million delirious supporters who later on went to vote for him almost to a man, woman and eligible voting teenager?

What is one to say about a regime that uses more brutal methods than its predecessor- whose reps now speak more militantly and sincerely of civil liberties in a macabre political switcheroo effect?

What is one to say about the shameless arrogance and greed of ministers who were once known for their humility?

What is one to say about the surreal phenomenon of a former Nyayo House survivor and ex-detainee deputizing for a colonial era police torturer of Mau Mau freedom fighters- with said former human rights lawyer being in charge of organizing the riot goons dispatched to crack the skulls of his former comrades in arms?

What is one to say of a once wanna be President, has been head of the civil service, former stalwart of Bomas presiding over the mutiliation of the people's will while frolicking in the pool with his fellow traitors and sellouts?

What is one to say to the squadrons of riot police brutalizing the very delegates who fought tooth and nail for the security services to have better terms of employment?

What is one to say to online yokels yodelling non-stop ala anonymous jojuogi in a plethora of cyberspace ukumbi celebrating yet another bloody assault against peaceful unarmed fellow Kenyans fighting for the rights of all Kenyans-at home and abroad- to be guaranteed freedom of expression, freedom of association, freedom of assembly, freedom of movement, freedom of conscience and other corner stones of civil, political, social, cultural and economic rights?

Supporters of Kibaki, Nyachae, Awori,Tuju, Kiraitu, Michuki,Kombo, Murungaru and other architects of the butchery of the Zero Draft are sated, delirious with excitement that their godfathers and godmothers in Nairobi kicked some serious political butt in Kenya today. I was saddened to see netters in Nairobi snickering with delight as they logged into raucous public forums hosted in America to chime in about the abysmal turn out of the demonstrations in the city in the sun.

There are dozens of chests that are puffed out in Nairobi tonight; lots of smirks; tons of sneers; gallons full of gales of derisive chortles; "We have won! We have won!, the pampered crows are crowing; "They are crushed! They are crushed!" the bellyfull donkeys are braying; "Slurp! slurp! Let's gorge!" the greedy pin-striped warthogs are oinking.

When I see these macabre beasts doing their grotesque cartwheels and fox-trots at their kooky victory balls, instead of anger, I only sense a sudden sadness- the sadness you feel for a clueless pedestrian soaked for hours in a beer keg who rushes onto the free-way waving goodbye- not seeing the oncoming truck that will crush him a few moments hence.

Can't they see it coming?

I have been asking this question publicly in my essays for the last two years.

Why, I ask myself, do the Kibakis, the Mwirarias, the Kiraitus and the rest think they are an exception to the rules of history?

And speaking of history don't they know the famous remark which goes something like this:

"Those who cannot remember the past are condemned to repeat it."

The most important historical lesson that the NAK parvenu schemers are ignoring has to do with the connection between constitutional impasses and revolutionary upsurges.

Review all past revolutions: the American, the French, the Russian, the Cuban, the Nicaraguan, the Grenada, the Vietnamese... and you will see among the motivating factors which led to the downfall of the ancien regime- wrangles over constitutional dispensations.

Today, on our continent, the South Africans boast one of the best constitutions in the world.

But how did it come about?

Before the huge democratic breakthrough which culminated with the first free and fair elections on April 27, 1994 there had been a decade of mass action and concerted democratic campaigns that had been sparked by a Kilifi like constitutional con trick- the so called "Bicameral Constitution" that gave limited constitutional concessions to the "Indians" and the "Coloured" while locking out completely the indigenous Africans.

So what did this lead to?

I have alluded to all this in a previous essay so I will just reproduce some graphics and a link:

Make sure you check out this historical overview of the UDF by Blade Nzimande and ponder the deeper lessons of sustained mass action by studying how the South Africans eventually set up their Self Defence Units to thwart the repressive machinations of apartheid state terror. 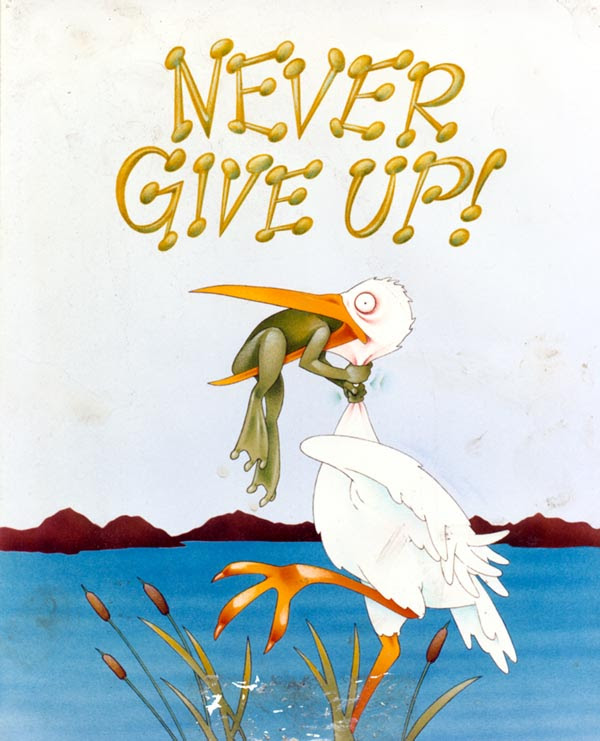 One of these days, just like the valiant fighting people of Ecuador, Bolivia and Venezuela,

We will come out in our throngs in all our major cities and throughout the country side, celebrating our great democratic and constitutional victories.

For now, let the opponents of democratic reform and social justice delude themselves that they have "won".

All they have won is a ticket to the dock of the People's Court where they will be tried for crimes committed against the wananchi. The punishment will be GREATER when it comes to the Kibaki led sellouts and charlatans because of the SHAMELESS WAY in which they sold out their very own electorate- the millions of wapigaji kura who marched to the polling booths in December 2002 chanting Unbwogable and Yote Yawezekana Bila KANU.

In a few hours, the second day of mass action to demand the passage of a new constitution will commence in Nairobi and other parts of Kenya. A few hours ago I called one of my comrades on his mobile and he told me how the riot police had swooped on him and other political friends in a certain corner of Freedom Corner. A veteran of the 1980s university street battles with cops, he told me that the Kibaki era riot squad is more ruthless and more determined than anything Mzee or Nyayo ever put out. He told me that this gang is determined to hang on to power for a very, very long time. Incidentally, he is from the same district as the President and speaks his language-just in case some tribal hecklers were just about to unleash their familiar stream of anti-Luo jibes which has gotten so tired....

From what he is telling me, it seems likely that the Michuki commanded riot cops are likely to be even more brutal than the previous day, July 19th.

So perhaps we should expect newspaper photographs from later today to resemble these photos from last year's Katiba protests:

My questions to Mwai Kibaki and other members of his inner sanctum are these:

How many tear gas canisters will block the people's vision towards a New Kenya?

How many rungus will beat the stubborn hope out of the patriotic wananchi?

How many bullets will shoot down our demand for social justice?

How many water canons will wash out our historical victories and our cherished aspirations for equality?

How many arrests will block your defeat in the coming elections?

Onyango Oloo
Montreal
Posted by Kenya Democracy Project at 7:36 AM

You have answered your own questions. Kenyans are not with you, what you seek is not democracy but dictatorship, luo dominance. You would force your view on others by fighting in the streets. The police must protect innocent wananchi and their property from the hooligans in the street. I have never heard you protest even once, when police are stoned, cars vandalized and wananchi robbed, by so called "innocent protesters". If this is the Kenya you want to bring us, we don’t want it. Kenyans want to work to rebuild their lives and country. We are not interested in endless political wrangles so that Raila can get the posts he wants. There are elections and a ballot box, let Raila stand for president if he wishes, fight for your ideas at the ballot box. That is Democracy not this street thuggery.