"A nightmare is over. Parliament put an end to the lies of the EU Commission and so many others"

You know, I know, we all know that the 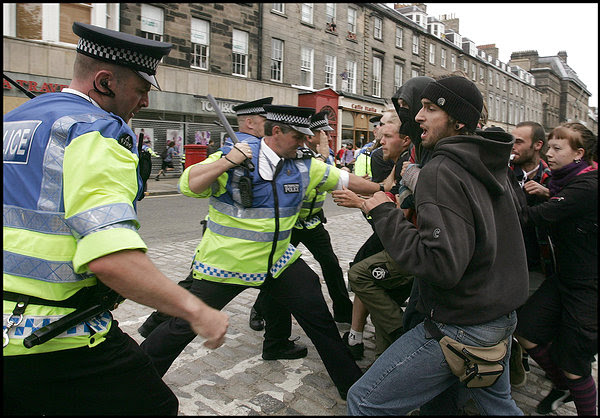 riot police in Scotland have been captured on a thousand digital camcorders committing another crime-brutalizing peaceful demonstrators opposed to the G-8 gabfest which began today at Gleneagles.

I suppose I could have launched another digital essay on that subject-but something tells me that there is no looming shortage of opinions on that subject on this very day.

That is why I turn to an obscure news item which is a huge victory for geeks, especially those geeks who are not in love with Microsoft and other big software and technology companies.

There are at least 277 different online sources for the breaking news that I want to focus on today ranging from ZDNET, to Computer Weekly, to Tech World, to VuNet so why I don't go randomly and arbitrarily to the CHINESE News Agency to share with you their coverage on the decision:

The parliament in Strasbourg, France voted 648 to 14 to throw out the draft law protecting inventions that combine software and machinery, such as codes that reduce battery consumption on mobile phones.

The assembly also ruled out a compromise with governments of the EU member states, which endorsed the legislation in March.

Patents, unlike copyright, give holders exclusive rights to a technology for a set number of years. Patent holders can charge a license fee for their invention and restrict who can use it. Companies are increasingly seeking this protection for computer-driven inventions, which account for about a fifth of patent applications in Europe.

The legislation has sparked heated debates on whether software could and should be patented or whether it should be kept under the protection of existing copyright systems.

Large technology companies backed the proposed law in order to gain more legal protection for their software, even when it is used by others.

Those opposing the bill included smaller software and technology firms, who felt they would be constrained by the stricter regulation.

Many EU lawmakers called the new patent system a legal monster, preferring to keep software patents as they are now.

The European Commission, EU's executive arm, said after the parliament's rejection that it has no intention of submitting a new software patent proposal.

This European Parliament decision is considered a victory for Open Source.

What the heck is that?

Well, let us make sure we are all on the same page when it comes to the basics by clicking on this wikipedia link.


Organizations such as The Free Sofware Foundation are credited with helping to launch the Open Source revolution back in the mid-1980s.

If you visit OpenSource.Org,you will get additional information. Mysql boasts of hosting the largest open source data base in the world; Source Forge is another home you may want to visit, not overlooking Open Source Web Design,or OpenSSL; PostGreSql; NewsForge which calls itself the "online newspaper for Linux and Open Source or DevShed which promises tutorials on Open Source. 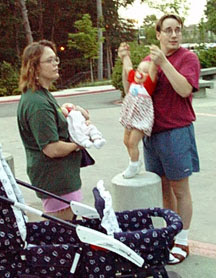 over the past few years, it has gained world wide acceptance as a viable alternative to the operating systems developed by Microsoft and other corporate behemoths.

Red Hat is yet another Open Source upstart that is clearly not going away.

Anyone reading this online is probably familiar with the Mozilla browser developed by the Open Source community, which over the past year has earned itself the mantle of preferred browser for cookie-hating, privacy loving cybersurfers.

Did you know that there were FREE online substitutes to expensive propriety software suites like Microsoft Office?

Well if you did not know, perhaps today would be a good day for you to visit Open Office.Org to find out more....

If you are still unconvinced about the pros of using open source software, it is just remotely possible that this thoroughly researched, organized and lucid scholarly paper will change your dithering mind.

So what is a political activist like Onyango Oloo doing yabbering about Open Source?

Well, because I am not the only one who sees Open Source software as a TOOL for social justice. Check out what was said at the World Social Forum on this topic.

This call has been reiterated in Pambazuka News: Weekly Forum for Social Justice in Africa.

Someone called Bryan Pfaffenberger has argued that open source technology holds the key to the ability of colleges and universities to retain their traditions of scientific and scholarly excellence as they adapt to an increasingly computerized world.

Here is another academic plug for Open Source.

A medical doctor called Daniel L. Johnson wrote a paper in 2001 titled "Medical Enterprises and Open Source" that is worth at least a passing glance.

Here is how biologists can use Open Source.

The following is a presentation on why NGOs and Unions should use Open Source.

Here is a link to an article from Uganda which has direct relevance to Kenyans on the subject of Open Source.

If you want, I could tell you who the KENYAN contact for free software and open source is.

Here are his relevant contacts

Visit their site for more info.

Now do you see WHY I am excited about the European Parliament 648 to 14 vote to throw out the draft law protecting inventions that combine software and machinery, such as codes that reduce battery consumption on mobile phones?