The Elephant in the Kibaki’s Living Room


A Jeremiad from Onyango Oloo in the Montreal Wilderness 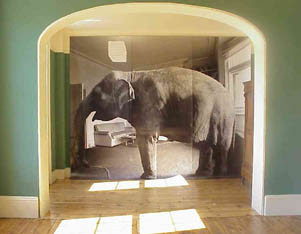 Easter is winding up all over Kenya.

This Sunday, some of Kibaki's staunchest allies-the Christian clergy who have been shielding him from the rest of the wananchi clamouring for the passage of the Bomas Draft-I am talking about venerated robed figures like

Ndingi Mwana a Nzeki and Benjamin Nzimbi-used their pulpit time to demand from Kibaki what millions of Kenyans have been hankering for since December 2002.

These earnest calls take place against the heart stopping back drop of the chilling discovery that a 300 strong secessionist army is gearing up to unleash guerrilla warfare all over the Pwani province.

For some of us, we absorb these news developments with a certain weariness, having warned over six months ago,that the failure of NARC to follow through with some remedial action to implement the recommendations of the Akiwumi Commission will ensure that there are more, not less bloody massacres of innocent Kenyans in the name of ethnicity.

As if that situation was not grave enough, we see the Kibaki regime further antagonizing, instead of engaging potential allies like the pastoral and indigenous communities like the Maasai who have been fighting courageously for their democratic, cultural and land rights and calling for new laws to supplant the old, racist colonial land grabbing edicts that marginalized Kenyans all across the land of their most tangible birth right- land. Of late we have seen
Kibaki's own ministers like

William Ole Ntimama stand up defiantly for their communal interests, while denouncing their fellow NARC MPs who seem to rile the Maasai community with their sabre rattling trumpeting state terrorism.

Meanwhile, all over Kenya, in total mockery of NARC’s pre-election pledges, over one million Kenyan children are still out of school;
horrid conditions at the EPZ slave factories Mombasa are exposing Kenyan workers to lung disease; millions of Kenyans living with HIV/AIDS are reportedly facing a bleak future after the WTO recently cut them off life saving drugs; 2 million Kenyans may be starving by August 2005; even as hundreds, possibly thousands of Kenyan women and girls fall victim to unscrupulous organ harvesters and sex pimps who lure them out of the country to rob them of their kidneys, livers, hearts, dignity and very lives; even as the Kibaki-NAK clique grows increasingly wary of its former friends in the civil society sector even as a cross-section of Kenyan NGOs and social justice formations become increasingly restive and assertive about their democratic rights;

And this is the time, believe it or not, that Mwai Kibaki chooses to make two wacky and hoary internal gaffes:

Shutting out his LDP coalition partners from a NARC strategy session and rebuffing his own DP mandarins and their plan for inner-party revitalization in anticipation of the looming implosion of the fractious governing coalition.

To call NAK Supremo Mwai Kibaki a political nitwit of the highest order is woefully and scientifically imprecise-the polygamous Othaya MP is simply a clueless marionette strung along by the Kiraitu-Karume-Michuki-Murungaru gaggle of desperate, scheming, tribal minded puppeteers, a pathetic rag doll swaying perilously in the tempestuous political maelstroms that currently bedevil Kenya; our head of state is quite possibly off his poor rocker, in other words, completely unhinged, which is to say: stark raving mad -in my humble, but as always, ever candid opinion.
I continue to be mystified as to how the Kibaki regime cannot see how close Kenya is to exploding in open civil war with all the bottled up historical injustices, the simmering land feuds, the frustrations over the long promised constitution, the parlous human rights situation, the sordid picture of mounting grand graft and the chronic infighting within what is supposed to be a governing coalition with a huge popular and democratic mandate.

While Kenya gets ready to burn, arrogant, chest thumping ministers are sauntering around the country threatening to arrest a prominent envoy, bullying a respected civil society leader to do the investigative work that is the preserve of the government’s own policing bodies and our benighted President appeals for divine intervention to solve Kenya's ills.

How pathetic and dangerous!

Clearly neither Kibaki nor his beleaguered regime is up to the task of solving the myriads problems facing Kenya.

They should do the honourable thing:

In the meantime, like I said yesterday, progressive Kenyans can take some lessons from Zimbabwe...

Onyango Oloo
Montreal
Posted by Kenya Democracy Project at 3:28 AM