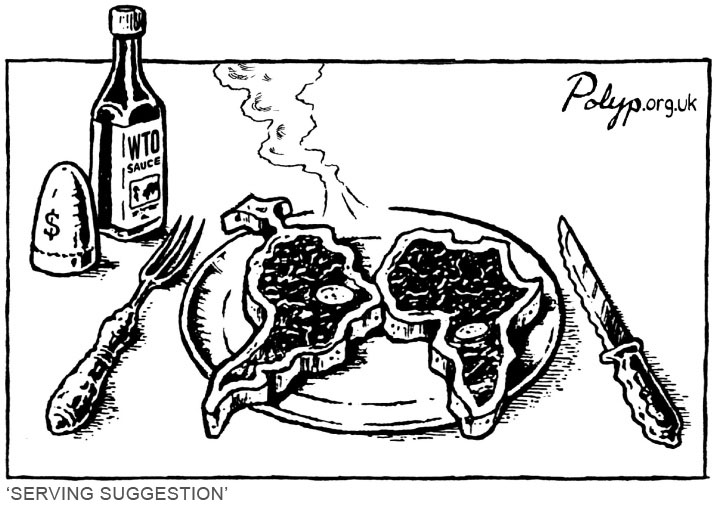 Finally the 10th Ministerial talks on the WTO are finally over.

According to the Nairobi-based  Standard newspaper:

Africa’s big win on agriculture as curtains fall on Nairobi WTO summit
Kenya and other poor countries left the grueling talks of the World Trade Organisation with major wins on agriculture despite stiff opposition from developed nations, including the United States. When the conference ended late last evening, the delegations had agreed to eliminate production and export subsidies, which have been blamed for distorting market prices by keeping them artificially low.
In the process, Foreign Affairs and International Trade Cabinet Secretary Amina Mohamed — who chaired the conference — got a standing ovation over the major decisions that were reached. “It was very intensive...tough calls had to be made, we did bite the bullet and we have a result,” Ms Mohamed said during the closing ceremony.
India and Venezuela were, however, disappointed that the ministerial statement issued did not expressly reaffirm the Doha Development Agenda.
It came as a climax to days of intensive negotiations, which included the last 60 hours until last evening. WTO Director-General Roberto Azedevo told the delegates at the closing ceremony that the outcome of the conference was not the best but good in the prevailing circumstances. Azevedo said.
It would turn out that the developed nations, which were demanding for the termination of the Doha programme, were handed a significant defeat in the marathon negotiations where trade ministers from around the world agreed to carry on with the Doha Development Agenda, a position that Kenya was in favour of.
“We recognise that many members reaffirm the Doha Development Agenda, and the Declarations and Decisions adopted at Doha and at the Ministerial Conferences held since then, and reaffirm their full commitment to conclude the DDA on that basis,” the final ministerial statement reads in part. At least seven major decisions were reached at the stormy conference, including an agreement to remove taxes on electronic goods among 53 major nations and resolution on how much in food stocks different countries should hold in their reserves.
It was a round of talks like no other on the basis that an alternative outcome could significantly weaken the WTO — the global body that seeks to promote trade through developing rules that member countries are required to play by. Representatives from tens of poor countries were clear on their positions since the conference opened on Tuesday that it was only through the Doha programme that their voices could be heard and concerns relating to poverty addressed.

But, the paper's bigger rival from the same city, the Daily Nation, reported it a bit differently:


The closing remarks did not mention the controversial Doha Development Agenda.
Civil society players took a very different reading of proceedings, saying that the talks had made little head way.

Annexures to the final draft text were not released although the text spoke of differences between various players.

“Members have different views on how to address the negotiations. Many members want to carry out the work on the basis of the Doha structure, while some want to explore new architectures,” the communique highlighted as it detailed positions of the two opposing sides, as exposed by the developed countries led by the US and European Union and emerging countries fronted by India, Brazil, Indonesia and Turkey.

Poor countries were seeking to put an end to subsidies given to farmers by developed countries, get developed countries to open up their economies to their people to trade more by ending barriers to entry over and above imposition of duties, and also have capability to protect their upcoming industries from flooding of cheap imports from developed nations usually benefitting from government support. It is these issues that are normally referred to as the Doha Development Round talks.

While lobbies said the poor countries walked out with little, the developed nations managed to introduce new issues and avoid committing to the Doha Round that would have tackled issues of agricultural subsidies by developed countries, market access and export competition.

The new issues including government procurement that would see bids for state tenders open to include global players without giving preference or advantage to local players, a move likely to be a great disincentive to the youth, women and vulnerable groups for countries like Kenya, are now up for discussion after they were dropped in Singapore talks in 1996.

The final draft text submitted to the Heads of Delegations late yesterday will allow the new issues to come into effect through a “plurilateral” (multinational) arrangement.

These agreements, similar to the Information Technology Agreement or the Environmental Goods Agreement, made by parties of the WTO, are binding to all members even if they fail to participate in crafting them.

According to analysts, ambiguities in the text will bring in the “new issues” on procurement, investment and competition, rules that were rejected at the Singapore ministerial meeting.

“While we concur that officials should prioritise work where results have not yet been achieved, some wish to identify and discuss other issues for negotiation; others do not,” the text read. It concluded that any decision to launch negotiations multilaterally on such issues would need to be agreed by all members.

This means the Singapore agenda can be introduced through an arrangement between WTO countries that find consensus outside the multilateral level.

“The developed countries have insisted that if developing countries want the Doha agenda to continue, they must agree first for the new issues to be part of the negotiations,” it read.

SEATINI International East Africa’s Yash Tandon said the deal was not legally binding and meant the Doha Round was off.

“They are saying that some members want the Doha reaffirmed and others do not which basically means it is not reaffirmed,” Mr Tandon said.

Right to Food Campaign India activist Biraj Patnaik, said the text addresses Doha as issues and not asset of principles which means that it is no longer legally binding.

The text was full of annexes that were not available to the media at the time of going to press and we could not establish where the truth lies.

Mr Patnaik said the annexes will not be binding since Doha, under which framework they are established has been thrown out.

Mr Timothy Wise of Tufts University said the deal was drafted without inclusion of the developing countries or Least Developed Countries.

“It is being offered by the chair after consultation with an unrepresentative group of five countries, the US, EU, China, India, and Brazil. No Africans or LDCs were included in the final drafting, and they are now being presented with a take-it-or-leave-it text. They should leave it, not take it,” Mr Wise said.

This prompted Africa civil society groups participating in the talks to issue a terse statement saying Africa should reconsider its position in WTO, saying the process “has nothing for Africa that our governments can offer to our people”.

“Africa is being marginalised on the very soil of Africa. A likely outcome of this non-transparent process would devastate Africa’s economy and policy space. This will create massive unemployment in Africa, especially for youth and women. It will disposses millions people of their livelihoods and become internal refugees in Africa, and easily half a million people potential refugees heading for Europe no matter what the obstacles,” a joint statement by over 31 civil society groups read.

The draft attempted to rope in regional agreements insisting they have to be aligned to the WTO.

“We reaffirm the need to ensure that Regional Trade Agreements (RTAs) remain complementary to, not a substitute for, the multilateral trading system. In this regard, we instruct the Committee on Regional Trade Agreements (CRTA) to discuss the systemic implications of RTAs for the multilateral trading system and their relationship with WTO rules,” the text read.

Critics will see this as an attempt at preserving WTO’s negotiating framework after the watered down Nairobi deal.


The Standard's slant was certainly NOT the view of a  group of NGO activists from Kenya, Uganda, Tanzania, DRC, Senegal, South Africa, Zimbabwe, Ghana. Zambia, Guinea and elsewhere who issued a hard hitting statement likening the WTO process to a Second Scramble for Africa:

Sex slaves is the worst that can exist in the world. Even I know that it's the oldest profession in the world, anyway it is disgusting to grant body to someone without love or something like this. I have read about the woman, who has four children, husband, but she works as sex worker.. What a pity! Why woman shall work like this? It is not honest. Every girl is a beautiful flower and no one can touch it. She is full of innocent, tenderness and beuaty. Man, take care of their wowen!
But the way article includes the pricelist of sex services. it looks as legal process...https://tuko.co.ke/170181-inside-sex-dens-majengo-estate-including-price-lists-prosititutes.html

What's up, well put together webpage you have got here.
Generic cialis tadalafil 20mg online

These hackers always make a lot of problems for everybody! But it's just experience for us and we don't be sad
https://wikicradle.com