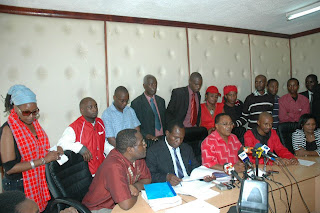 There has been a veritable epidemic of alignments and regroupings across the various elite led Kenyan electoral vehicles as these pin striped three piece tribal chieftains changed their political stripes for the umpteenth time-and presumably not for the last time.

Most of these attention grabbing antics are being done with scant regard for what the constitution and other laws of the land stipulate. The Chair of the Independent Elections and Boundaries Commission was spot on when he fired off a missive to the country’s Attorney General demanding that 100 parliamentary seats currently occupied by MPs who have brashly bolted from the parties that initially sponsored them to the National Assembly be declared vacant.

The Social Democratic Party of Kenya warmly endorses this proposal from the IEBC.

We find it unconscionable that unscrupulous politicians can so casually abuse the trust that voters invested in them.

Those MPs who have ceased to having any feelings of fealty to the parties on whose tickets they were elected should be ethical, courageous and principled enough to follow the historical examples of  Bildad Kaggia and Jaramogi Oginga Odinga who in 1966 resigned from KANU and sought a fresh mandate from the voters when they formed the opposition Kenya People’s Union party.

What the current crop of defectors are doing is tantamount to what in Kiswahili can be referred to as uchangudoa, utapeli na ulanguzi wa kisiasa-roughly translated as “political prostitution, conmanship and mercenary behaviour”.

Beyond this degenerate behaviour that we condemn in the strongest terms, the Social Democratic Party of Kenya denounces the dangerous trend of elite politicians ganging up in parochial tribal and regional caucuses with the intention of pursuing undemocratic chauvinistic agendas. Surely the wounds, traumas and memories of 2008 are still too raw and fresh to warrant this callous reassembly of past, present and future warlords.

What do they have in store for innocent Kenyans this time around?

Recruitment of impoverished youth, into dastardly militias replicating the barbaric, obscene and macabre acts of terror from the civil wars of Sierra Leone and Liberia?

And who are the greedy business men and women who are standing by to bankroll these acts of terror? Will these tribal war chests be replenished from the illegal proceeds accumulated by the  Kenyan narco bourgeoisie some of whom have been named and shamed?

It is simply stunning that less than two years after the promulgation of the democratic Kenyan constitution and in the year that four Kenyans were committed by the ICC pre-trial chamber to stand trial for crimes against humanity as a result of the terrible events which were the aftermath of the disputed 2007 elections we could be dark clouds hanging so ominously over us.

The Social Democratic Party is NOT opposed to alliances, pacts and coalitions among and across political party formations in Kenya.

Indeed our party is already in talks and negotiations with other political parties with which the SDP shares a common democratic agenda based on some minimum demands.

We encourage political parties to seek each other out. As a party of the Left, we actually encourage those formations with a right wing platform to coalesce even as we on the other end of the spectrum identify our allies.

But these forays should be based on ideology, on principle on a clear and rigorous analysis of the current concrete situation prevailing in Kenya and not on intrigue, fear mongering, tribal baiting and threats of violence and terror.

We call on the Kenyan Wananchi to reject all politicians and political parties which appeal to potential voters on parochial conspiracies revolving around region, tribe, creed and personality.

The Social Democratic Party will seek an agenda that is predicated on the needs and aspirations of the Kenyan people. We will foreground the imperative need of implementing and entrenching the values, structures and objectives of the Kenyan constitution.

Our main task is to ensure that we work towards a new Kenya where ordinary women and men live dignified, peaceful and prosperous lives in a society which guarantees them decent jobs with a living wage that allows them to access affordable housing, state subsidized health care and ensures that they are shielded from crime and insecurity. Their children must be provided with high quality education that fast tracks them to jobs and an improved quality of life.

The SDP will work to promote gender equality and campaign against gender-based violence and other forms of sexism, misogyny and patriarchy.

At all times we will uphold the unity and harmony of our diverse people with our unique and rich cultures and traditions.

Our international policies, starting with our neighbours should be based on cooperation and mutual benefit as opposed to militaristic misadventures such as the recent misguided invasion of Somalia. Kenya must work with other African and Third World states to repudiate the immoral and heavy debt burden even as we put concrete steps in place to ameliorate against the devastating effects of negative climate change.

These issues cited here are detailed in SDP’s Minimum Programme which has a very comprehensive summary of the demands that must form a progressive platform for an alliance with likeminded Kenyan political parties.

It is in this context that the Social Democratic Party of Kenya welcomes the initiative of some political parties to convene those formations who converge on a broad, national democratic centre-left agenda to launch a forum which is a counterpoint to those dangerous tribal and regional fear mongers. We are in active discussion with at least eight other parties. It would be premature at this stage to identify by name these particular entities.
Posted by Kenya Democracy Project at 2:15 PM

Hi, i welcome the move to have those sharing a progressive pro people programme to try and work together so that we rid our selves of this chocking CAPITALISM that is threatening our very existence. Former party leaders like anyang and ngilu have left us wondering how commited are the rank and file of sdp. HOWEVER i have to admit that i like the commitment by a good number of you...gudday

This is very good Onyango Oloo. As the in charge of ideology at SDP, I think that you should push for the inclusion of clear anti-capitalist positions in SDP's propaganda briefings. Although attacking the elite is timely, it could have been opportune to mention that this elite operates within a system that allows them to violate the very laws of the land they enact.

In its propaganda, SDP should state clearly that it will nationalize land as the basis of land re-distribution; nationalize the commanding heights of the economy as the basis of national economic restructuring; seek out workers for elective positions; nationalize public transport to get rid of gangster public transport owners while the Party should also make it clear that it will arrest anybody who has ever been named in mega corruption scandals (if they are alive), tried and, if found guilty, jailed.

As a Party on the Left, the SDP should state that using the massive resources from nationalization program, the Party will guarantee free education up to university, free medical care for every Kenyan and better living conditions for the working people.

The SDP program is full of slogans with occasional deviations into Letf wing rhetoric that does not even appeal to the worker. The Party runs the risk of being seen as another sloganeering Party with the difference that it claims Left wing orientation. Given the rate of inflation occasioned by the capitalist crisis, to what level is SDP prepared to raise the minimum wage of Kenyan workers if it ever comes to power?