Who Is Afraid of Big Bad Bad Biwott?

1.0. "Shiku" Kicks Off the Biwott Debate

I have been following a semi-private online discussion on an informal listserv that I find myself temporarily on.

The conversation was kicked off by a patriotic sister based in Kenya who goes by the name "Shiku". Briefly, she is quite concerned about the prospects of KANU era Svengali and accused

Ouko killer and Goldenberg jambazi Nicholas Biwott joining the Kibaki regime as a minister. It is easy to see why she and millions of Kenyans would recoil in horror at the very idea of a Biwott restoration- months after his own moribund party KANU rejected his doomed bid for leadership and in the wake of adverse publicity from the inquiry into the political assassination of Robert Ouko and the rampant looting that is better known as the Goldenberg scandal. In 2002, the possibility of defeating Daniel arap Moi was not as exciting as the potential for finally prosecuting the former Energy minister who had chilled the hearts of many a journalist with his libel actions. I remember being among the delirious hordes who ululated for days on end, crowing ourselves hoarse at the coming comeuppance of Nicholas Kipyator Biwott.

And now in mid to late April 2005, far from ordering his political casket, Biwott is selecting his vintage mvinyo to mimina when NAK insiders complete the resurrection and rehabilitation of the so called Total Man.

will soon be appointed by 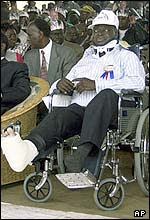 President Kibaki to the cabinet.

Biwott himself confirmed the rumours by repeating them boldly to Kenyan journalists.


2.0. Why the Mount Kenya Mafia Needs Biwott and the Rift Valley Mafia

None of this surprises me at all.

In a message I posted on one of the Kenyan discussion boards way back on Thursday, December 18, 2003 at 2:07 am EST I had predicted the following:

But I think that NAK’s trump card will be in KANU. Already all the Central Province MPs with the notable exception of Uhuru Kenyatta have practically defected to NARC. So have Muite and Munya in Safina. But the prize pick will actually be some elements of the so called Rift Valley Mafia led by Nicholas Biwott. One of my well-placed informants intimated to me not too long ago that Mukhisa Kituyi is the link man between the RVM and the MKM.

Remember the old schisms in KANU? I do not see Nyachae working hand in glove with Biwott and that is why I see KANU splitting down the middle within a year or so with the Biwott faction going to NAK...Will a Rift Valley Party be formed? Time will tell.

Kenyans have only themselves to blame for elevating the pint sized Total Man to the point where he is this towering and menacing political Shaquille O'Neal.

Those of us who retain our Marxist-Leninist approach that is grounded on sober class analysis find nothing strange in one of the richest men in Kenya(Nicholas Biwott) scheming to get back to the main source of wealth in Kenya (the state looting machine controlled by whichever political gangsters are running the so called government of the day). Kibaki happens to be the President and for Biwott, going back to cabinet is a savvy business decision.

He is aware that it is all about nipe nikupe, yaani scratch my back and I will scratch yours.

The badly battered and weakened DP dominated NAK outfit needs a beach head outside the Mount Kenya area- there are large chunks of politically hostile territory dotted all over the country:

Western Province is controlled by FORD-Kenya and to a lesser extent, the LDP; Nyanza is practically LDP territory with the notable exception of the three districts of Gucha, Kisii and Nyamira where the waning Nyachae factor may be replaced by something new, but definitely not pro- Raila, given the depth of anti-Luo hostility I have seen displayed by well known Kenyan elites from the Abagusii community online and of course, the tribal arithmetic has tended to divide the Kuria community along factional lines with KANU often the beneficiary; LDP is still the party to beat in Nyanza notwithstanding the NAK inroads in enclaves like Rarieda and so on; the Rift Valley is KANU, but with a significant toe hold by Biwott’s Rift Valley Mafia faction and with urban areas like Nakuru and Naivasha providing breathing spaces for some of the NAK forces; even though the conventional wisdom is that Central Province is NAK territory, people may shocked because of the surging Uhuru factor and the unpopularity of people like Murungaru and Kibaki in their own Nyeri backyard; Eastern is a toss up between the dominant Ngilu and Kalonzo clout in Ukambani, the power of the Meru Mafia and of course the silent strength of the other parties among the Borana; North Eastern is up for grabs with the likely beneficiaries being LDP and KANU; the Coast Province is the most complex because of concerted attempts by Wapwani to carve out their own regional agenda distinct from the LDP- NAK schisms- but I can safely say that the biggest losers are the arrogant power vampires in the Kibaki kitchen cabinet because they remind watu wa Pwani so much of the haughty Kiambu Mafia who looted beach properties, ruby and other Coastal resources in the seventies during the time of Mzee. The major urban areas of Nairobi, Mombasa, Eldoret, Kisumu, Nakuru, Kitale and so on are more difficult to map out since the electorate in these areas tends to be more politically and ethnically diverse and some would argue, probably more ideologically sophisticated.

3.0. A New Way of Doing Politics in Kenya

But all these are factors that keep Kenyan MAINSTREAM wanasiasa restless and sleepless.

I strongly suggest that it is time to put in place a different paradigm, a different way of doing politics in this country that we call Kenya.

How about if we turn our backs completely on the old KANU way of politicking?

How about if we turned our backs on the politics of ethnic arithmetic?

How about if we turned out backs on the politics of let’s together and loot the Treasury?

How about if we turned our backs on the politics of “Mwakwere, I will let you appoint your own sister as an ambassador if you can deliver all those Digo warriors to NAK?”

How about if we turned our backs on Kibaki, Raila, Kalonzo, Uhuru, Awori, Kombo, Mudavadi, Nyachae, Ngilu, Mungatana and all those regional tribal chieftains?


4.0. Before We Prepare the New Dish, We Need the Ingredients of the Recipe, Ama?

Of course we can.

First, by forgetting about contesting the next elections and winning the Presidency.

Second, by forgetting about whose turn is it to grab and loot.

Third, by forgetting about America and Britain and Canada and Germany and Japan

Fifth by practicing what I call “Divide and Unite” politics- as in dividing the Wabenzi and uniting the Wananchi.

Sixth, by running away from the seminar rooms of Nairobi, Mombasa, Kisumu, Eldoret, Nakuru and retreating back to the gichagis in the rural country side.

Seventh, by finally abandoning the fence-sitting, two faced wishy washy middle class contingents and basing the BULK of our political organizing among the actual workers wherever they are and the small farmers and peasants wherever they are.

Eighth, by ensuring that Kenyan women control 65% of the top positions of any structures that we create.

Ninth, by consciously integrating Kenyan youth in all political endeavours.

Tenth, by harnessing the political skills of Kenyans abroad.

And that is just the beginning.

I have a draft of a manifesto for a new party that will live up to this vision.

But there is more to building a movement-than just drafting a pronunciamento in far off Montreal.

In any case, what do you think I am-stupid or something?

I will not post that document on the internet.

Two of my friends in Nairobi recently emailed me about this and to those two I say:

Give me feedback on this prologue and I will swing the rest of the dossier, ama?

Psst...I had said something similar and familiar sometime back, remember?

Onyango Oloo
Montreal
Posted by Kenya Democracy Project at 7:16 AM