PS: Thanks to Nyambura Susan and Kamale for correcting the Gikuyu misspellings from the first draft. We live and we learn-Oloo.


A Direct Message from a Simple Kenyan Called Onyango Oloo

1.0. What Is More Treacherous?

The uncertain weather which changes day to day here in Quebec or the the flip flops of a tainted official in the Kenyan government?

It sure is a tough call.

Just two days ago the streets of Montreal were experiencing an illusory summer warmth smack in the midst of the most frigid fractions of the calendar. Today I was viciously smacked by the chilling winds and the relentless blasts of needling snow piercing the pores on my face as I made my way to work.


2.0. Kiraitu's Sexism and Ringera's anti-Semitism reveal the true Underbelly of the Parvenu Desperados in Nairobi

Way back in 1991 I pissed off this Caucasian Australian Leftie fellow who was married to a South African activist in the Greater Toronto Area. I am not sure what it was all about, but in a heated moment of our feisty exchange, he blurted out something about how I should "Watch your mouth BOY." The moment he uttered that epithet, he flushed deep crimson and fled from the scene of the stand off. I was just stunned because never in a million years would I have expected those racist condescending words that are considered quite offensive Down Under would ever slide from the mouth of this sanctimonious so called "anti-imperialist."

What an eye-opener that remark was!

It cured me of my naivety about the stubborn survival of racial prejudice even among the "most progressive" sections of people.

From that period I also started examining my own internalized baggage of sexism, misogyny, ableism and other isms. It is still painful when our sisters remind all our brothers(and I am including myself here) of this or that neanderthal chauvinist remark, practice or trait.

That is why, earlier this evening(Thursday, February 10, 2005), as I scanned stories on CNN, Reuters, the BBC , VOA and the Kenyan press featuring

angry protesting Kenyan women who virtually invaded the offices of

not too long ago was posturing as one of Njeeri wa Ngugi's most earnest and compassionate public defenders, I checked myself from jumping into the finger pointing fray.

Every man I know has the active potential of uttering a gaffe very akin to what was uttered by the Justice and Constitutional Affairs minister.

There is absolutely no reason for complacency among any of the men out there. Kiraitu's sexist outbursts indicts ALL of us Kenyan men. How many times have we guffawed at a so called "joke" which is just repackaged misogyny?

I am surprised that no one noticed the equally offensive comments from Kiraitu's buddy and former law partner,

Aaron Ringera who was actually worse by not only trashing women but reviving yet another needless anti-Semitic canard in justifying the See No Evil monkey blindness of the NAK gang.

Those deranged outbursts aside, one can see vividly that the days of Murungaru, Murungi, Mwiraria and Co Ltd are NUMBERED. When Mwai Kibaki gives the go ahead for the vicious shoka to come down, separating the trio of the above heads from the bodies of the owners you know that the imperialists are serious about turfing out the NAK back room boys.

I already alluded to this in my last digital intervention.


3.0. Is the NARC Amoeba Sub-Dividing or Dying Out Completely?

The statements of Anyang' Nyongo, 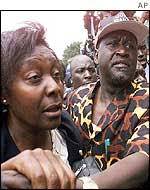 Charity Ngilu and Raila Odinga represent a solidifying of the re-alignments in the Kibaki cabinet with the most likely secondary losers being the allies of the soon to be neutered M,M,M,M,M and M, If one were to degenerate to the tribal arithmetic so adored by Kenyan petit-bourgeois pundits, one can safely predict the demise of the powerful Meru elite who hijacked NARC in January 2003. So, if I was Muthaura for instance, I would perhaps consider seriously the prospects of getting to know my grand-children better- in a rural setting in eastern Kenya. If I was Murungaru,I would call Paul Muite and broach the subject of professional fees for an up-coming defence. If I was Mwiraria I would ask my friend Kiraitu to talk with his former partner

Kamau Kuria about doing some advance forensic research for the inevitable discovery phase of a long-drawn trial. If I was Ndwiga I would fly out to Antigua or Estonia and chill out there-without doing stupid like attempting any sudden withdrawals at any overseas accounts.

The Nyeri, Kiambu, Muranga, Kirinyaga and Rift Valley based Gikuyu comprador bourgeoisie must have an exit strategy which is well thought out if they want to remain at the centre of governmental hustle and bustle. The smart ones like

Njenga Karume (he is not a stupid man, do not let his illiteracy fool you) have allowed the likes of Chris Murungaru to self-immolate, wakijikaanga na mafuta yao.

his annointed political son Uhuru Kenyatta- and perhaps confident thata new alliance with the KANU based Gikuyu elite may salvage the Central Kenyan contingent of the country's comprador forces from the political doldrums. However, I still stick to my contention that KANU is a party of the PAST, not the future.

It is all very fluid right now among the ranks of the Kenyan elite. The cards are being held by the Kamba fraction of this elite with the Luhyias being crucial to anyone's plans to supplant the discredited NAK forces. Raila Odinga and the LDP will have to decide very quickly whether they will jettison Kalonzo Musyoka as their flag-bearer in the light of the rapid rapprochement between Ngilu, Kalonzo, Kibwana and others who are very influential with the donors. Unfortunately for now, the Kalenjin elite are too far removed from the centre of political power to make much of an immediate impact even though they are likely to be the most UNITED ethnic bloc come 2007-Biwott's current jeremiads notwithstanding. Elites representing cultural and religious minorities are going to do the nipe nikupe scratch my back/I will scratch yours routine.

Mark you I am talking very short term assuming that there is an imminent change of the guard with the imperialists playing a decisive role in the outcome.

So what should Kibaki do?

Actually, that was the entire point of this essay.


4.0. Memo to President Kibaki-You Have FAILED the Kenyans Who Elected You With a Landslide in 2002

Mwai Kibaki is the worst President Kenya has had so far. 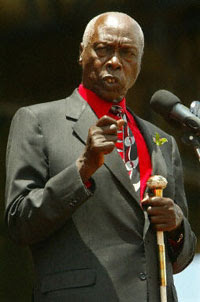 Daniel arap Moi was the most repressive and

Mzee Jomo Kenyatta was probably the greediest- but Kibaki takes the cup; for unsurpassed political incompetence and abdication of leadership. His two predecessors were blood-soaked tyrants- but they knew one or two things about running a tight ship.

Mwai Kibaki has been Ghost at Ikulu, the UNSEEN and UNHEARD President.

Kenyatta had high blood pressure and Moi seems to be still as fit as a fiddle despite the decades long allegations about an incurable case of throat cancer-from a head of state who opened his kinywa every single day by a rural roadside somewhere. Mwai Kibaki's State House has been a PERMANENT INTENSIVE CARE UNIT with the clearly unhinged invalid embarrassing himself by screaming "Kumbafu" at a completely befuddled driver.

The lack of decisive resolution to the constitutional review process and the attendant stand off and stalemate between fractious and dueling cabinet team members makes the Israelis and the Palestinians look like a set of Siamese Twins who adore each other to death.

Kibaki does not realize that today he is unable to do anything to Kiraitu and Murungaru because the Othaya MP abdicated the Presidency sometime soon after Wamalwa's death to this devious duo. Mwiraria and other Kibaki loyalists are up to their gills in grand corruption scandals and the President is implicated by association-even though we can not rule out the possibility that Kibaki is "eating" via remote control.


5.0. Prescription to Resolve the Crisis WIthin The Kenyan Government

I will do it in point form:


a. Sir Edward Clay should keep his long British nose out of the Kenyan cabinet.
b. Kibaki should go on live national television and announce his resignation on health grounds. The man is about to croak, like I have said time and time again.
c. Before he picks up active golfing again, Mwai Kibaki should do the entire country a huge favour by dumping the following figures into the nearest political dustbin: Kiraitu, Murungaru, Ndwiga and Mwakwere. Mwai Kibaki should promote Wangari Maathai, three from the following:

Danson Mungatana or Ananias Mwaboza from the Coast; consult with Nyachae and Raila for new Nyanza faces and with Kombo, Kituyi and Awori about the Luhyias. He cannot afford to alienate the Kalenjin elite so he must play his cards right. Pride of place in his major reshuffle should be reserved for Charity Ngilu because she is the single most formidable IMMEDIATE, as opposed to long term OPPONENT and RIVAL within his government. Raila Odinga will bide his time for the next few months. This reshuffle should have only one purpose-reassuring Kenyans and the international community about stability and commitment to fighting graft.
d. The MOST IMPORTANT ACTION however will be to expedite the constitutional review process to a date earlier than the one proposed by Kiraitu. Here an alliance with the LDP AND civil society forces like the Ufungamano, NCEC and other pro NAK forces is CRITICAL.

e. Hopefully Kibaki will do the wise thing and step down quickly- otherwise he will end up dying in office. Interim President Moody Awori should DISSOLVE the government and announce fresh new national elections-as soon as we have a new constitution in place-something that can happen in June with the elections in October of this year and a new government in place by Jamhuri Day 2005.

All of these suggestions are being made as if I am Kibaki's political consultant-which I am not.

6.0. What Will Happen if Kibaki Refuses to Fire Murungaru and Kiraitu Etc?

Well, the imperialists will simply remove him from power and install their own neo-colonial puppets mouthing the mantras of transparency, accountability and good governance.

I hope I have been sufficiently forthright and blunt.

Kibaki should immediately resign as the President of the Republic of Kenya after firing Murungaru, Kiraitu, Ndwiga and Mwiraria in addition to reshuffling his cabinet in the process of announcing a firm time table to adopt a new constitution and have the first true multi-party elections under a democratic constitution.

I will be extremely surprised if ANYONE agreed with ANY of my recommendations.

Those who think I am harsh on Kibaki should perhaps recall this.

Onyango Oloo
Montreal
Posted by Kenya Democracy Project at 7:45 AM