Mr. President: Be Careful What You Ask For

“When history repeats itself, it is always more expensive”-Kathy Hardall 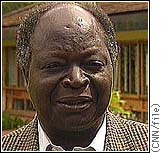 his henchmen and henchwomen

are courting DISASTER with this constitutional fraud they are trying to pull on Kenyans. My fear is they may just get the disaster they are asking for. Between you and me I will tell you nobody wins against the collective will of the masses. Moi learnt that the hard way and Kibaki is tempting us to give him his just rewards. Karibu Mzee. Tutamenyana.

Kibaki is begging for a confrontation with Kenyans and I think it is about time we gave him exactly what he is asking for.

Former President Moi
survived the same particularly in the last decade and a half using a mix of brute force and compromises here and there and by 2002 he had exhausted his arsenal of repressive tools and the Narc liars came on the scene to take advantage. Well we are catching up with them real fast. If Kibaki doesn’t watch out and forces Kenyans to revive street fights and mass action he might end up back in Othaya or his Muthaiga home way before 2007.

We welcome the confrontation between the Kibaki/Muruingi controlled parliament and the sovereign people of Kenya any time. To borrow Dubya’s infamous words: “Bring it on”. When the dust settles victory will belong to the people of Kenya not those cowards hiding in the so called August House to rob the people of their hard earned constitutional gains.

Our nation and peoples have invested sweat, blood and lives of countless Kenyans to get rid of a constitution that was based on presidential dictatorship, the same nonsense Kibaki wants to perpetuate. If we have to invest more of the same, we will do so without any hesitation whatsoever. Some people were stunned when a well-known Kenyan human rights activist and lawyer trashed Mr. Munyaos little ministerial flag and proceeded to lay a well placed slap on another assistant minister. People will have to understand the level of anger Kenyans have regarding the shameless and arrogant betrayal Narc has taken us through. When the action starts cabinet ministers might end up being an endangered species. No kidding.

The trouble with Kiraitu and his gang from state house is that they see victory just for today and don’t give a damn about what tomorrow brings. That is why he is insulting those opposed to him bulldozing a constitution for Kibaki as noisemakers. He doesn’t understand that there are enough noisemakers and millions of their supporters to make the whole country completely ungovernable and chase him back to his law firm. Anyway now that his former law partners Kamau Kuria and Ringera are all minting millions every month from Kenyan taxpayers he is probably set for life.

Kenyans should be happy that the LDP and a section of Kanu has pulled out of the massive constitutional fraud going on with those crooks in parliament. The Naivasha Accord was the most dangerous thing because Kiraitu had managed to con the LDP and Kanu through the Parliamentary Select Committee to join them in trashing Wanjiku’s constitution. The trick is that they were going to hide under the 65 per cent clause.

Mercifully for us, Kiraitu is so greedy and so paranoid that he shortchanged his buddies who are now furious with him. This is what is going to save the situation. Kiraitu might end up not even getting what he wrenched out of the PSC in Naivasha, but here we are dealing with a fellow who counts his victories by the day and today he feels he is on top of the world. Boy is he ever going to come down crashing. Just watch.

Lets look at the possible scenarios and evaluate where the interests of the masses opposed to presidential dictatorship lies.

I’ll start with the best case scenario. This thing is going to court obviously. In the next few days we will hear that a court challenge has been filed to declare the recently passed bill illegal and unconstitutional. If our courts were to be consistent and take precedence from the Ringera ruling it would be a slam dunk to declare the new Constitutional Amendment Bill illegal. It is mind boggling that Kiraitu and his clique are telling us this bill needs a simple majority because it is not about amending the constitution yet the bill itself is called Constitutional Amendment Bill. Is something wrong with my English?

If the courts were to declare the Kiraitu amendment bill illegal, our country would be spared the inevitable showdown, but where would that leave Kibaki and his people? Will they try other tricks?

Whatever the case we might then end with the Bomas Draft as it is taken to the referendum and then the showdown will be at the ballot box. The pro Bomas folks will fight to get it passed and then the anti-Bomas would fight to block it. I am positive in that fight the pro Bomas would win hands down. The last polls they did, over 60% of Kenyans supported Bomas Draft. But polls are another thing altogether and I would rather wait and see.

The next scenario is that somehow Kenyans are fatigued with the constitutional battle and are willing to let parliament mutilate the Bomas Draft and take it to the referendum to install King Kibaki III. My guess is a referendum on a constitution written by Kiraitu, the most despised public figure in Kenyan politics, may end up as a major disaster for the Kibaki regime.

Nobody is going to look at the other good things they tell us are in the constitution. As long we are still retaining presidential monarchy, Kenyans will throw the garbage out, as they should. This is where the likes of Kiraitu are so short sighted. They need Raila and his folks campaigning for the Draft. If there is something Kenyans have learnt, it is the fact that Raila is a master organizer and superb campaigner. Most of the goofs surrounding Kibaki have no constituency outside their villages. I for one would be thrilled to have Agwambo on our side in any campaign and we are lucky Kiraitu is pushing him to our side. Welcome Tinga and boy do we have work for you?

What happens if Kenyans vote against the Kiraitu/Kibaki Draft? Kibaki would have to step down and call for fresh elections. It would be time for regime change and the cheeky part in me tells me this would actually be a sweet revenge to sweep these liars and conmen out of power. One thing is certain it would be drama and one way or the other the country would change irreversibly. So it is all good.

The third and the most likely scenario is actually also the worst case scenario. This is the rebellion route and this is where the boycott by more than 80 MPs becomes extremely significant. People with scant knowledge of historical contradictions are already screaming about the old Kanu and new Kanu coming together just because they want power. First of all there is nothing wrong with the LDP and Kanu wanting power. Both are legal political parties with significant representation in parliament. What else are they doing in parliament if they don’t want power?

The significance of this block of politicians refusing to rubber stamp what the King at State House wants is that they bring the much needed muscle to do battle with the constitutional thieves. The movement to protect the Bomas Draft from the hyenas in parliament already exists and is very articulate and passionate about their mission. What we really needed was the muscle to mobilize the people of Kenya to take on the State House gang head on. You can say all you want about Raila, Kalonzo, Uhuru and even the Rutos, but one thing for sure they have the ability to relate to Kenyans and fight with them to finish this long journey. We have been hijacked, but we might end up hijacking the hijackers and that is when the real fun will begin.

The tricky part here is that for Raila and other LDP cabinet ministers to go full stretch in fighting with the masses for a democratic constitution they would have to either resign from the cabinet of be fired because this is not going to be about holding press conferences. This is full time combat duties with the masses which might lead to complete removal of the Kibaki regime from power. It is that serious.

Mass action is inevitable and Kenyans are so mad with Kibaki and his gang on so many things that once the mass action begins it is going to go way beyond just the constitution. The monsters like Anglo Fleecing are on peoples’ minds, the Goldenberg farce of the century and absolute arrogance of Kibaki’s people. All these issues are really bothering Kenyans and if they are forced to take back to the streets, it is going to be intense and furious and then Murungaru and General Ali can bring their boys to put up a show.

If the police are smart they should keep off and let the rallies be peaceful just like we are seeing today in Ukraine where another political thief is trying to rob the electorate of their real leaders. If the police do again what they did in Kisumu and Nairobi in the last Katiba Watch rallies, shooting people, it is going to get real ugly and could escalate to a full rebellion in many parts of the country. What is ahead of us is deadly and those celebrating the so called NAK victory in parliament should take off their blinders and face the reality that Kenyans will not allow those clowns in parliament to impose a constitution on us. It won’t happen ever.

Those of us outside the country should get ready too. In 1990 we took over the Kenyan Embassy right here in Ottawa, Canada’s capital city and chased the Ambassador Mr. Peter Nyamweya back to Kenya. Kenyans all over the globe rallied in the 1990s fighting for democracy. If forced to, we will resume those actions without delay.

Everybody should be on full alert. We have been served with the notice and there is a lot of combat duty ahead of us. We will rise to the occasion and do what must be done to stump out this ridiculous culture of every president coming to office and immediately minting their own constitution. It must stop and history has given us the responsibility to stop the madness. We welcome and cherish the opportunity to do our future generations a favour. This war must be fought now so we can truly embark on nation building. Enough of the foolishness. Wembe ni ule ule.

The writer is a human rights activist.

Fantastic blog. I like the way you integrate the photos with your text. The men in the photos on "Mr President: Be careful what you ask for" look very familiar. I am sure I have seen them somewhere else. Probably in Nigeria spewing out pretty much the same crap. I hope the Kenyan people are less defeatist than their brothers and sisters in Nigeria where we always end up backing down or being bought off.