A Pictorial Essay by Onyango Oloo

1.0. September 12th: A Revolutionary Memory in Ethiopia and Bloody Date in South Africa

If you did not think of ETHIOPIA and SOUTH AFRICA yesterday, you are already a DAY TOO LATE.

For different reasons, September 12th is a significant date remembered in different ways by different people in both of these African states.

Let us start with our neighbour to the north.

Did you know that the present Ethiopian flag is the FIFTH one within the last fifty years?

These flags reflect the various transitions in contemporary Ethiopian history.

represents the neo-colonial/feudal era of 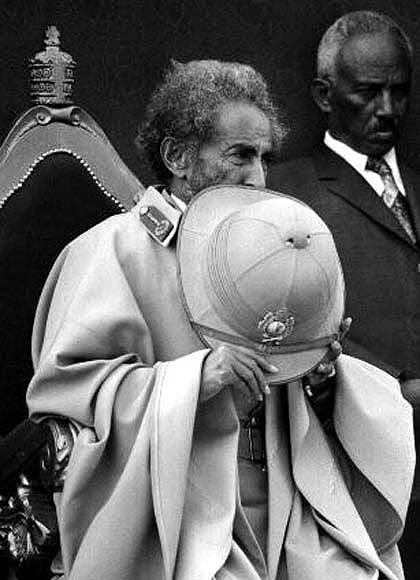 Emperor Haile Selassie's venal aristocratic rule. Quite frankly, I always bite my tongue when my Rasta friends literally worship this expired despot as a deity. Talk about goose-bump inducing spectacles!

was in effect from 12 September 1974 when the Emperor was deposed to the 21 of March 1975- a period of transition when the radical military officers close to Mengistu consolidated their power and effectively eliminated their more liberal allies and rivals.

is associated with the Dergue period

between 1974 and 1991 when some left leaning officers seized power and proclaimed that they were transforming Ethiopia along Marxist-Leninist lines. Given the fact that they ended up slaughtering tens of thousands of socialists in the process of creating Africa's largest army and fighting some of the bloodiest internal and regional wars, it is very debatable whether they were genuine revolutionaries- not withstanding the fact that they did carry out wide ranging agrarian reforms in the mid 1970s and provided military facilities for dozens of liberation movements including the ANC, ZANU and others.

In fact Mengistu changed his own flag in

1987 when he started veering away from his rhetorical commitment to "scientific socialism"- a period that saw him at one point work closely with Israel-after years of being one of the PLO's staunchest allies in Africa!

was hoisted by the TPLF dominated EPRDF conquistadors led by Meles Zenawi who moved from being on the LEFT of the pro- Moscow Worker's Party of Ethiopia to being among Uncle Sam's darlings on the continent..


Click here for an overview of the Ethiopian Revolution from a conservative, Western security source

There is more information available here as well, especially relating to the historical background to the revolution and the socio-economic conditions prevailing in Ethiopia at that time


2.0. The Dreams of December 2002;Lamenting the Culture of Assassinations in Kenya

A few days before the historic multi-party elections which swept KANU out of power, I composed the following ditty for the current tenant of State House:

Obviously, were I to try my hand at it today, I would come up with a VERY DIFFERENT SONG.

Do Klan Revolution are a militant, Nairobi based underground anti-imperialist hip hop group. They composed a song asking what happened to Kimathi, Mboya, JM Kariuki, Ouko, Sosa, Lumumba, Che and many others. It proved to hot for Kenyan commercial FM radio. The song is called "Roho Juu" and speaks for itself.

Almost a year ago today, on a Sunday afternoon, Dr Odhiambo-Mbai was sitting peacefully in his own living room in his home just off Ngong Road, not too far from the Ngong Hills hotel when some three young people burst into his house and after a physical struggle where he resisted vigorously, he was shot- dying later in hospital.

Let us not mince words.

NAK insiders ordered the elimination Dr. Crispin Odhiambo Mbai in order to send a chilling message to Raila Odinga. It is an established fact that the late don was considered a trusted aide and confidant to the LDP leader and Kenyan political powerhouse. Dr. Odhiambo's neighbour Norman Nyagah a rabid supporter of President Kibaki was later on fingered by the suspects as the mastermind who gave them the gun and the muthendi.

The involvement of the NAK top brass in the execution of the soft spoken Chair of the Devolution Committee at Bomas has of course ruled out the likelihood of the true killers of Dr. Mbai being brought to justice. Several months ago, the Standard traced the hitman to Tanzania. Yet we have not seen any efforts to extradite the prime suspect. If the Dodoma authorities under President Nyerere, of all people could round up and hand over 19 Kenyans who were already under the protection of the United Nations as bona fide refugees(in November 1983) to the waiting Moi-KANU security forces at the border, then surely, a two bit hoodlum with the blood of an innocent democrat on his hands should not be whistling and strolling leisurely as a free man in Dar es Salaam...

As we write these lines, it is in fact

David Makali, one of the two courageous Standard journalists who broke the story of NAK connection to the killing who has today been found to have a case to answer- not Norman Nyagah who is recuperating in a hospital in the Kenyan capital after a savage and macabre attack.

I was in Kenya when all this was happening and kept every single newspaper I bought in the one and half months I was in the country.

Look through the following articles and see what a COMMENDABLE and NOBLE role KENYAN JOURNALISTS- including PHOTOGRAPHERS are doing in bearing witness to the DEGENERATION of the Kibaki regime into a cabal of tribalists, killers, thieves and shameless liars.

4.0. Pictures Are Worth Thousands of Words

Time for you to OGLE:

5.0. Said All I Wanted to Say LAST YEAR when it all Happened

Today I will point to those links of statements I wrote and issued LIVE and DIRECT from Nairobi, including a press conference that was later covered by the BBC, German TV and the Christian Science Monitor.

I actually managed to meet Dr. Mbai(who did his doctorate in Toronto) briefly when I was at Bomas. This was my first report from Nairobi

I was sufficiently at the shocking news of Dr. Mbai's death as to issue this PUBLIC call for the arrest of the War Lords in NARC

I did go over to Dr. Mbai's house to condole with his widow and his mother. I wrote this report from a cyber-cafe located at the nearby Ngong Hills Hotel owned by NAK politician-tycoon, Matu Wamae

6.0. Words of Hope, Words of Anger,Words of Revolution

How can we remember the late Dr. Crispin Odhiambo Mbai?

One of the ways is to keep fighting for a new Kenya, a democratic Kenya, a united Kenya, a non-tribal Kenya and a just Kenya where bloody and mysterious political murders are a thing of the past.

And immediately, we must make a reality what thus far has been a mixture of a wistful dream and recurring nightmare-the struggle for a new constitution.

Between Xmas and New Year last year I sat down and put the following words to a minidisk with Cuban music underneath.

It is simply called
"Katiba Mpya"and speaks of the vision for a different society, currently not in evidence at all...

Warning to my Luo brethren and sistren:

I will BEG your PASIENT KOPARESON Nyikwa Ramogi because I sometimes AOL gi INGLIS and so I start yapping in Oswayo yawa jo THURWA!

And we do all these things in the middle of the night because...

Hey, here is a riddle for you:

Tega and so forth..

I have two mothers. And one of my mothers gave birth to my mother.

Yes, my mother's mother is also my mother, and that is why this song is called "Mamangu Kenya"


And let us close off with two songs from Nairobi.

Here is Do Klan Revolution once again with
"Vijana Kwa Vijana"

And of course, this recurring favourite of mine"Jivunie Ukenya" by the equaly radically, similarly submerged hip hop crew, Sinpare....

Mbai was killed by Raila. Wacha this propaganda of yours Oloo. Kenya yote knows this. Nyagah stood to gain nothing by killing Mbai.
RAILA KILLED MBAI.