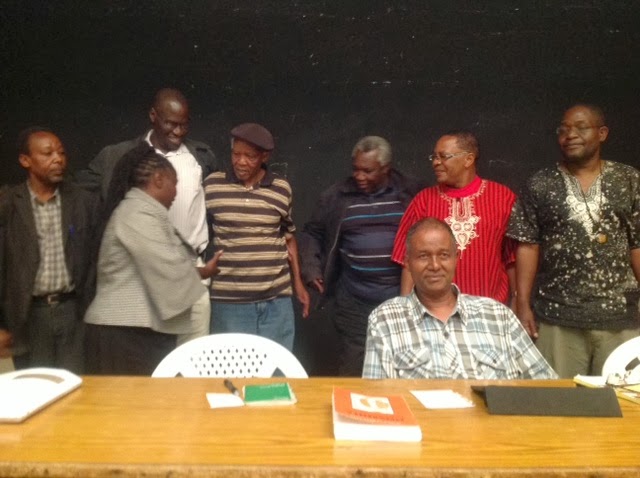 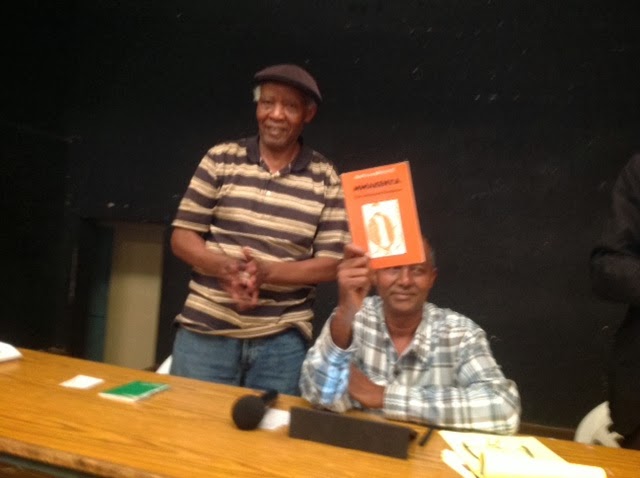 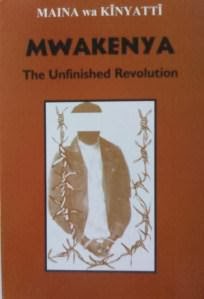 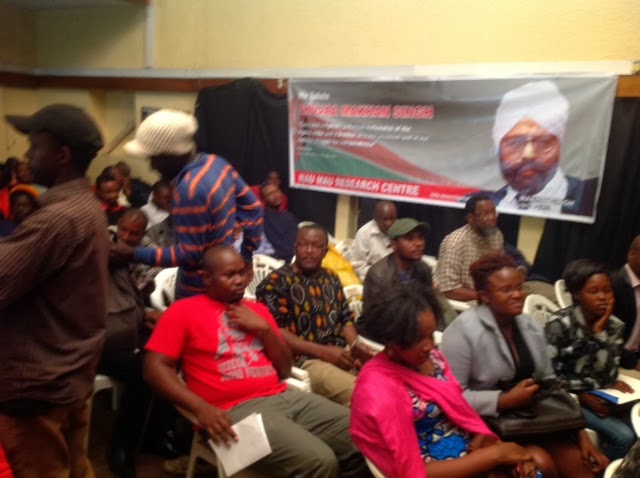 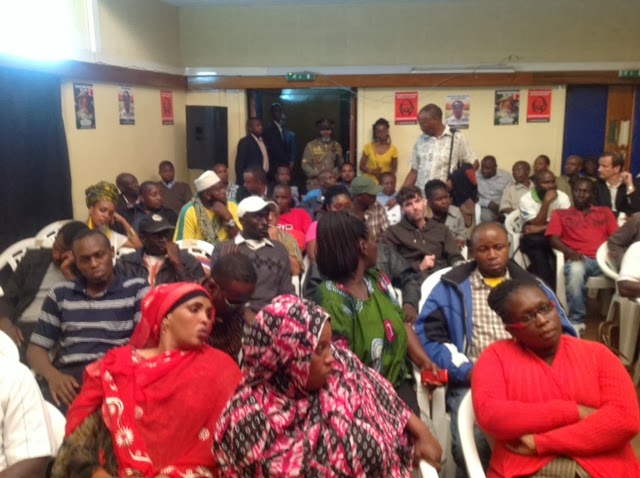 were on hand at the February 18th unleashing of Mwakenya: The  Unfinished Revolution written by historian, radical lecturer and activist organizer Maina wa Kinyatti who consciously picked on the 57th anniversary of the execution of Kenyan independence hero Dedan Kimathi wa Waciuri to make his powerful statement about the role of our socialist comrades in the struggle for freedom, social justice and sustainable development in this country.

For a video recording of the event, visit the following youtube link:

The struggle for democracy, equality and social justice in Kenya has unfolded over many decades.  From the early peasant jacquerries and anti-tax revolts at the turn of the 20th century through the trade union led strikes of the 1930s and 1940s; the Mau Mau armed struggle of the 1950s, the nationalist strivings of the 1960s and the long drawn clamour for multi-party democracy and constitutional reform over the last thirty years, there have been heroes and sheroes celebrated and immortalized in song, in poetry and even statues erected in their honour.

One epoch in that epic story of Kenya’s freedom fight has been almost erased by latter day chroniclers of our history. That is the period of the valiant resistance movement against the KANU one party tyranny from the late 1970s to the early 1990s-the time from the death of Jomo Kenyatta to the twilight years of Daniel arap Moi.

This was the golden age of the Kenyan underground movement when disciplined, militant patriotic comrades were fighting for a new Kenya. They did not just want change in Kenya; they demanded a revolutionary transformation of Kenya, an upheaval in Kenya that would bring the oppressed from their down trodden status to the top where the ordinary women and men of Kenya, the poor and marginalized youth; the exploited villagers in the peasant countryside and the disenfranchised workers in the urban slums would be holding the steering wheel guiding Kenya to a new democratic future. The leaders of the clandestine struggles were revolutionaries committed to a socialist vision.

Yet, when in 2010 when Kenyans celebrated the promulgation of the new constitution, hardly anybody mentioned the Kenyan socialist pioneers who demanded multi-party democracy and social justice long before it was popular and conventional to do so. It was as if they the Mwandawiros, the Miceres, the Njeris, the Omondi K'abirs, the John Munuves, the Chitechi Osundwas, the Kamoji Wachiiras, Adongo Ogonys, the Wangui wa Goros, the Wangari Murikukis, the Shadrack Guttos, the Shiraz Durranis, the Alamin Mazruis and Sultan Somjees did not exist, had never lived and breathed, let alone striking a single blow for progressive change. Today many of them are graying and half forgotten on the margins of the periphery.

Luckily for the veterans of the socialist Left underground, for Kenya, for posterity, they have a writer who is determined to make sure that their glorious chapter is not ripped from the history of Kenya- a history written with their blood and tears, their sweat and sacrifices.

If the Moi-KANU dictatorship and its successor regimes imagine it would thus punish him and ultimately silence him, it was in for a rude reckoning.

So in 2014, he has consciously chosen the 57th anniversary of the hanging of Mau Mau hero Dedan Kimathi wa Waciuri to gift us with his latest opus-Mwakenya: The Unfinished Revolution -Selected Documents of the Mwakenya-December Twelve Movement (1974-2002).

The 440 page book is divided into six parts.

After the preface and introduction, Part One deals with birth of the Kenyan underground movement in the mid 1970s around the time of the brutal and grisly murder of the populist parliamentarian JM Kariuki by assassins widely believed to be working at the behest of Mzee Jomo Kenyatta. Drawing its inspiration and legacy from the Mau Mau struggle of the 1950s, the December Twelve Movement (DTM) derived its name from the date Kenya achieved flag independence, in actuality the date when the freedom aspirations of Kenyans were betrayed and neo-colonialism ushered in. Maina informs his readers that DTM in turn was the baby of the clandestine Workers’ Party of Kenya whose founding leaders were Maina wa Kinyatti himself, Kamoji Wachiira, Adhu Awiti, Amin Kassam, Koigi wa Wamwere and later, Willy Mutunga (the current Chief Justice) Ngugi wa Thiong’o, Alamin Mazrui, Edward Oyugi, Shiraz Durrani, Sultan Somjee, Ngotho wa Kariuki, the late Ngugi wa Mirii, Kuria Muriimi, Kariuki Kiboi and others. The fledgling underground movement took an anti-imperialist, pro-socialist stance, ideology anchored in Marxism-Leninism Maoist  Thought.

The movement was to later launch communication organs, newspapers, journals and publications like Mwanguzi, Pambana and Cheche. At the cultural level the author informs us that DTM was the organizing force behind such militant and patriotic plays like Ngaahika Ndeenda and the Trial of Dedan Kimathi. The movement mobilized progressive lecturers and organized well attended public symposia at the campuses on the burning issues of the day. It recruited students and open minded and radical members of the petite bourgeoisie into its secret ranks.

Before its top leadership was arrested and detained in June 1982, DTM, through its clandestine, type written, cyclostyled photo copied and stapled newspaper Pambana, surreptitiously circulated under the very nose of the secret police, the movement had boldly announced its arrival in the ranks of the opposition at a time when the Moi-KANU one party dictatorship was smugly assuring itself that it had politically throttled all the voices of dissent. Maina wa Kinyatti reveals how even behind prison walls and exile, DTM continued to grow, recruiting within ranks some militant university students jailed on sedition charges. The author states that in 1984, the movement morphed from the founder members of DTM mentioned in the book.

The rest of Part One is taken up by a detailed narrative as well as a very frank analysis and critique of the later history of the movement when according to the author it was taken over by what he refers to as “opportunists, sectarians and ultra-leftists” who later transformed it into Mwakenya with at first disastrous consequences. Maina wa Kinyatti chronicles the inner party debate, struggle and rectification which later to the expulsion of the “liquidationist Dar clique”.


It is worth reading and re-reading this section on criticism and self-criticism of the Mwakenya phase of the movement because it appears a distinct departure and a fresh gust of air from Maina wa Kinyatti’s previous public views on Mwakenya-especially his last major work, History of Kenya 1895-2002, where to many comrades and observers outside the movement Maina appeared to endorse some of Mwakenya’s gregarious errors through silence.

It is curious nevertheless, to note in passing that this 2014 internal critique by Maina wa Kinyatti appears to echo very closely and loudly another trenchant critique by a comrade outside Mwakenya, using the pseudonym Zinduka U Pambane who had penned a very thorough expose titled “Every New Beginning Has an Old Origin” appearing in a semi-covert ideological exile-based journal called Itikadi way back in January 1995.

Part Two which spans 137 pages, showcases the DTM publications from 1974 to 1985, reproducing several copies of Mwanguzi, Pambana, Mpatanishi, occasional anonymous leaflets and other communiqués and pronunciamentoes from the movement.

Part Three provides a selection of Mwakenya documents covering the period from 1987 to 2001 including internal position papers, statements, study group observations and reflections.

Part Four lays bare in the public domain in the first time outside the close circle of Kenyan exiles and activists in Britain and the United States, excerpts from the archives of Ukenya, formed in the UK in the 1980s to confront the Moi dictatorship. Among the UKENYA documents is to be found its 1987 Manifesto; a public address in  London by UKENYA Chairperson Yusuf Hassan (currently the MP for Kamukunji) and a speech delivered by Abdilatif Abdalla (renowned Kenyan poet) at the 7th Pan African Congress held in Kampala in April 1994.

Part Five, beginning on page 417, is a reproduction of the 2001 Mwakenya Harare Declaration pledging that it was a year dedicated to the movement’s renewal. That document among other things, resolved to ”clarify the name of the party and call it DTM-Mwakenya so as to reflect correctly, the history, continuity and the main streams that have gone into making it”.

Part Six is some kind of appendix  consisting of the DTM-Mwakenya Study Guide broken down to organizational aspects like the concepts of the unity of theory and practice; democratic centralism; criticism and self-criticism; dialectical and historical materialism; classes in history; the National Question; Religion; the Woman Question; On the State; Historical Aspects; Africa and Kenya.

At the book launch there were robust exchanges and interventions by a range of the progressive activists who attended. People like Al Amin Kimathi of the Muslim Human Rights Forum; Cidi Otieno of Bunge la Mwananchi,  Suba Churchill of the National Civil Society Congress and Mwandawiro Mghanga, the Chairperson of the Social Democratic Party of Kenya.

purported to do a couple of weeks ago.

As the Chief Guest at the launch Hon. Yusuf Hassan observed:

"Maina wa Kinyatti's book is a very welcome and path breaking book, filling a void that has yawned in Kenyan historiography for decades as comrades who were encyclopedias and reservoirs of democratic and anti-imperialist knowledge like Mwakdua wa Mwachofi, Paddy Onyango Sumba, Githirwa wa Muhoro, George Anyona, Kariuki Gathitu and many others died with their stories depicting their role in the clandestine national anti-imperialist struggles from the mid 1970s to the early 1990s. One hopes that Maina’s book will spur others like Prof. Edward Oyugi, Mwandawiro Mghanga, Chitechi Osundwa, Kang'ethe Mungai, Alamin Mazrui, Micere Mugo, Shadrack Gutto,Nish Matenjwa, Wangui wa Goro, Onyango Oloo, Willy Mutunga, Oduor Ongwen, Zahid Rajan, Abdul Qadir Nassir, Adong'o Ogony, Njeri Kabeberi and many others to pen their own stories further enrichening this important part of our history."

Posted by Kenya Democracy Project at 3:41 AM

There are some dangerous for women around the world. I'm happy that I live in the independent country, I have some rights as men have too, I can wear all that I want. But sometimes I read article about "other" side of women life. So this is one of new article which have been read by mwe - https://tuko.co.ke/180698-countries-ladies-shocking-5-top-lists-dangerous-places-women.html. It's about 10 top dangerous countries for women. How can women live there? I understand that it is their home, but anyway men allow it - in Congo, Afghanistan, India, Mexica, Columbia. They rape, beat, hurt women... There are not human for men, I guess.

What's up, well put together webpage you have got right now.
Generic viagra sildenafil 100mg online