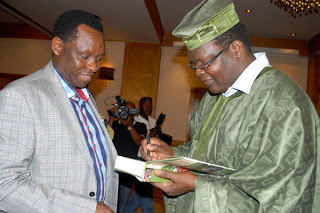 I must say upfront that since I am Miguna’s comrade; since I  was one of the first people to review to the book-after reading it from cover to cover- and since I was the actual master of ceremony at the book launch whatever  I say should taken with the above in context.

It is precisely for this reason that I will confine myself to facts and figures.

First of all, if Miguna had not sat down and written the book (in a few short months) there would have been nothing to launch. So the author has to take the major credit.

Secondly, if a publisher had not accepted to bring out the book, Miguna would be having a very big manuscript in his cabinet and hard drive. Giglamesh Publishing in the  UK did a superb professional job in not only polishing up the manuscript, arranging for the printing, but more importantly bottom-lining the  logistics for the actual book launch. A few months ago I attended a book launch in a parked hall at the University of Nairobi featuring a publication by one of my former lecturers and guess what? There was not A SINGLE BOOK ON SITE FOR SALE. To say that waiting throngs were disappointed is a big understatement.  This was not the case with Peeling Back the Mask, as detailed below.

Thirdly, those of us who were part of the team planning the book launch set ourselves very clear objectives which doubled as our indicators of success:


1.1. Objectives of the  Book Launch:
(a)    Have at least 300 people attend the launch;(b)   Sell at least 200 copies of the book at the launch;(c)    Organize an interesting, engaging and entertaining event;(d)   Get adequate and positive coverage in the print, electronic and social media;(e)   Have an impact in public and national political discourse;

Using the above yardsticks one can gauge whether the book launch was successful or not:


(i)                  Attendance:  The room capacity of the hall provided to us at the Hotel Inter Continental is 500. We counted more than 550 people. Those who attended the event will attest to the fact that people were standing at the back because of lack of seats.


(iii)               Event Programme: We kept it simple and flowing. The Canadian High Commissioner to  Kenya, H.E. David Collins, gave a short but warm address hailing the ties between the two countries and underscoring Canada’s role in supporting the democratization process in Kenya by among other things providing protection to exiles like Miguna Miguna, Adongo Ogony, Onyango Oloo and others, not forgetting supporting the constitutional review process.

The socially conscious and political astute troupe of the People’s  Puppeteers put on a 13 minute skit using their puppets called  In Search of  Justice which received a thunderous standing ovation.

The Principal Guest, Hon. Paul Muite, spoke with courage and encouragement about the main thrust of Miguna’s political memoir.

Onyango  Oloo, the MC for the event, in introducing Miguna Miguna to the podium, drew the connection between the repressive days of the  KANU one party dictatorship which had  hundreds imprisoned for sedition and the achievements of Kenyans through struggle of a new constitution which guarantees rights  freedom of speech and expression and the overall enabling democratic environment which nourished the possibility of a book like  Peeling Back the Mask seeing light of day and its author speaking in public at a five star hotel without being arrested by the secret police.

Miguna Miguna’s remarks have received massive media coverage so I need not repeat them here.


(iv)              Media Coverage: Miguna Miguna DOMINATED the Kenyan media in the week culminating in the book launch. Even today, two days after the event, he is still on the front page headlines. He has been covered by the Daily Nation, the best selling newspaper in East and Central Africa as well as its other affiliates on radio and television-not forgetting their sister Kiswahili publications Taifa Leo and Taifa Jumapili.  The Standard, the Star and the People were not  left far behind. Miguna has had interviews with KTN Television and Citizen Television.  Social media and blogosphere has been abuzz with thread after thread after thread being launched on Jukwaa, one of the leading Kenyan online political discussion forums; Facebook is still sizzling and Twitter is twitching with tweets about Miguna. The coverage, has on the whole been very positive even though there are battalions of Miguna detractors in many corners of cyberspace.


(v)                Impact on Public and National Political Discourse: There have been editorials,  op-eds, cartoons, interviews and commentaries in the media; civil society activists have waved copies of his book in press conferences; politicians of various hues have referenced him in mass rallies; there have been threats to sue him and calls for his arrest. In ODM an entire committee has been set up to rebut the claims he makes in Peeling Back the Mask.

Based on the above objectives and outcomes, was the launch of Miguna’s Peeling Back the Mask a massive success or dismal flop?

You be the judge.

Traitors-in-chief you people, scoring own goal. Onyango Oloo you all know that RAO is Kenya's last line of defence against battalion of retrogression , ganged up and determined to reverse the gains attained. When you callously smear RAO as Miguna is doing; Whose cause are you advancing, reform or impunity? Who are buying 2000 copies bundle, G7 or our future? Shame on MM, Educated but not learned! His is open display of kindergarten wisdom. Le him have his 5 mins of fame doing errant for the wicked. But take it from me, he will live to regret this in the long term.

Mr Ochola, your remarks are not only disrespectful, childish and daft, but they epitomize the sycophantic myopia of a typical fanatic, blind and listless. If it was not for the great sacrifices of people like Onyango Oloo and Miguna Miguna, Kenya would continue being a cesspool of corruption and mediocrity, not a country of hope and promise, and it is principled people like the above this country needs to reign in and call out the indiscipline, thievery, primitivity and fathomless idiocy of our politicians. Yes, Raila included! If Raila drops dead tomorrow, will the world come to an end? Grow up. Miguna is not the problem for Raila, it is Raila's own dishonesty and fakery quackery as a 'leader' that is the problem.

Miguna Miguna did not do any thing to liberate Kenya he ran away to greener pastures while the real men like Raila Odinga stayed at home to fight for Kenyans. It's well know that these two folks are being used by PNU/ Uhuru money machine. This will not stop true Kenyans to fight for their country.

Are you saying that miguna ran away,but forgot that raila also fled to norway dressed up in his wife's clothing,or you would rather pretend not to know that part of our history.In fact,let me remind you that raila was only detained by moi for participating in the failed coup of 1982.I guess people confuse raila for his dad mzee jaramogi,the doyen of opposition.
Raila was not in the mix of our 2nd liberation,i was there and i know.Orengo,shikhuku,matiba,rubia,shamala,wangari,imanyara,kivutha,njoya to name but a few should be accreditted with 2nd liberation.

Folks, thanks for your comments. Let us try to keep it civil. I am tired of stating for the umpteenth time that I am NOT GEORGE Onyango Oloo of TNA! My pic and small profile is right here on the blog. Do I look like George? Does he have my political profile?

I applaud each of you for the good work done. Its rare to find an African writer having such a successful launch.( which is evident by the sales) This encourages writers and readers at the same time. I would like to get a signed copy especially since the author has thought out of the box and done something new.

fantastic post and Thanks for sharing this info. It's very helpful.
B&B in Jaipur

The migunas of tis country should continue questioning and demanding accountability from our leaders... most of the comments going around are based on guys who have not read the book. Let read the book and understand it's not about raila.... it's an opportunity for rail a to take a good look on himself and see why he needs to drop and improve as a presidential candidate...

Anonymous said...
This comment has been removed by a blog administrator.
2:17 PM