On February 28, 2008 I was flying into Kenya from Manzini, Swaziland where I had participated in a public forum the previous day at that city’s George Tum's Hotel. I had been invited by the Swaziland Coalition of Concerned Civic Organizations (SCCCO) to speak to our Swazi sisters and brothers about the tense, violent situation back at home. Manzini had been the last stop of a weeklong whistle stop Southern speaking tour which had taken me to Johannesburg, Cape Town and Durban.

Now, as I zoomed by taxi into Nairobi from the Jomo Kenyatta International Airport via Mombasa Road, I fretfully placed a call to a long time Canadian acquaintance who was working as a correspondent with the Voice of America in the Kenyan capital.

“There’s been a breakthrough! Kibaki, Raila and Annan are meeting! They are signing a peace agreement! The violence is over!” 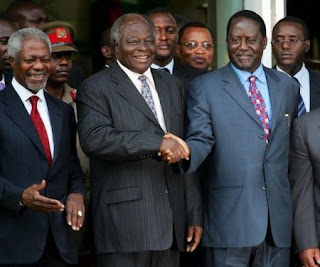 Was her excited response when I asked for an update on the post election crisis.

Three years later what do we see in Kenya?

Vicious arm wrestling featuring the duo of dueling principals-one more unprincipled than the other. 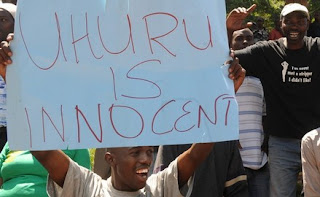 Some of the alleged key architects of the 2007-08 post-election carnage are determined to set the stage for another round of inter-community strife come the next electoral contest, as they desperately attempt to stave off their imminent plane trips to a Dutch city that has become synonymous with hell on earth for brutal war criminals, sadistic mass rapists, unrepentant ethnic cleansers and shameless electoral day light brigands.

As I write these lines, 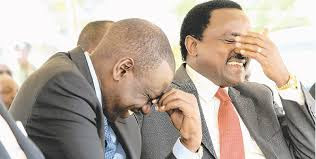 a certain foppish spineless politician with myopic, somewhat misguided presidential ambitions who prides himself on his putrid opportunism is preparing to hector at the United Nations lectern in an abject plea for the world body to rubber stamp a dead end policy of immunity that is now the modus operandi of a section of Kenya’s fractious ruling coalition determined to hang on to state power using Al Capone tactics.

Forgotten for the moment is that euphoric last Friday when a certain document was sanctioned as the supreme law of the Kenyan land at the tail end of August 2010.

By now it is obvious to any Kenyan above the age of two with a functioning brain in their cranium that the vulgar vultures and hideous hyenas from the blood curdling KANU dystopia of yesteryears are circling ominously, hoping to pounce on our new constitutional child to maul it to extinction even before it has had a chance to fill its puny infant lungs with copious gasps of grateful oxygen.

But can this cacophonous cabal of scheming putschists smell the whiff of anger and draft of resentment being blown to our shores by furious northerly winds? 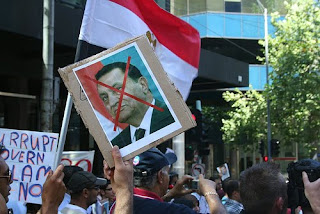 Do these greedy managers of our sprawling neo-colonial plantation feel the gnashing of teeth among the shamba boys and house girls?

Have they flipped through the yellowing newspaper archives to re-read what fate befell the unsung and unlamented Does, Bokassas and Mobutus?

Is there a possibility that Kenyans will start using Facebook for more useful functions-apart from announcing how bored they are; why their Premier League teams lost; where their weekend clandestine lovers disappeared to?

Is it possible that

volcanic eruptions, lake side rising tides and riverine floods of transformational fervor are about to over run the pig sty that was built over our home by hogs unperturbed by filth?

As the clock ticks, I close my eyes and see clearly a new Kenyan phoenix rising from the forty eight year old rubble of corruption, repression and contagion.

Posted by Kenya Democracy Project at 9:50 AM

I actually believed we would all work hard especially the politicians and with shame on their faces for leading our country almost to war in 2007. I will not say much... I will only welcome the day that I felt and wrote would one day be, the day when Kenyans realise it is a systemic rot that we are up against and that a moment to throw it out completely must come one day! I have seen a lot of collaboration on fb but and I know what the North has taught us... I now hope ...

Everyone is talking about Kenya going the North Africa. Don't think that is an informed view. Tunisia, Egypt and Libya are where Kenya was in 1990-92. For instance, Muamar = Moi where even publishing a critical caricature of the president could land you in serious trouble. Compare that with Kenya where drawing the head of state nude would not bother anybody.

The revolution taking place in North Africa can also happen in Sub Sahara Africa. We all experience injustices through bad governance by our leaders.

WELCOME TO THE GREAT BROTHERHOOD.
Do you want to be a member of Illuminati as a brotherhood that will make you rich and famous in the world and have power to control people in the high place in the worldwide .Are you a business man or woman,artist, political, musician, student, do you want to be rich, famous, powerful in life, join the Illuminati brotherhood cult today and get instant rich sum of. 2 million dollars in a week, and a free home. any where you choose to live in this world and also get 20,000,000 U.S dollars monthly as a salary %2026
BENEFITS GIVEN TO NEW MEMBERS WHO JOIN ILLUMINATI.
1. A Cash Reward of USD $800,000 USD
2. A New Sleek Dream CAR valued at USD $500,000 USD
3.A Dream House bought in the country of your own choice
4. One Month holiday (fully paid) to your dream tourist destination.
5.One year Golf Membership package
6.A V.I.P treatment in all Airports in the World 7.A total Lifestyle change 8.Access to Bohemian Grove
9.Monthly payment of $2500,000,000 USD into your bank account every month as a member
10.One Month booked Appointment with Top 5 world Leaders and Top 5 Celebrities in the World.
If you are interested of joining us in the great brotherhood illuminati satanic hand symbol contact us now with this number or whatsapp me (+2348083325148 }OR Email- Illuminatimoney66@gmail.com