Rekndling the Prospects for a New National Democratic Constitution in Kenya

A Digital Essay from Onyango Oloo in Brazil

Like most of my compatriots, I have been following the meandering shenanigans of the Parliament's Select Committee on the constitutional review process with mounting despair and seeping cynicism.

Having watched, for almost twenty years now, the half-hearted measures by the Kenyan political elite to cobble a version of a national constitution that moves away from the current awful one, I will be a hypocrite if I said that I am disappointed or even surprised at the ongoing impasse and the seeming somersaults on party positions among the grand coalition partners in ODM and PNU.

Adongo Ogony, one of my close friends and veteran comrades, from his base in Toronto, Canada, penned something just a few hours ago expressing his red hot ire, not at PNU but ODM, a party that he has been quite supportive of. He is not the only one who appears to be quite livid at the attitude of certain sections of Kenya's largest party who on the surface at least could be accused of selling out their very constituents and mass base.

I prefer to take a more sanguine view, tempered by an ideological analysis predicated on the balance of forces clamouring to control the Kenyan state.

In the first place, we must contextualize the constitutional review process against the backdrop of a much larger, and much longer protracted struggle for national independence, democracy, equality and social justice.

From this perspective, the kind of constitution a given country comes up with is diretly connected with the role, ideological clarity and popular strength of the democratic forces fighting for change.

To give two African examples.

Rwanda today is lauded for her constitution and her institutions- with the poignant pointer that this small land locked eastern/central African country boasts the highest number of elected FEMALE MPs in Africa. It has outlawed manifestations of tribalism and xenophobia and seems to be on track in tackling grand graft.

Yet this did not just happen.

There was first the brutal, vicious and violent pogrom which left almost one million Rwandan women, men and children slaughtered after barely three months of a state-supported militia campaign of carnage based on ethnic hatred.

spearheaded by General Paul Kagame transformed itself from a guerrilla army into a political movement that eventually wrested control of the state and begun implementing its minimum programme of action.

That programme of action included carrying out campaigns to improve the inter and intra-ethnic interactions; normalizing relations with neighbouring countries; flushing out thousands of suspected genocide perpetrators; jump- starting the battered economy and very importantly putting in place a new democratic constitution which in turn led to new multi-party elections and other reforms.

Further down south, the Tripartite Alliance led by the African National Congress and co-anchored by the South African Communist Party and Confederation of South African Trade Unions wrestled the weakened apartheid monster to the ground and 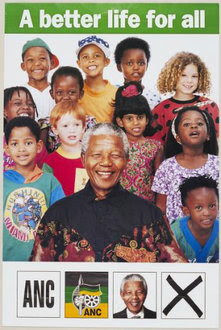 The elections in turn could not have taken place had the South Africans not gone through a very comprehensive, consultative and thorough national consitutional making process which led to the promulgamation of one of the most comprehensive constituion in the whole world.

In other words, it IS NOT AN ACCIDENT that the South African and Rwandan constitutions are progressive, democratic and viable.

It is because they come out of a national process of resistance and struggle and therefore were fueled by the sweat, tears and blood of contingents of patriots past and present.

What do we have in Kenya at the moment?

A caricature of Rwanda and a burlesque of South Africa.

In 2002, flying high and euphoric on the wings of the Unbwogable Spirit, Kenyans rose up to defeat the 39 year old dictatorship of KANU, first led by Kenyatta and then by Moi.

While applauded ourselves heartily for this dramatic shift in our national politics, we remained in the hazy den of convenient political amnesia by electing with a landslide, Moi's loyal and long serving deputy Mwai Kibaki who had once quipped that removing KANU from power was a gargantuan task, akin to cutting down the sturdy fig tree armed only with a rusty razor blade.

Our disappointment in 2004 when Kiraitu Murungi and Martha Karua led the pro-Kibaki walk out at the conclusion of the national constitutional conference at the Bomas of Kenya was therefore willful self-deceit and self-delusion because we should have known that Kibaki and his cronies (including the "reformers" of yesteryear) were instrinctly part and parcel of the KANU ancien regme in terms of temperment, ideological grounding and class background.

Our disappointment in 2010 is once again a schizophrenic freak out because we ought to know that the Grand Coalition Government is a monstrous outrage against our national democratic consensus which in 2007 gave the political mandate of governance to Raila Odinga as President-Elect and ODM as the incoming ruling party.

Thanks to Mwai Kibaki's December 30th Civilian Coup and the ensuing state terrorism and widespread civilian violence that followed, the Western powers, through their hand-picked Headman/Likuru Kofi Annan cobbled together a political settlement aimed more at soothing the concerns of the Western powers about geo-political stability in Kenya to safeguard their interests rather than a need to deal with the pressing challenges of Kenyans and their democratic aspirations.

Why should we be surprised that the pro-Kibaki cabal would want to fight with every ounce in their bodies against a genuine national constitutional transformation?

Why should we be shocked to find ODM working hard to protect their positions within the Kenyan state?

At the moment, we are NOT dealing with any deep democratic transformations in our country.

We are spectators cheering on PNU and ODM as they fight for dominance over who will manage the corrupt Kenyan neo-colonial state on behalf of imperialism.

In fact, we only have ourselves to blame because we have CEDED control over the constitutional review process by remaining largely UNORGANIZED and DISORGANIZED outside parliament, outside the executive, outside the judiciary and outside the state in determining the pace, the content and the timing of a new national democratic constitution.

As the late Trinidadian born Pan-Africanist revolutionary, Kwame Toure aka Stokely Carmichael used to exhort some of us in North York, Ontario, when he came over for those memorable African Liberation Month lectures in Canada those many years ago:

We need to remember our traditions of militant democratic national struggles- overt and covert; above ground and clandestine; inside the country and in the spaces of the scattered diasporic Kenyan communities around the world; among women as well as men; by the youth and also the grey haired senior citizens; across a multiplicity of ethnicities; transcending party affiliations and regional idiosyncracies.

Nice, accurate and to the point. Not everyone can provide information with proper flow. Good post. I am going to save the URL and will definitely visit again. Keep it up.
Dissertation Help | Custom Dissertation

I also get lot of information from the article.

I never read whole articles but the way you wrote this information is simply amazing and this kept my interest in reading and I enjoyed it.

That is a great article, i really loved reading the information on this site.
Buy Essays Online

Nice information. I have added this post to my blog. Hope you will post these kind of informative post more so we all can take benefit from these information...

I have found this article very exciting. Do you have any others on this topic? I am also sending it to my friend to enjoy your writing style. Thanks
Online Shopping in Pakistan

Great Blog! Very informative, I appreciate all the information that you just shared with me very much and I also bookmarked this on dig too. Take care and I'll be back to read more in the future.

Hi, thank you for sharing this great info. Was just browsing through the net in my office and happened upon your blog. It is really very well written and quit comprehensive in explaining with a very simple language.

I am very happy to find this blog. Thanks for creating the page! I am positive that it will be very popular. It has good and valuable content which is very rare these days. Custom Essays

When I pointed your site , I found a lots of information about your religion.thanks for making this blog. Coupon Missy
Grocery Coupons

Thanks for your excellent posting. I really enjoyed reading this blog.

Great work by the blogger this blog really help me.


I wanted to thank you for this great read!! I definitely enjoyed every little bit of it
Airport Taxi

Great work by the blogger this blog really help me. Have a good day! Thanks for sharing.
SEO Company

I found many interesting things from this site. It helps me many way.