A Tribute by Onyango Oloo in Nairobi

It must be a long time since Kenya’s largest airport witnessed such a phenomenon. 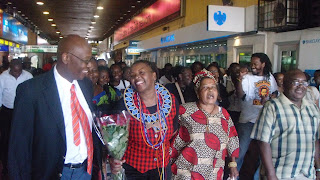 at the arrivals lounge the other day, singing and dancing for her emergence from customs and immigration.

Our celebratory chants and stomping, with our militant fists pumping the air may have startled one or two people waiting to welcome back their loved ones. 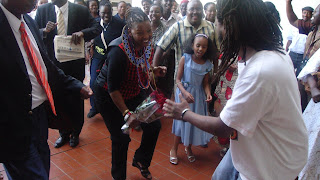 This Thursday evening in mid November was a special one for all of us who have known and interacted with her all these years-some of us going back thirty years or so.

I am talking about Njeri Kabeberi- political sister and comrade to many of us; leading figure in Kenya’s democratic and human rights community; commentator among the many hats she wears.

On hand were folks like members of the Five Centuries Theatre Group; spoken word/poet-activist Ndungi Githuku; the Secretariat and Board Members of CMD-Kenya; women from a myriad Kenyan nationalities and cultural backgrounds; Njeri’s mother and siblings; friends and associates, not forgetting crews from K24, NTV, KTN, Standard, Nation and other branches of the local and international print and electronic media.

Njeri was coming back to Kenya from a whirlwind trip that saw her going to Germany, Netherlands and Australia.


The highlight was Germany where 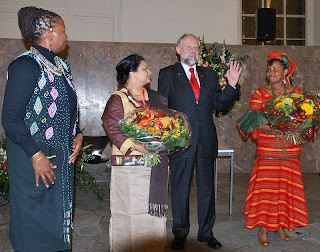 she was feted by the Chamber of Lawyers in Frankfurt am Main who conferred the Inaugural Prize for Outstanding Commitment to Law and Justice.

In their August 24th invitation letter to the ceremony, the Frankfurt lawyers informed Njeri:

The Chamber of Lawyers Frankfurt am Main has resolved to award to you the aforementioned prize as part of the conference “The Influence of World Religions on the Legal Systems of the Countries” to be held from October 29th to October 31st 2009. Hence, we cordially invite you as the winner to the awards ceremony which will be celebrated on October 29th 2009 at St Paul’s Church in Frankfurt am Main. The Chamber of Lawyers Frankfurt am Main wishes to honour you for the many years of work fighting for justice, democracy and human rights in disregard of the private and professional drawbacks and threats. The award has an endowment of EUR 5,000. We are also looking forward to welcome you as our guest to all conference sessions and events here in Frankfurt. Travel costs and accommodation will be absorbed by the Chamber of Lawyers. I trust that this official invitation letter will be accepted by the authorities when applying for possibly required entry and exit visa. Mr. Friesch has already informed you about some organisational details. Please do not hesitate to contact us if you require any further assistance. Please find attached the current programme with further details on the conference. Sincerely yours, Prof. Dr. jur. utr. Dr. phil. Dr. theol. Lutz Simon President

As Njeri herself pointed out in her acceptance speech which you can access at this link, this award was not just for her but for all those courageous and patriotic Kenyan women and men who have sacrificed life and limb to make this beautiful country a better place by agitating for human rights, democracy and social justice.

On a more personal note, I was quite moved by this recognition of Njeri.

I first encountered Njeri’s passionate patriotism and commitment to justice when we were both still in our early twenties, eons ago.

At the time I was a young university student on trial and Njeri formed part of a very small band of very courageous human rights defenders who made a point of showing up in court at a time when the Moi-KANU one party dictatorship had terrified the entire populace into near total submission.

Later on, when we were incarcerated, Njeri and her comrades (mostly women, I should add, for the historical record) kept our spirits going through visits; helping us to smuggle clandestine prison letters to Amnesty International, Lawyers for Human Rights, Nelson Mandela and other comrades outside the country; supplied us with novels, poems and other progressive literature; kept us in touch with our families; coordinated our legal battles and most importantly provided a vital link between those of us behind bars and the fledgling underground national democratic movement.

All these years while I was behind bars, I had never met Njeri in person, but from all the anecdotes, I assumed that she was somebody much older than I, probably my auntie’s age.

Imagine my surprise, sometime in June 1987 when I walked into her then quite modest offices on the third floor of Continental House off Uhuru Highway. It was not a government owned building back then.

When I was ushered into her office I saw a striking young woman, not much older than myself.

I promptly asked her if I could see Njeri Kabeberi.


We hit it off as comrades and friends instantly and we have maintained close political and professional contacts ever since.

People may know the public Njeri-feisty, indefatigable, committed and militant.


I know that Njeri too.


But I also know Njeri the ever generous friend; Njeri with her ever present sense of humour; Njeri the voracious reader; Njeri the music lover and sports aficionado; Njeri the devoted daughter and loving mother.


Njeri Kabeberi is one of the finest representives of our generation of Kenyan activists of the late seventies, eighties and nineties seeping into today and tomorrow-the generation which is gently tip toeing into its middle age having spent more than half of our lives on the trenches of democratic struggle inside and outside the country; in front of and behind bars; above ground and clandestine.

The awards Njeri received in Frankfurt and 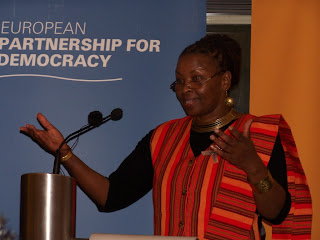 later on at the Hague are A BIG DEAL.

Her tour of Australia at the invitation of Frontline, an international network of human rights defenders means a lot to me personally.

It is indeed a Very Big Deal because so many of our unsung comrades have gone to their graves without a public acknowledgment of their contributions.

I can cite people like Patrick Onyango Sumba who was buried recently-buried with him was the history of his valiant contributions as a founder member of the Organization for Democracy in Kenya (ODK), one of the earliest exile based movements which was very active in the Scandinavian countries from the early 1980s to the late 1990s confronting the repressive excesses of the Moi-KANU dictatorship.

I can mention people like Mrs. Priscilla Abwao who died on Tuesday, November 17, 2009- the very day that the Committee of Experts unleashed the new harmonized draft constitution. I was glad that Ms. Atsango Chesoni, the Vice-Chair of that Committee in her remarks, made a point of paying tribute to Mrs. Abwao, the only Kenyan woman in the Lancaster House Conferences which helped to usher in Kenyan independence. Unbeknown to Atsango, one of our founding mothers of modern Kenya was no longer with us. It was Prime Minister Raila Odinga who revealed to a stunned nation that Mrs. Abwao had died earlier that day and requested a minute of silence in her honour.

I can talk of people like Mwakdua wa Mwachofi, a militant student leader from Wundanyi who died in American exile in 1994.

Because I respect their privacy, I can not reveal the names of two revolutionary veteran Kenyan sisters-one living and working in North Africa and the other one residing in North America who gave so much of themselves to the struggle for a better Kenya that they paid a heavy price with their very health-they have both been battling cancer for almost two decades now, all but forgotten not just by the general public, but even more sadly, by their more high profile male comrades, some of whom do not even bother to lift up a telephone to find out how their political sisters are doing-because these comrades know in detail the health travails of these sisters I am talking about.

When Njeri is honoured, it is a direct tribute also to the contributions of the late Onyango Sumba, the late Mrs. Abwao, the late Mwakdua wa Mwachofi, the nearly forgotten revolutionary sisters, veterans of the Mau Mau generation and beyond; it is a kumbu kumbu for Makhan Singh and Muindi Mbingu; Pio Gama Pinto and Me Katilili; Mary Nyanjiru and Elijah Masinde; Syo Tuna and Koitalel arap Samoei.

A few years ago, a twenty something Bongo artist from Dar es Salaam, Tanzania, was lamenting in a popular tune that there is a tendency to sing the praises of people only after they have died; he demanded to be praised while he was still alive.

To this extent, I feel that celebrating the ongoing achievements of our Njeri Kabeberis is very important when we are all still living and breathing; struggling and fighting for democracy, peace, national harmony and social justice in our communities, countries, regions and in the world.

Are we not ashamed as Kenyans that it took a group of Frankfurt-based German lawyers and a network of democrats in the Netherlands and human rights defenders in Australia to remind Kenyans that the contributions of the Njeri Kabeberis in our midst have helped to change this country? 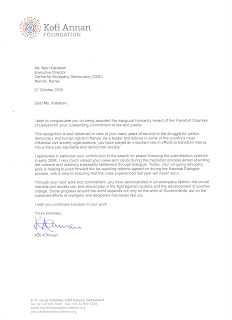 Where is the note of congratulations from either of the two principals at the helm of Grand Coalition Government or even the leaders of the political parties whose activities she helps to support through the contributions of the Centre for Multi-Party Democracy in Kenya?

The total absence of Kenya's diplomatic representatives in Germany at the ceremony- despite getting an official invitation to the event-speaks volumes about the priorities of the Kenyan government when it comes to human rights and social justice issues.

More immediately, what have WE, her political comrades in the human rights organizations and other civil society bodies done to recognize her achievements?

We must all criticize ourselves severely for taking each other for granted as comrades.

Why must we wait for a Bantu Mwaura to die before we organize a night in their honour?

I am saying this while pointing four fingers at myself first and foremost.

Having said all that, I can only end by saying that one of the best ways of acknowledging the contributions of comrades past, present and future is to redouble our efforts in building lasting organizations and networks with concrete and practical strategies of lifting our country Kenya from its current quagmire.

In other words, mapambano continua until we achieve a lasting victory!

Dear Oloo
I confess some of us, the generation behind you and those who didn't go to Higher Education but left Kenya after the droughts of the 70's seeking good fortune abroad, know little of you mwakenyas or Njeri's of our Kenya. In that case i thank you for teaching us about you and your causes. We are catching up Brother.

Hey thanks for posting my blogg

Indeed.. it's amazing that Kenya seems to not care about it's image. You would think they would at least send ONE diplomat! It point's to the fact that the people who seem to really represent Kenya don't sit in parliament anymore.