Victory for Mombasa Men in a Nairobi Court... 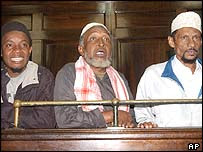 Salmin Mohammed Khamis (L), Said Saggar Ahmed (C) and Mohammed Kubwa Seif-charged with conspiracy in a 2002 suicide bombing of an Israeli-owned hotel on the Kenyan coast-stand in the dock inside a packed court in Nairobi, Kenya June 27, 2005. A Kenyan magistrate acquitted the three men on Monday of conspiracy in a 2002 suicide bombing claimed by al Qaeda that killed 15 people at an Israeli owned hotel. Photo by Thomas Mukoya/Reuters


By the way, if you are watching television right now, 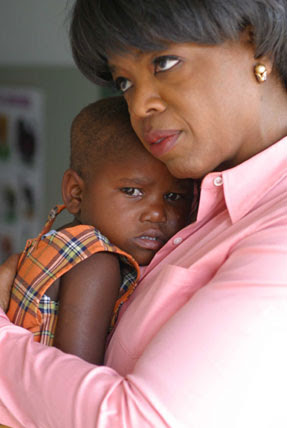 Oprah Winfrey is getting her ears pierced in front of a global audience.

Stay tuned to find out!

Meanwhile,three Mombasa residents are grabbing news headlines around the world as I write these lines(4:09pm EST, Monday, June 27, 2005).

Aggrey Muchelule may well turn out to be the BEST Chief Magistrate Kenya has had since 1963 because of his balanced, independent and courageous decisions. Remember he was the one who acquitted David Makali and John Chemweno; he is the one who sent Ketan Somaia to jail; he is the one who had Foreign Minister Ali Mwakwere huffing and panting as he sprinted to court not too long ago.

Alternatively, maybe the Kenyan judiciary is just reasserting its own clout- a welcome breather from the heavy-handed bureaucratic bungling of the executive and the sleazy tumbo-first attitude of the legislature.

Or perhaps, there is a reason to smile when it comes to an emergent human rights culture in which democratic minded lawyers, magistrates and other sections of civil society seem to be engaged in their own low profile fight-back to ensure that the Unbwogable Spirit is entrenched in the judicial system- despite the Cholmondeley and Lucy Muthoni fiascos. I I mean it was just the other day when another judge declared that the DPP has NO BUSINESS or powers withdrawing cases from court.

Anyways, before I dash completely off-tangent, let us get back on the case shall we?

Here is how Aljazeera is covering today’s verdict.

And this is how the Jerusalem Post is reporting the same story.

The London Guardian has posted this dispatch on their website.

And that rabid, far right rag,The Washington Times based in the US capital relies on a UPI feed to inform its readers about the breaking story.

this earlier story from Aljazeera when High Court John Osiemo released 4 other suspects in the same case.

But just before we start hyperventilating, let us simmer down with this reality check- a recent story of 4 people being nabbed in Garissa for the "crime" of "filming a US-built school."

At around the time of the Kikambala bombing in late 2002, this is what I had to say about the tragedy in this opinion piece I posted at the Mashada forum on Thursday, December 5, 2002 at 2:15 am.

Conspiracy theories aside, and fast forwarding to 2005, I want to suggest that today's acquittals could also be a further indicator that the NARC government is struggling to wriggle and wiggle out of the strangle-hold of Uncle Sam when it comes to asserting Kenyan national sovereignty. We should give credit where it is due and so, without any riders, provisos, ifs, buts or any other caveats, I would like to commend the current trend in standing up against George Bush and the United States of America. I mean, which Kenyan(apart from our familiar National Review quoting house niggas lurking over at rcbowen.com) is not PROUD of the Kenya government decision NOT to give a break to potential American war criminals arraigned before the International Criminal Court? Kudos to Paul Muite and other Kenyan MPs for denouncing the arm-twisting from Washington.

"First of all, America is being utterly immoral in refusing to sign up [to] the International Criminal Court and to go further and require economically weak countries like Kenya, blackmail them, is really very, very insulting to our sovereignty, to our sense of self-respect.So we are taking the position that that military aid should be suspended - we don't want it."

At times like this, I declare an unconditional truce with the Kibaki regime- until the crack of dawn tomorrow morning.

And speaking of the World Court, Kenya and the United States, this is what I said on the subject almost exactly TWO YEARS AGO over at Kisii.Com.

We are not out of the woods yet.

Railing against Uncle Sam on single issue like the International Criminal Court hardly makes sense if our government keeps falling down on bended knee, cap in hand, begging for bilateral alms.

We cannot have an independent foreign policy as long as we have a dependent neo-colonial economy that relies on infusions from the so called donor countries( there are more like anopheles blood suckers to me) to shore up our internal infrastructures and other sectors of the economy.

As we Marxists say, ideological superstructures like foreign policy flow from the economic substructures at the end of the day.

Well, some other day.

Right now, I am looking at my watch and I must make sure that I do not miss an evening meal at a Nepalese restaurant with one of my very good friends in this city of Toronto.

And for those smutty minded, gossipy voyeurs who are wondering- she is a PLATONIC friend, ok?

And I have an acronym for said smutty gossips:

MIND YOUR OWN BUSINESS!