By Kathure Kebaara
As a proud Kenyan feminist, I am astounded by the attitudes and ignorance coming from Kenyan parliamentarians and groups such as the Kenyan chapter of The Federation of Women Lawyers (FIDA) on the issue of sexualised violence and what Kenyans should do about it.

Rape and other forms of sexualised violence are just that-violence.

Sexualized violence is the birth child of patriarchy and misogyny but that is always interlocked with other forms of violence in society such as the violence of condemning millions of people to extreme poverty.

Who in the world does not know that with an increase in poverty as has been the case in Kenya since the mid 1970s comes an increase in all sorts of violence, of which rape and other forms of sexualised violence are one manifestation?

Who does not know that with poverty comes an increase in male violence against women and children on the domestic front?

How are women to leave abusive relationships when they have no resources to survive?

Arethose that are calling for an increase in violence in Kenya by advocating for castration, death and life sentences aware that many, many, many men coerce and rape their wives and girlfriends all the time?

"Nice", every day men, engage in this behaviour and do not even see it as an affront on women's rights. Men have such a sense of entitlement when it comes to women and our bodies that they believe that they have a right to sexual services whenever they please. I bet you, that almost all Kenyan men have engaged in this behaviour. I bet you that most Kenyan men have also accessed the services of prostitutes. Do you think that prostitutes sleep with strangers because they enjoy doing so, or because poverty forces them to do so? Is it by choice that these women sell their bodies to be violated by men or is it because of the violence of poverty? What is really going on in men's psyches when they exploit women and young girls in these ways? In their hearts and minds, how do men see women?

That is of course if they see us at all!

This is an example of why feminists know that woman hating (misogyny) by many, many, many men, even those who think that they have transcend misogyny, is alive and kicking.

What was going on for Kiraitu Murungi when he recently made those outrageous comments claiming that women are only too willing to be raped. That is a Freudian slip if there ever was one. People demonized him when he made those comments, but really how many men actually think the same way? One just has to look at the sorts of conversations that men have about women.

Get a grip people!

Where will you draw the line?

I bet you that it is not illegal for a man to rape his wife in Kenya. Will husbands who rape their wives be held accountable in the same ways? Or do you believe that a woman gives up her right to determine when and with whom she will engage sexually because she is within the context of a matrimonial relationship sanctioned by a patriarchal state?

In the Kenyan patriarchal state, men can have more than one wife legally. They can take advantage of women who are forced to sell their bodies for survival. Although buying prostitution services is illegal in Kenya, it is only prostitutes and poor Johns who are sanctioned by the state. Most people especially men, think that it is cute for men to exploit prostitutes, nothing too serious, just "boys being boys".

Sexualized violence takes place within a continuum of other forms of violence directed at women by men.

What of the mutilation of women's genitals, lest we enjoy our sexuality to the fullest which seems to be such a threat to men?

Is having your genitals severed worse than being raped?

I know it is women that carry out mutilations, but you know what, this is exactly how hegemony works-get the victims to do your dirty work. Get poor people killing each other left right and centre and sit there and talk about how you are appalled by the violence. It is not the case that women are naturally better people than men, but it is the case that patriarchal power positions men to control and abuse women. Just like blacks are not better people than whites, but white hegemony has ensured that whites have power and privilege over people of colour the world over.

Those people calling for castration,life sentences and the death penalty for perpetrators of sexualised violence are the same folks who are responsible for implementing polices that have led to unspeakable poverty for Kenyans.

Aren't those who claim to care for women so much horrified by the suffering that they see around them daily?

If they could stop sexualized violence, would Kenyans stop sufferingin the other ways that they are?

What other changes will there be for the starving Kenyans living in slums and rural areas all around that county?

What dothey think that people do with the rage thatis within them from the distorted lives of poverty that they are born and die into?

In patriarchal hierarchies women are frustrated men's punching bags. Patriarchal power and privilege are constructed around the notion of superior man and inferior woman. Just like racism is about white people's so called superiority and people of colour's so called inferiority.

For me there isno serious conversation thatcan be had about violence against women and children without looking at the ways that these larger contexts are implicated.

Is an individual man raping women and children any worse than those elite men and
women that implement neocolonial polices that cause so much suffering, confusion and
indeed a rise in all sorts of violence in the country?

When the country's elites are not busy implementing IMF and World Bank polices to the detriment of Kenyans, they are busy stealing any money that they can. Money that can actually make a difference in the lives of women and children that they purport to support.

Who are these women at The Federation of Women Lawyers(FIDA) who are so eager to entrench violence further into Kenyan society in the name of women and children?

FIDA Chairperson Nancy Baraza is quoted in The Standard of April 29, 2005 as follows:

"It's a step forward and reflects that a thriving nation is based on principles of social justice, equal opportunities and full enjoyment of human rights, freedom and security."

What is Ms. Baraza talking about?

Does she think that implementing the sorts of sanctions that she is espousing will give rise to these ideals that every working class and poor Kenyan dreams of?

What thriving nation is she speaking of?

Maybe the one that allows people like her to hijack women's struggles for
equality to line their own pockets. If these sorts of people are the cream of the
crop of Kenyan progressives, then we are facing a bigger nightmare than Moi or
Kibaki and their lieutenants. Later in the same article Ms. Ndung'u decries the fact that Kenya has not ratified various human rights instruments and she includes the Rights of the Child. Does she mean the right to be born and die in slums or on the streets, or does she mean the right to die of starvation?

Yet another example of women who are a part of the elite and whose interests are most often diametrically opposed to those of the majority of women. Women like those female parliamentarians who only want to join the Boys' Club rather than destroy the damn club. Those women who call for Kibaki to appoint them to positions of power "as they are just as qualified as men." Yes, even elite women are subject to male sanctions, which is why they are marginalised even within these elite circles!

What Kenyans need and particularly Kenyan women need is not a few token women with class privilege given appointments where they can enrich themselves further. Kenyans need changes in the social-political-economic structures in the country. Changes that will ensure that women's, children's and men's lives are not replete with poverty and violence. The fact that 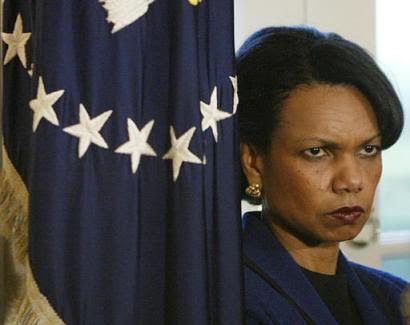 Condeleeza Rice of the U.S is an incredibly powerful woman in the Bush administration has no bearing on the lives of women, black or white. The fact that she is black means diddly squat for working class and poor black people in the U.S. Women are not a heterogeneous group and as such you can expect that sisters will sell other women down the river in a blink of an eye.

I bet you that many people expect that feminists such as myself are out for men's
blood? Not the case. I'll leave that for the likes of Ndung'u, Baraza and the bunch
of male parliamentarians calling for blood, and lets be clear that they only want
poor men's blood, not 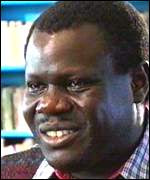 There are boys and men in our lives that we love and nurture. We want peace and justice and not a hoax like the one so called women's advocates like Ms. Ndung'u et al are proposing.

However I want Kenyans to be generous with the rich and powerful who have condemned them to lives of misery. Let them be castrated, lined up for firing squads,
imprisoned for life and so on. After all in reality they destroy more people than
the individual man who takes pleasure and power in terrorizing women.

Kathure Kebaara
Toronto
Posted by Kenya Democracy Project at 12:10 AM

Hi Kathure, this is a fantastic post. Thank you very much for taking the time to express this horrific issue in a manner that is easy for a lot of people to understand. I am with you 100% on the fact that we need to change our society and societal values period instead of running around enacting stupid bills. Take care.
Chebet Ng'ok