A May Day Digital Intervention from Onyango Oloo

"The whole world knows that Luis Posada Carriles, the most famous and cruel terrorist of the Western Hemisphere, entered the United States and is seeking asylum," said Comrade Fidel Castro, dressed in his customary military uniform and appearing in good health at 78. Posada, a CIA-trained explosives expert, is blamed by Havana for the 1976 bombing of a Cuban civilian airliner that killed all 73 passengers and crew aboard, and a wave of bomb blasts in Cuban hotels that killed an Italian tourist in 1998. The Posada case "reveals the empire's immense hypocrisy, lies, and singular cynicism," Comrade Castro said of the United States. 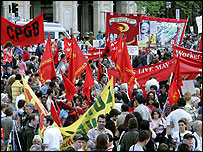 Millions and millions of workers and their supporters and allies attended a series of May Day rallies, protests, demonstrations and other events all over the world earlier today.

In Cuba, over 1,000,000 people showed up early to listen to President Fidel Castro affirm the vitality and resilience of the Cuban Revolution in the face of the machinations of a barrage of imperialist attacks led by the United States of America.

Across the Philippines, thousands of workers marched in protests denouncing the government and burning an effigy of President Gloria Aroyo.

in Taiwan,teachers marched to demand the right to form unions, peace activists criticized the U.S. wars in the Middle East and human rights demonstrators demanded that Japan revise their textbooks.

In Thailand, thousands of Thai workers and labor activists called on the government to raise the minimum wage and improve labor conditions at rallies in the capital Sunday marking May Day.

40,000 people showed up in the UK, while in Japan, 290,000 workers and their supporters held a May Day rally nationwide demanding a halt to growing momentum in the ruling coalition in Japan for a constitutional revision and calling for better livelihoods and the elimination of nuclear arms from the global community.

In Venezuela a major trade union initiative in solidarity with Venezuela has been launched by the Hands Off Venezuela campaign.

In South Korea thousands of workers celebrated the international day of solidarity for working people, with mostly traditional rallies and marches across the country. This year, the camaraderie among South Korea's two most powerful, yet rival, trade unions was unusually high. The Federation of Korean Trade Unions, the largest umbrella labor group in Korea with 940,000 members, marked the international labor day with a marathon run. About 2,000 workers participated in the event, which started at 10 a.m. in Yeouido, central Seoul. In the afternoon, about 25,000 workers affiliated with the Korean Confederation of Trade Unions, second largest with 620,000 members but the most militant labor group, held a rally in Gwanghwamun area, central Seoul. The two groups' presidents took part at each other's gathering, giving a solidarity speech for the first time and speaking with one voice against the government-driven irregular workers bills. Forming a united front against the bills, FKTU's Lee Yong-deuk and KCTU's Lee Soo-ho have been fasting together in a makeshift tent in front of the parliament buildings, central Seoul, since April 22. Today was the 10th day of their first-ever joint hunger strike.

In New Zealand employers were given a May Day message to stop passing the buck on workers' pay demands. Unions all over New Zealand are pushing for a five percent increase in wages.

Meanwhile, an article in the current issue of the New York-based Monthly Review Press details the shady history of the reactionary US trade union umbrella organization, AFL-CIO which has a long and sordid history as far as our country's trade unions are concerned, starting with the late Tom Mboya in undermining the militancy and political consciousness of the organized Kenyan working class movement.

So what happened in our own country? Our beloved Kenya?

Well, for starters, hundreds of thousands of Kenyan workers boycotted the official celebrations throughout the country a day after members of the

People Against Torture marched along Kenyatta Avenue, Nairobi, on their way to Uhuru Park to plant a tree. This article by Joyce Mulama gives a snap shot of the bleak past, present and future facing the country's textile workers.

Workers in Nakuru wanted NARC to show them the 500,000 jobs Kibaki and his crooked liars promised them while seducing wananchi to vote them to power in December 2002.

And in staying away from May Day celebrations in our country this year, Kenya's workers were dutifully fuataring the nyayos of none other than the First Worker, Mwai Kibaki who stayed away for the second year in a row.

Where was the First Worker? I have a strong hunch he was munching mukimo or kuon kal gi odhadho at his palatial residence in

Muthaiga with the First Lady and

Makhtar Diop's house the other day to remind them to keep the noise down, because after all, this was Muthaiga where the rich, the pampered and vainglorious mababi and mamwinyi, mabwenyenye and wabenzi reside in homes like the ones below, Kenya's First Worker was missing in action, who was on hand to pass the official government wool over the eyes of the wafanyakazi?

Why, none other than that rabid Ford-K/NAK attack dog called

Do you know what he said to millions of Kenyan workers today?

Well let me quote from the Daily Nation article appearing on Monday, May 2, 2005:

Future salary increases for the lowest paid workers will now be pegged on productivity. In a radical change from the traditional practice of announcing annual increments on Labour Day, Cabinet minister Newton Kulundu said it will now be done whenever production levels improved. The Labour minister announced this as he raised the minimum wage to Sh4,817.80. "(The review) will take place whenever considered necessary by the minister and dictated by the cost of living and productivity," he said during this year's Labour Day Celebrations at Uhuru Park. Workers in the agricultural sector – considered the least paid – will now earn Sh397 more than the previous Sh4,420, which represents a nine per cent increase. This brings the new minimum wage for such workers to an average Sh4,817...

mbuzi haraka haraka and slaughter it for the mheshimiwa waziri mara moja!

What a gift to the Kenyan working class from the Hon. Newton Kulundu!

Especially when you consider the actual record of the Kenyan parliamentarians.

Like I said the other day, commenting on all these wanasiasa jokers, TUMECHOKA!

Two days ago, I urged my fellow Wananchi to FORGET about all these mainstream parties and forge new political alliances from the ground up.

This time last year, I wrote and distributed a very lengthy digital essay on the condition of the working people of Kenya so I am in no mood to rehash anything today.

Let me end on a simple plea:

It is time for the working people of Kenya to have their own political party.

There are many models that we can learn from.

Since I happen to be a Kenyan COMMUNIST do not be startled when I direct you to the constitution of this familiar party in South Africa.

Onyango Oloo
Montreal
Posted by Kenya Democracy Project at 5:16 AM