The Second Trial of the So Called Lord...

The So Called "Lord" Delamare

Rough Sketch of a Future Play

A Work in Progress by Onyango Oloo

(This first draft written between 10:09 am and 11:34 am Eastern Standard Time, Saturday, May 21, 2005 in Montreal, Quebec in solidarity with the long standing struggles around land rights and other democratic and cultural campaigns of my Maasai and other Kenyan compatriots outraged at this neo-colonial racist atrocity...) 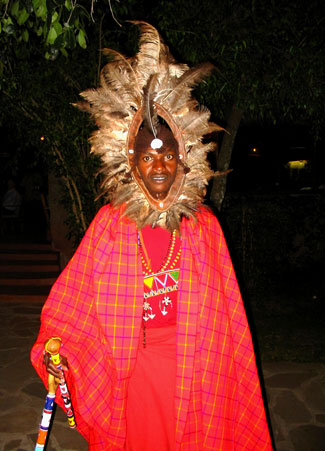 [Darkness. It is after midnight on LORD DELAMARE's Gilgil ranch. In the distance we see the lights illuminating the Kenyan billionaire’s mansion. Heavily armed African security guards patrol the property. Off stage, the rumble of thunder. Lightning flashes angrily on and off. Silence.Thunder. Howls of an approaching storm. Silence. The faint murmur of chanting voices. The pitter patter thud thud thud of dozens upon dozens and dozens of approaching feet. Suddenly a tenor solo leading an acapella rendition of a traditional Maasai song, a chorus of tenor, bass, bass baritone voices respond to the soloist with their own lilting and booming kiitikio and kibwagizo. The singing goes on for another two or three minutes, getting louder as the singers approach the stage. We can now see them: hundreds of Maasai women, men and children with spear wielding young morans at the front lines leaping up and down doing the famous Maasai dance routines as the crowd brandishes their clubs, swords, shields, spears, bows and arrows in unison and for emphasis. It is a colourful spectacle with various shades of crimson, burgundy and ochre shukas draping the loins of the advancing party who are bedecked in beautiful jewelry, bracelets, face paint and dyed hair. Panic in the distance as the security guards and their Alsatian hounds sense an invasion. Firimbis rent the air, following by robust rounds of gun fire. The advancing party with everyone holding aloft a burning mwenge marches on oblivious to the whizzing bullets, panic stampede and barking canines. Their singing and dancing get louder and angrier, louder and angrier as they loom closer and closer to Lord Delamare’s lair. Suddenly the front door of the mansion opens and out rushes out the Kenyan safari cowboy Thomas Cholmondeley sans eye glasses, unbuttoned pajama tops, crumpled pajama pants and mismatched hush puppies clutching his trusted .357 Luger Revolver looking for fresh KWS rangers to slaughter.

LORD DELAMARE: Iko wewe Fanya nini Katika private property yangu ninyi ghasia Maasai? We pana jua I am a very important man? Wewe taka mimi iko piga Sisina Mwingine risasi sasa hivi. Ondoka from my ranch mara moja ama mimi will be forced to take drastic steps! Ochieng! Kamau! Sapalan! Ruto! Hamisi! Mutiso! Wanjala! Abdi! Mosaisi! Mwangeka! What are you waiting for? I gave you the order to shoot these primitive savages the moment they entered the ranch! Go ahead! Shoot them! You know NOTHING is going to happen to you. We have very good friends in Nairobi as you saw the other day. Finish them!

PAUSE. NONE of the above named security guards make a move. They look defiantly at Lord Delamare. Finally, Kamau, the supervisor of the group moves closer to Lord Delamare. He points HIS gun at his employer.

KAMAU: Bwana Kubwa please put down your gun. You are under arrest!

LORD DELAMARE(shocked and confounded): What on earth are you talking about? Have you forgotten who pays your salary around here? Tell you what. You are fired!!!! Now hand over that weapon to me immediately you black monkey! Come on boy, I don't have all night. Ochieng, yes, from today you are the new supervisor.

OCHIENG: Sir, I do not think you understand what is going on.

[In the meantime, the singing and dancing, acrobatic leaps and brandishing of weapons continue. The crowd has now surrounded the mansion and has formed a semi-circle around Lord Delamare and his security guards.]

OCHIENG': Lord Delamare please surrender your gun right NOW or I may be forced to shoot YOU.


LORD DELAMARE: You too, Ochieng'??! I must say I am really disappointed. I thought you were a very promising young man with a bright future in front of you. What a shame! Well, we’ll see what happens. Ruto. You are now in charge. Forget about the little quarrel we had last year when I demoted you. Looking back I can see that Ochieng here gave me a lot of misleading slander about your work. Please do what you can to disperse these hooligans.


LORD DELAMARE: Abdi, Mosaisi, Hamisi, Mwangeka do something! You see why Kenyans have been suffering for forty years? It is these Kavirondos, Kiuks and Kales! It is time we the small tribes- and you know us wazungu are also an ethnic minority-it is time we came together and ended the domination of these Big Tribes.

The singing gets louder as the Maasai crowd closes in on Lord Delamare. Some are chanting “Ua! Ua! Ua! Maliza! Angamiza! Ua! Ua! In the distant rumbles of thunder. Suddenly all the lights in the mansion go off. The stage is now lit with hundreds of mwenges burning brightly and for the next five minutes the theatre is engulfed with the booming chorus of the crowd, their voices rising to a crescendo, accompanied with all the acrobatic leaps, brandishing of weapons and militant dancing. Suddenly an old woman makes her way slowly from the depths of the crowd to the front clutching a ciondo. She hobbles until she gets within five inches of Lord Delamare’s sweating and agitated face. She wipes Delamare’s face with a fly whisk. From her ciondo she takes out what appears to a handful of jivu (ash) and powdered makaa(charcoal) and sprays it over the forehead of the surprised billionaire. Now she takes out a gourd and using a pamba-tipped stick, she paints a pattern on Delamare’s face with what looks like fresh animal blood- to the ululations, whistling, cheers and clapping of the crowd. She abruptly leaves, disappearing back into the depths of the crowd. Eleven Maasai Moran armed with spears perform a war dance in front of the captive. A middle aged man dressed in traditional Maasai garb, but wearing designer glasses emerges with a lap top under his arm and a cell phone in his right palm.

He vigorously shakes the hands of Mwangeka, Mutiso, Ochieng, Ruto, Kamau, Abdi, Mosaisi, Sapalan and Wanjala. He hugs all of them in turn.


SISINA (in a Kenyan-North American “educated” accent): Thank you my Kenyan brothers. Thank you. This was a well-coordinated operation. I am now convinced that my uncle did not die in vain. Justice will seen to be done, this time not the Philip Murgor or Amos Wako way, but the Maasai way.

PAUSE. SISINA blows a firimbi and the security guards who stand in formation to present arms.

Vigelegele. Chanting. A very vigorous rendition of the dance we have been watching since the beginning of the scene.


LORD DELAMARE: Where are you people taking me? Wait! Wait! Ngoja! I think we can work something out! What do you want? Money? I have tons of it! Is it land? I can give you 60, 000 hectares right now! Where are you taking me? Wananchi! I am a Kenyan too! Tuelewane mabibi na mabwana! Mimi napenda ng'ombe ya kienyeji! Mimi iko na Mtoto Mbili Tatu wa Kimaasai! Hapana jua bibi yangu nyumba ndogo anatoka Kajiado! Please do not do anything to me! I beg you please do not cook me alive!

[The surging crowd ignores his pathetic yelps as they frog march him off stage. Gilgil ranch is on fire...]

End of ACT ONE.

To Be Continued….
Posted by Kenya Democracy Project at 9:09 PM

oh that was brill!!! You could have made him grovel more!!! His swa was very well written.