I  left the MP Shah Hospital approximately an hour ago. 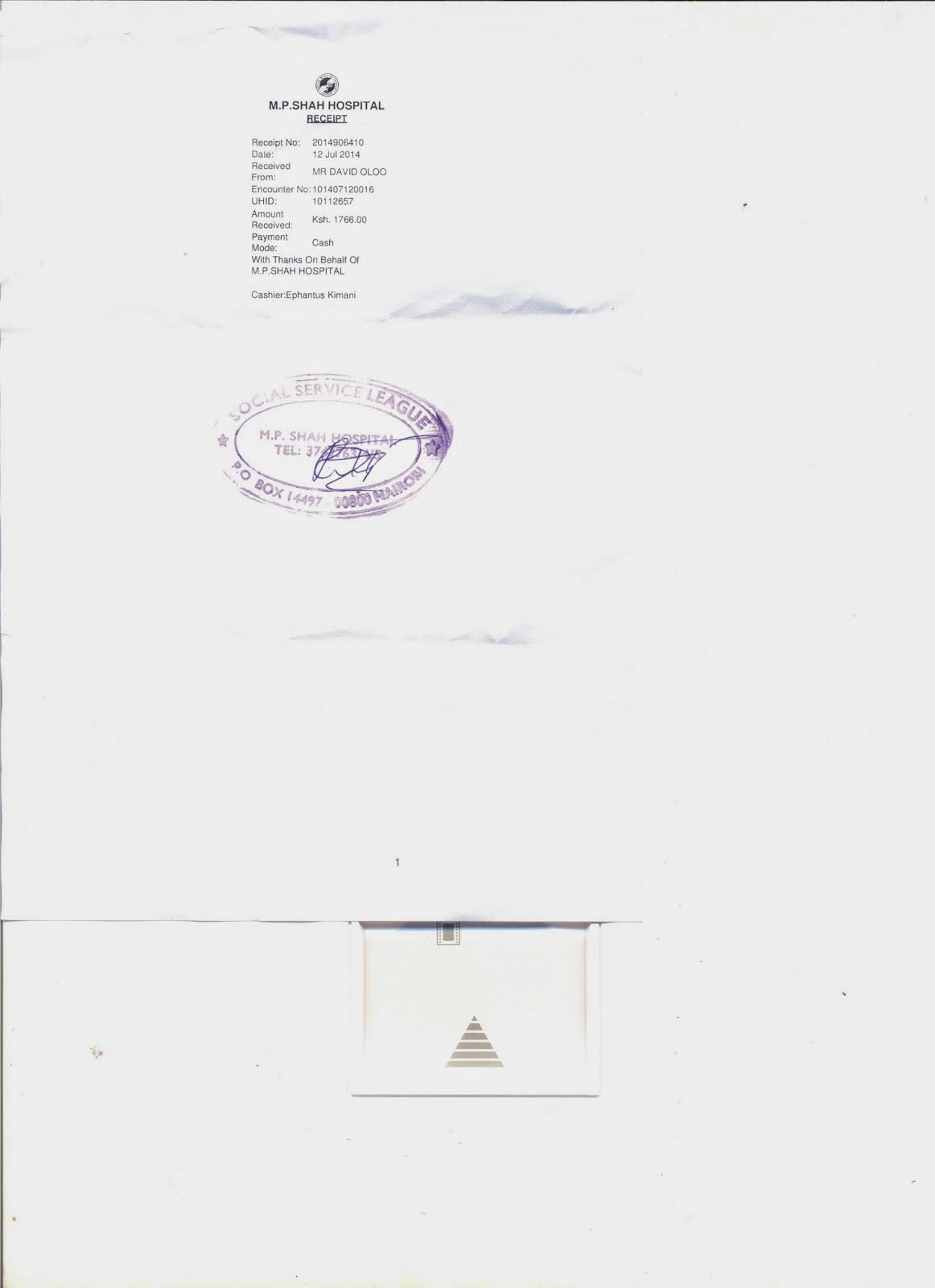 I was in the Casualty section of the hospital being treated for a fresh arrow wound from an assault inflicted by a horde of Maasai speaking militia wielding machetes, bows and arrows, iron bars, rungus and other crude weapons.

Our attackers are employees of the PCEA Church with an assignment to guard a controversial piece of public land in Kibarage on Peponi Road across from the Westgate Mall. 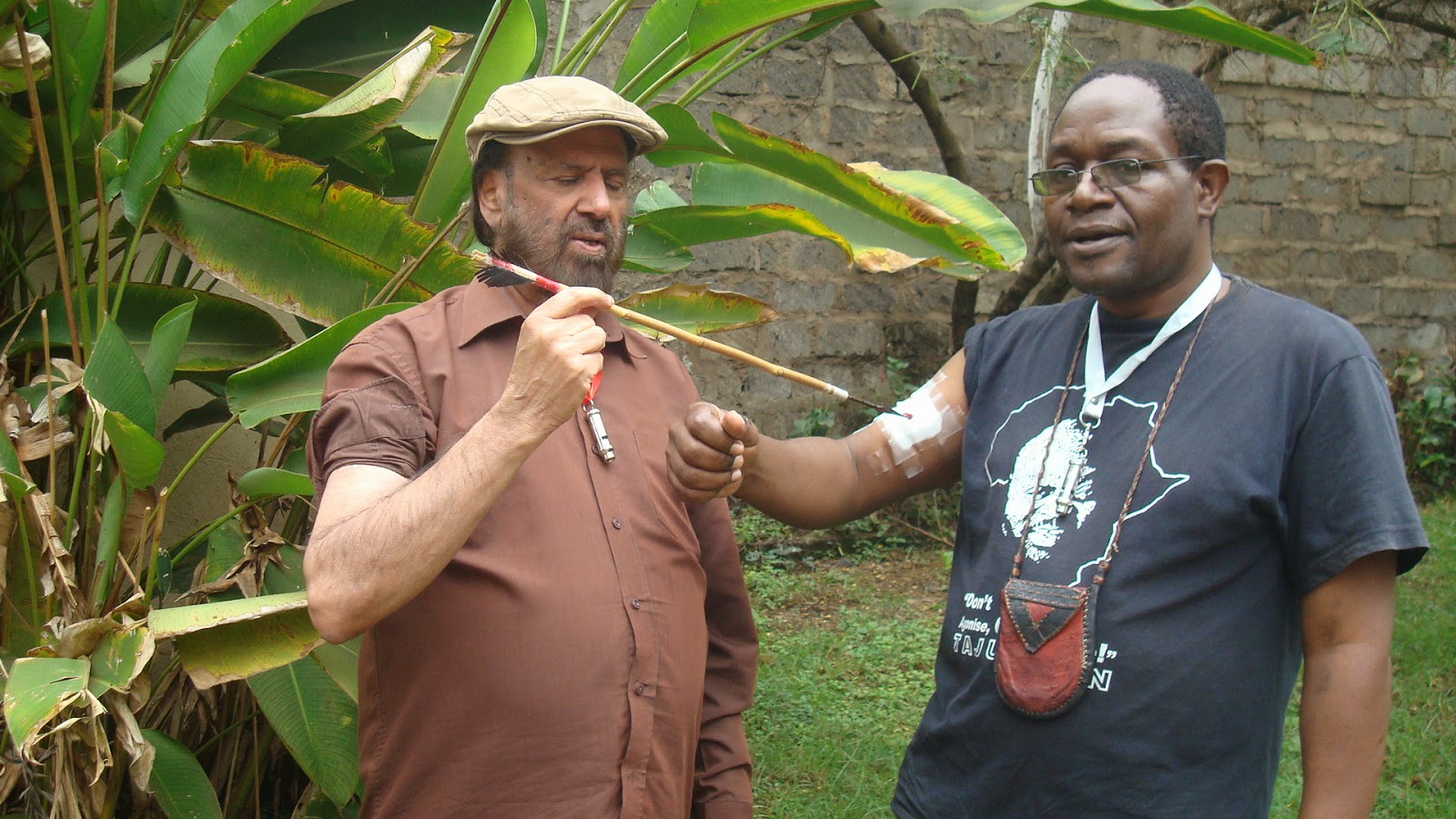 Davinder Lamba, the Executive Director of the Mazingira Institute, founder and leading light of the Operation Firimbi campaign against land grabbing and corruption, was set upon by the same vicious assailants who clobbered him on the back, shoulder and upper arm.

How did this all come to pass on a mid Saturday morning in an otherwise sedate middle class suburb of Nairobi?

On the evening of Friday, July 11, 2014, Davinder Lamba got a call from Henry Mudogo, an activist and trader in Westlands inviting him to a public meeting convened by area 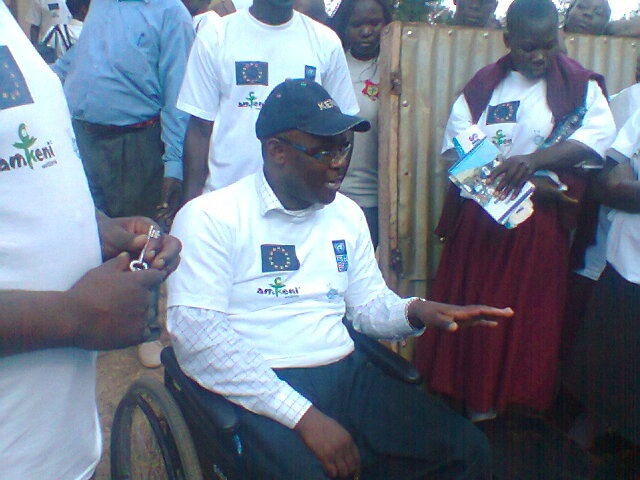 MP Tim Wanyonyi to discuss growing concerns about a parcel of land at Kibarage River site adjacent to Peponi Road.

This area is part of the wetlands designated as public land. Since the 1990s, these wetlands in Westlands which extend far beyond the above area, have been grabbed by well connected elites before being hived off by private developers and speculators, endangering flora and fauna and the environment.

It was agreed that Davinder Lamba would meet with the MP at 10 am and provide the legislator with a detailed briefing on the history of protests and campaigns to conserve the Kibarage site-actions in which Mazingira Institute and Green Belt Movement have been at the forefront  for almost twenty years.

Onyango Oloo, who is a senior writer with the Operation Firimbi Bulletin, was part of a delegation which included Lillian Muchungi and Vertisine Mbaya of Green Belt Movement;  Kibe Mwangi and George Njoroge of the Westlands Environmental Caretaker Group which met with National Lands Commission Chairman Dr. Muhammad Swazuri on June 25, 2014, urging the NLC to intervene in the matter in order to suspend the ongoing construction of a perimeter fence pending further public consultations on the legality of the development at the site. It is understood that the Presbyterian Church of East Africa claims to have a title deed to what is presumably public land.

The National Land Commission responded by visiting the site a few days ago, and later on issuing 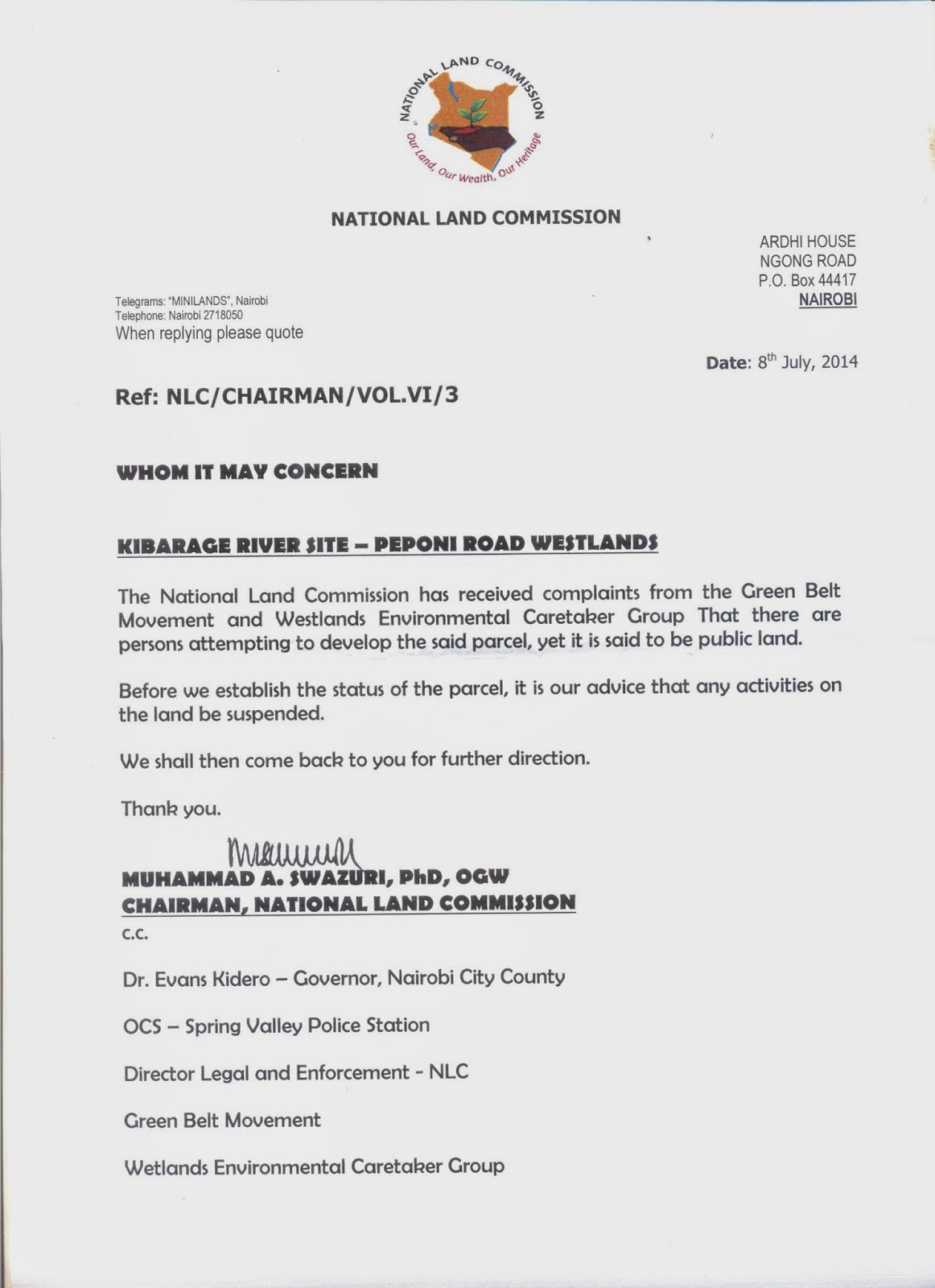 a letter dated July 8, 2014 and copied to Nairobi Governor Dr. Evans Kidero and the OCS, Spring Valley Police Station advising that any activities on the Kibarage River site Peponi Road be suspended immediately.

On Saturday, July 12, 2014, Davinder Lamba, accompanied by Onyango Oloo, left the Mazingira offices at 9:30 am and walked to the Kibarage site to keep the 10 am appointment with the Hon. Timothy Wanyonyi, MP for Westlands. They arrived at the venue 20 minutes later.
Having not seen the MP by around ten minutes after the scheduled time, Davinder called Henry Mudogo to inquire about the whereabouts of the MP and the rest of his entourage.

Two minutes later, Henry himself arrived to inform Davinder and Oloo that the MP now preferred to meet in his constituency office located within the precincts of the Freedom from Hunger Council compound, off Rhapta Road around the corner from the Baptist Church.

At the site were almost two dozen heavily armed men who from their speech and physical features appeared to be a mix of individuals from Maasai and Turkana communities.

There were also a handful of construction workers, easily identified by their hard hats.

The armed men were quite menacing to us, especially when they recognized Davinder Lamba, well known countrywide for his long standing campaign against land grabbing, corruption and environmental degradation.

Davinder on his part heartily greeted them assuring them that we had no conflict with them, even as he, Oloo, Henry and Kibe proceeded on foot up Peponi Road on their way to MP Timothy Wanyonyi’s office.

We had not walked more than a few steps when we were surrounded from the back and the front by the same armed men demanding in loud voices what we  were doing on the pavement.

They were wielding their pangas, bows and arrows and other crude weapons.

They pounced on Davinder hitting him viciously with iron bars.

They rained blows and kicks on Henry after shooting him on the forehead with an arrow. He  lost his mobile phone in the process.

Another attacker aimed an arrow at Onyango Oloo hitting his upper arm.

Fortunately, even though the arrow was embedded, it turned out to be a superficial flesh wound.

Later at the MP Shah  Hospital, Oloo got a tetanus vaccine injection and prescribed some antibiotics after his wound was dressed and treated.

It was not immediately apparent why the PCEA Church (the alleged "owner"of the parcel of land who is listed  on a notice board inside the compound as opposed to being placed prominently along Peponi Road as the client who commissioned the construction of the fence) felt so threatened as to retain a battery of ferocious armed men to guard the controversial Kibarage site on a 24 hour basis.  Kenyan security guards are not allowed to possess dangerous offensive weapons of any nature.

The entity that is in charge of PCEA properties, among other things is the PCEA Foundation.

In addition, the conditions under which the armed men live on conditions deemed unfit for human clearly violate a whole range of the country’s labour laws, apart from being in flagrant violation of the Constitution itself.

It is understood that Hon. Timothy Wanyonyi  denounced the outrage when he later visited the scene of the unprovoked violent attacks on Davinder Lamba, Onyango Oloo and Henry as well as members of the public including some tourists who were indiscriminately set upon by the armed mob.

A public response from concerned civil society groups is being prepared.

Coverage by the Star newspaper in Nairobi:

Oloo-u should not be suffering long after the torture u had in the 80s and more so in a democratic kenya which u so hard fought for-i remember Adungosi, Jeff, Wahinya, Simiyu and the rest of u guys who suffered at Kamiti-this is still a serious police case and civil case as well. Those who hired the goons must pay.