I have been reflecting on the life and times of a great African who was born and raised in South Africa.

And no, I am NOT thinking of

Nelson Mandela- even though his 87th birthday is only two days away. Nor am I thinking of

Albertina Sisulu, another doyenne of the liberation movement in South Africa. For today, scratch out the name of

Archbishop Desmond Tutu because he has not even crossed my mind in this particular context.

Actually the person I am thinking about died about two months ago-a quiet pensioner who went through life posing as a cleaner and a gardener.

Very few people would recognize his name were it be thrown out as an answer in a Jeopardy face-off.

He never had the benefit of formal education beyond the basic primary stages.

Yet this untutored, obscure, shy, modest and retiring man should have been lionized, celebrated and rewarded for his role in one of the most spectacular feats of modern medicine and scientific achievements.

was feted with a gazillion accolades globally for the feat of pulling off the first human heart transplant in the world. He unreservedly deserves the recognition and awards that came with that path-breaking feat.

But get this, there was SOMEONE ELSE who should have shared the limelight, but did not because of the ugly monster called apartheid.

Here is an excerpt from the conservative British weekly, The Economist. I have excised the name of the individual for a few seconds:

ON DECEMBER 3rd, 1967, the body of a young woman was brought to XXXX for dissection. She had been knocked down by a car as she went to buy a cake on a street in Cape Town, in South Africa. Her head injuries were so severe that she had been pronounced brain-dead at the hospital, but her
heart, uninjured, had gone on furiously pumping.

XXXX was not meant to touch this body. The young woman, Denise Darvall, was white, and he was black. The rules of the hospital, and indeed the apartheid laws of the land, forbade him to enter a white operating theatre, cut white flesh, or have dealings with white blood. For XXXX, however,the Groote Schuur hospital had made a secret exception. This black man, with his steady, dexterous hands and razor-sharp mind, was simply too good at the delicate, bloody work of organ transplantation. The chief transplant surgeon, the young, handsome, famously temperamental Christiaan Barnard, had asked to have him on his team.So the hospital had agreed, saying, as XXXX remembered, "Look, we are allowing you to do this, but you must know that you are black and that's the blood of the white. Nobody must know what you are doing."

Nobody, indeed, knew. On that December day, in one part of the operating suite, Barnard in a blaze of publicity prepared Louis Washkansky, the world's first recipient of a transplanted human heart. Fifteen metres away, behind a glass panel, XXXX's skilled black hands plucked the white heart from the white corpse and, for hours, hosed every trace of blood from it, replacing it with Washkansky's. The heart, set pumping again with electrodes, was passed to the other side of the screen, and Mr Barnard became, overnight, the most celebrated doctor in the world.

In some of the post-operation photographs XXXX inadvertently appeared, smiling broadly in his white coat, at Barnard's side. He was a cleaner, the hospital explained, or a gardener. Hospital records listed him that way, though his pay, a few hundred dollars a month, was actually that of a senior lab technician. It was the most they could give, officials later
explained, to someone who had no diploma.

Let us read on:

There had never been any question of diplomas. XXXX, born in the village of Ngcangane in the windswept Eastern Cape, had been pulled out of school at 14, when his family could no longer afford it. His life seemed likely to be cattle-herding, barefoot and in sheepskins, like many of his contemporaries. Instead, he hitch-hiked to Cape Town to find work, and managed to land a job tending lawns and rolling tennis courts at the University of Cape Town Medical School.

A black-even one as clever as he was, and as immaculately dressed, in a clean shirt, tie and Homburg hat even to work in the gardens-could not expect to get much further. But a lucky break came when, in 1954, the head of the animal research lab at the Medical School asked him for help. Robert Goetz needed a strong young man to hold down a giraffe while he dissected its neck to see why giraffes did not faint when they drank. XXXX coped admirably, and was taken on: at first to clean cages, then to hold and anaesthetise the animals, then to operate on them.

The lab was busy, with constant transplant operations on pigs and dogs to train doctors, eventually, for work on humans. XXXX never learned the techniques formally; as he put it, "I stole with my eyes". But he became an expert at liver transplants, far trickier than heart transplants, and was soon teaching others. Over 40 years he instructed several thousand trainee
surgeons, several of whom moved on to become heads of departments. Barnard admitted-though not until 2001, just before he died-that XXXX was probably technically better than he was, and certainly defter at stitching up afterwards.

Unsung, though not unappreciated, XXXX continued to work at the Medical School until 1991. When he retired, he drew a gardener's pension: 760 rand, or about $275, a month. He exploited his medical contacts to raise funds for a rural school and a mobile clinic in the Eastern Cape, but never thought of money for himself. As a result, he could pay for only one of his five children to stay to the end of high school. Recognition, with the National Order of Mapungubwe and an honorary degree in medicine from the University of Cape Town, came only a few years before his death, and long after South Africa's return to black rule.

He took it well. Bitterness was not in his nature, and he had had years of training to accept his life as apartheid had made it. On that December day in 1967, for example, as Barnard played host to the world's adoring press, XXXX, as usual, caught the bus home. Strikes, riots and road blocks
often delayed it in those days. When it came, it carried him-in his carefully pressed suit, with his well-shined shoes-to his one-room shack in the township of Langa. Because he was sending most of his pay to his wife and family, left behind in Transkei, he could not afford electricity or
running water. But he would always buy a daily newspaper; and there, the next day, he could read in banner headlines of what he had done, secretly, with his black hands, with a white heart."

That obituary is lifted directly, word for word, from the Jun 9th 2005 print edition of The Economist(hardly known for its militant defence for African causes or promotion of Black heroes and sheroes) about an unrecognised surgical pioneer who died on May 29th, aged 78 years.

But who was XXXX?

First let us put a face to the narrative: 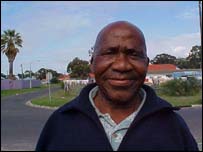 Now let us attach a NAME to that face:

Ladies and gentlemen, boys and girls, readers, trashers, surfers and drive by hecklers:

There have been other tributes to this great African surgeon.

This is from the Guardian; the following is from an African-American who used to head the Children's Fund while this other piece is from the good ole Beeb with the Washington Post rounding off the belated posthumous recognition.

It is most unfortunate that many Black pioneers are recognized in the flickering twilight of their golden years rather than at the peak of their agilities{if there is such a word :-)} and abilities.

As belated as the praise is, at least it is for a GENUINE HERO for African Scientific and Technological achievements.

What a sharp contrast to the inflated claims of one

Philip Emeagwali, the self-proclaimed "Father of the Internet"!

Strangely, CNN of all people, repeated this boast without bothering to check their facts.

The Nigerian born engineer who has, truth be said, won prizes for his brilliant work in super computing applications has over the years damaged his credibility with outlandish claims of inventing the internet, the "world's fastest computer" and owning 30 patents- claims which do not hold up to close scrutiny.

In fact it was one of his fellow Ndigbo Nigerian compatriots who skewered him most ruthlessly in a series of exposes that you can read about here and also at this link..

Wikipedia recently did a profile on him that Emeagwali (or some of his close associates) hotly disputed as you can see from
this feedback they gave to the original Wikipedia biographer.

No, I think Hamilton Naki has more in common with

Speaking of African scientists and medical trailblazers, what do our readers think of Kenya's own Dr. Arthur Obel, he of the "Pearl Omega" fame or infamy?

Looking at stories like this one and this other one, is Dr Obel closer to Naki or Emeagwali?