Songs of Joy, Anguish, Determination and Hope- Progressive Poets from Around the World

A Leisurely, Trans-Continental Cyber Seminar on Poetry for the People

You Tour Guide will be Onyango Oloo from Montreal

Do you know who this Nikki Giovanni called her"the most famous person nobody knows". She wrote her SIGNATURE poem that would be an African-American CLASSIC and liberation THEME SONG decades later, when she was still only TWENTY TWO years old. She died at the age of eighty three years old in 1998. Ten years before that she hauled Alex Haley's butt to court and SUED HIM for stealing from HER work to create HIS most famous piece, Roots.

Well, listen to her own voice as she recites her most famous poem

Yes, she told you so herself-we are talking about Margaret Walker Alexander. Here are two more well known pieces by her:

rumbling
the struggle staggers us

Here is Margaret Walker's Bio and once you finish reading that, you can check out Amiri Baraka's moving homage to her at this link

African-Americans have produced a string of stellar poets apart from Margaret Walker. For instance most of us have heard of AT LEAST ONE piece by 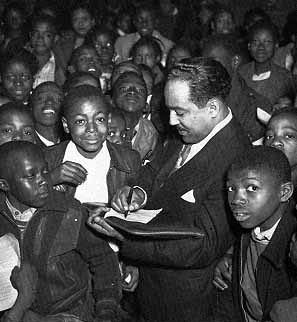 Well, if you HAVEN'T heard of Langston Hughes, here is a quick sampler:

Advertisement for the Waldorf-Astoria

The Negro Speaks of Rivers

Another well-known African-American progressive poet is Sonia Sanchez. She once composed a poem for a two year old child

Now, if there is one KENYAN who knows more about African-Americans and their poetry more than any other Kenyan that I personally know of, then it is DEFINITELY none other than

You can read an essay she wrote for a Zimbabwe newspaper here while this link includes a fairly comprehensive bibliography of her publications.


Micere Mugo was the first woman elected to be dean of the faculty of arts at the University of Nairobi. The writer of these lines was once her student. Two of her closest academic colleagues, artistic kindred souls and political comrades at that university in those days consisted of this celebrated South African couple-each of them a distinguished poet and revolutionary activist in their own right-Baleka Mbete and Keroapatse Kgositsile.

Lindelwa
One year before the first democratic elections catapulted HER to parliament, she gave this interview to the left leaning South African journal, Work in Progress.

This is his poem,
Random Notes to My Son

You can read more about him here


LISTEN to this other South African guy.

How about the FACE?

Here is a hint:

He was harassed, brutalized and locked up by the apartheid authorities for using his poetry to fight for the release and freedom of all South Africans from racist bondage; he was among the official guests who performed when Nelson Mandela was inaugrated as President of the new South Africa- AND, get THIS!

He celebrated his FIRST BIRTHDAY in freedom, barely a MONTH AGO (in August 2004) after serving SEVEN YEARS in prison,locked up by the government of Mandela and Mbeki for a crime many of his supporters around the world (including THIS writer who saw him live in performance in Toronto twice in the 1990s) DO NOT BELIEVE he could have committed.

Get more information from his Official Website and while you are there, take a moment to sign the PETITION of support and WRITE to
President Thabo Mbeki asking him to issue a FULL and UNCONDITIONAL PARDON so that Mzwakhe can once more, travel and meet his thousands of fans around the world.

And by the way, Mzwakhe is not the ONLY radical and progressive poet in contemporary South Africa.

and in this link you will find his MARXIST-LENINIST verse

We know that some poets disdain politics, saying they are only interested in the "art" in the "form" in the "structure"; that they will not stand on a soap box to recycle "tired propaganda" and similar yada yada yada blah blah blah gobbledygook.

There is this poet called

from Guatemala who has a message for the so called "apolitical intellectuals". It is one of several poems that you can find in this
location

The JAMAICAN performance artist who goes by the Rwandese sounding name

MUTABARUKA is world famous for his electrifying, humour filled, politically tinged live performances. Yet few of his fans appreciate his seminal contributions in promoting Caribbean LITERATURE through his unique
LYRICS

Also in the DUB tradition is another Jamaican descended British poet of African heritage,

LINTON KWESI JOHNSON, who started life as a record company employee and
WRITER and member of an anti-racist collective before finding fame as a MUSICIAN, also of world repute.

You will find his lyrics
HERE and

Many of the world's REVOLUTIONARY political leaders were also skilled poets- which may shock those who characterize political organizers as humourless one track minded automatons with no time for "emotions" and "feelings"....

Let us run very quickly through our gallery of socialist oriented word-smiths.

Dr.Ernesto Che Guevara, in his famous poem VENCEREMOS who once said" Let me say, at the risk of sounding ridiculous, that the true revolutionary is guided by a great feeling of love"

This
AUDIO clip introduces the man and his
POEMS

Ho Chi Minh is known as the "Uncle" of the Vietnamese Revolution. But he was also deft with his
poetic brush


Nazim Hikmet is very much revered not only in his native Turkey, but in progressive circles around the world.. Here is he is giving some interesting tips to anyone who may have the misfortune of finding themselves in

So is
Faiz Ahmed Faizof Pakistan, Mahmoud
Darwish of Palestine (see these other pieces also:
one, and this
other one) James
Conolly of Ireland,
Pablo Neruda and
Victor Jara of
Chile while the GREAT German playwright, literary theorist, COMMUNIST and POET

Bertolt Brecht is IN A CLASS OF HIS OWN IN TERMS OF HIS SHEER CONTRIBUTIONS TO THEATRE, MUSIC, POETRY, LITERARY THEORY and INTERNATIONAL SOLIDARITY.

The following are but a tiny fraction of his most well known poems:

Questions from a Worker Who Reads

To Those Born After

Other Brecht Poems are viewable VIA THIS LINK

The late Allen Ginbserg was a colourful, vivacious and controversial figure on the American artistic scene; he was also highly political, as can be seen in this
anti-CIA piece

John Lennon is remembered as the most well known- and perhaps the most talented Beatle, at one point the most well known and most successful music group on planet earth. Less appreciated however is his keen POLITICAL vision and his undeniable dexterity with
lyrics. YOKO ONO has simply been seen as the Japanese WIFE of John that a lot of whis WHITE fans could NOT DEAL WITH the INTER-RACIAL dimension of their relationship given John's deified iconic status among the millions of the band's frothing global groupies.

Yoko Ono was a well established and INDEPENDENT POET and ARTIST in HER OWN RIGHT BEFORE she ever set eyes on Lennon.

Here is the proof of her talent and the MILITANCY of her political vision.

The Arab world has a number of women poets who have made a tremendous impact with their work, like
Fawziya Khalid of Saudi Arabia and
Nadia Tueni of Lebanon. Click on the following link to find out more about

Here is a song by
Hae Kyoung Ahn based on a poem by
MEENA, the martyred founding leader of the Revolutionary Association of the Women of Afghanistan.

And one can CANNOT talk about women who use their voices to sing of progress, justice, equality, democracy and peace without including a reference to the path breaking and acclaimed a ccappela ensemble of African-American griots

known collectively as
SWEET HONEY IN THE ROCK

Other remarkable revolutionary poetic voices including that of
Aboullah al Baradouni of Yemen Abd al Wahhab al
Bayyati ,Ali Sardar
Jafri of Pakistan and
Erich Fried who is not only Austrian but Jewish as well.

Another singer who is revered as a progressive poet is the veteran American folk singer
Pete Seeger and not too too many people know that Pablo Picasso who died as a wealthy multi-millionaire celebrity painter, was not only a
POET, but became a MEMBER OF the French Communist Party in 1944 and remained loyal to that organization until his dying day in
1973

And for those who think that e. e. cummings was merely CUTE because he wrote in lower case letters, think again, especially after visiting this

In fact it is EXTREMELY IRONIC and AMUSING, after taking this world wide tour de force of radical, militant and revolutionary poems from social activists in many countries on all continents, to be accosted by THESE
EARNEST TEENAGE CHRISTIAN lyrics of the young
Fredrich Engels or this lovesick romantic note of another German teenager called
Karl Marxpenning some sizzling verse to his one and only,
Jenny!Apparently, from the look of things, Marxists EVERYWHERE- from Germany to Argentina to Yemen to Kenya to Pakistan to China, also,like the rest of the billions of humankind, fall in love at first sight and are also kicked to the curb with same boring regularity.

Little did we suspect, eh, readers of the KDP blog?

Let us close with this LOYAL DEDICATION of an
OBEDIENT SON to a FATHER.....

I hope you have enjoyed the ride,

A Kenyan hack PRETENDING to be a "poet" in Montreal.

Just think of that.

Some people are so DELUSIONAL, I tell you....

Posted by Kenya Democracy Project at 4:20 AM