KCA University located in Ruaraka, on the outskirts of Nairobi is an institution of higher learning focusing on business studies that was set up in 1989 by the Institute of  Public Accountants of Kenya as a  college of accountancy. The dream of morphing into a fully fledged university was mooted around 1997. It diversified into broader academic matters in 2000 and seven years later realized  it became a private university. In 2012 KCA University received its full charter from the Commission on Higher Education. From its initial intake of  170 students back in 1989 it now enrolls about 15,000 students annually and has  four campuses in Kenya and South Sudan.

A private university known for churning out accountants and other business graduates is hardly the place to associate with social justice activism and earnest democratic strirrings  punctuated with passionate rallying cries for peace, national harmony and conflict transformation.

Yet this was exactly what the main campus of KCA University became on Tuesday, February 12, 2013.

It was the day after the  historic Kenyan presidential debates relayed live across all television channels and broadcast by at least 34 radio stations around the country.

The main impetus for this welcome dose of progressive consciousness came from the meticulous organizing from fastest rising musical talent on the contemporary Kenyan scene- the inimitable Rabbit aka Kaka Sungura. 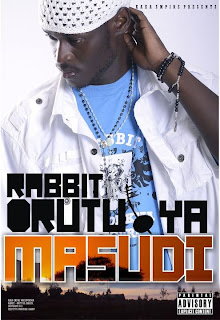 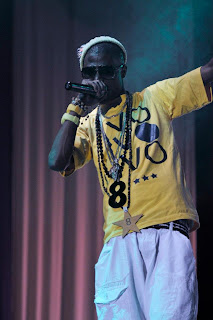 A modest,  down to earth soft-spoken poet and rapper Rabbit has  quickly made a name  for himself all over East Africa for his clever and inventive word play and well crafted videos. He has become the soundtrack articulating the aspirations, the angst, the perspectives of Kenyan youth. Some of his stand out tracks include Swahili Shakespeare, Adisia,  Uko Sure and Nakuchukia.  He has done collabos with other Kenyan, Tanzanian and  American artistes. His songs are in heavy rotation on Kenya's youth oriented radio and television programs-making him a household name even though he is still in his early twenties.

A savvy entrepreneur, Rabbit has a clothing line called Kaka Empire which churns out T-shirts, custom made jeans and other paraphernalia. He  produces and distributes his own videos and cds. He has a dedicated crew of fellow  Kenyan youth and he acts as a mentor to many who idolize him for his verbal dexterity on the mic.

Rabbit country wide tour has taken him to various Kenyan colleges and universities... 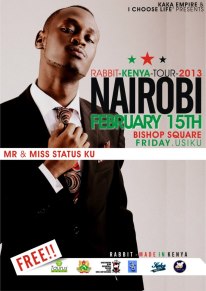 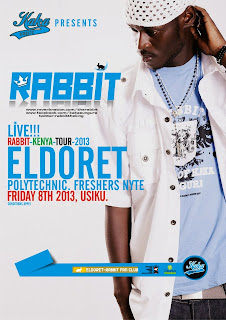 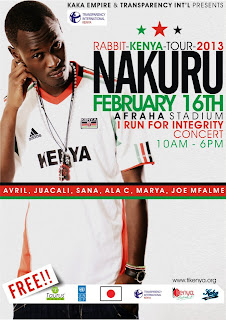 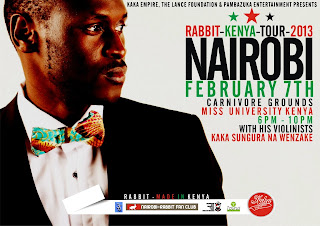 Most of his shows have progressive themes dealing with relevant and burning social, economic and political issues- from preaceful elections, integrity to the fight against corruption.

I was pleasantly surprised and felt very much honoured when Rabbit recently reached out to me through one of his close collaborators,  a young activist and word smith that I have collaborated with on a couple  of community-based social justice projects dating  back to the  last three years. We met at the Tom Mboya memorial where the statue of the Kenyan nationalist was erected in downtown Nairobi between Moi Avenue and Tom Mboya Street just across from where another famous Kenyan freedom fighter, Dedan Kimathi is immortalized in yet another landmark statue. After some introductions they explained me about their  current project 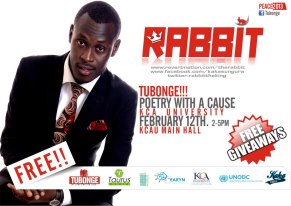 The event lived up to its billing hype.

The auditorium of  KCA University was soon filled to capacity with young women and men, students at the institution who sacrificed a whole afternoon on Tuesday to come and partake of the wisdom that Rabbit  and his crew was dropping.

But before he did a single one of his well known songs, Rabbit was basically the MC, presiding over a  fairly spontaneous town hall free for all where the  participants held forth on a range of political and current affairs issues. Happening on the day after the televised Kenyan presidential debates the KCA students expressed their candidate opinions on the issues  or rather non issues framing the  2013 election campaign.  A young aspirant described his harrowing experience of being harassed and intimidated by deep pocketed big wig aspirants to drop out as a candidate during the  recent political  party primaries. Several speakers testified how the debate had made them SWITCH their vote.Others exhorted their fellow youth that if they were PLANNING TO VOTE ALONG TRIBAL LINES, then they should not even bother to show up on March  4th  election day. The discussion was very rich in content and punctuated by intelligent insights and  peppered with humour and good will.

Just before Rabbit took the stage to bring the house down with an electrifying accapella rendition of his poetry and a musically flavoured performance of his hits, the organizers who had invited me to the event as a  guest speaker, welcomed Onyango Oloo to make a short address to the audience 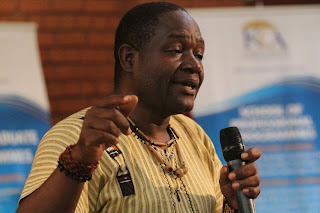 Needless to say Rabbit aka Kaka Sungura's stellar performance was the MAIN REASON why the students had waited patiently for over three hours: 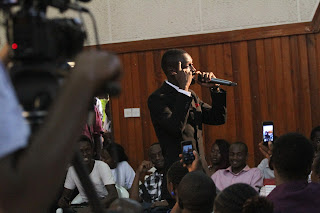 Kaka Sungura is a young  Kenyan isionary spouting  wisdom and ideological clarity through his insightful lyrics. He is very much grounded in his experiences as an ordinary Kenyan growing up with all the trials and tribulations of the Nairobi where the majority of the city dwellers are to be found- not in the posh petit bourgeois enclaves of Lavington, Hurlingham, Loresho, Kilimani and Kileleshwa but in the gritty every day realities of Eastliegh, Dandora, Kangemi, Mwiki, Kaloleni, Riruta, Jericho, Jerusalem, Ofafa Maringo, Mbotela,  Mukuru, Kibera and Kawangware.

Kudos to this young genius who follows in the tradition of Kalamashaka, Ukoo Fulani, Do Klan Revolution, Angel and Sinpare.

Please read this fascinating interview which was carried in the Buzz magazine insert in the  February 17, 2013 edition of the Sunday Nation: