I was a little bit startled when I saw this story in the August 22, 2009 edition of the Saturday Nation, reviewing the publication

We Lived to Tell. 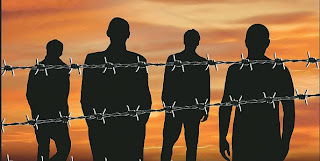 "The Dark Legacy" was quite appropriate.

But what was even more dark was another story in the same Saturday Nation (of August 22, 2009) where William Ruto is reported to have led a group of 15 M.Ps in telling Kenyans that they have a right to support impunity and those who oppose them will be defeated in parliament.

In fact they (Ruto and company) were furious that those who want justice for victims of PEV in Kenya were "intimidating" them.

It would appear to me that folks like Ruto think intimidation is their exclusive domain after all they seem to have been doing it for a whole generation and are very confident they can have their way any time they want.

I will come back to that shortly.

But here is the 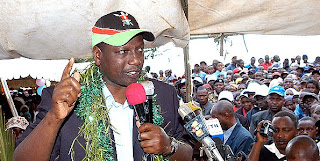 Back to "The Dark Legacy".

I was personally involved in putting together the We Lived to Tell publication in September of 2003.

What was inexplicably shocking to me was not the uniform stories of horror and evil deeds perpetrated by former President Daniel arap Moi and his cohorts on Kenyans, I knew that already.

What surprised and encouraged me was the sheer determination by the comrades that they will live to see this battle to its logical end.

And they have done a million things since then to further the battles for a freer and more democratic Kenya.

There is something very refreshing to be among comrades who do not count their successes in life in terms of how many shambas they robbed from the ADC or how many times they worked for Moi to do mischief against the nation but rather on what more they need to do to bring justice in the land.

Sitting with these Nyayo torture survivors some of whom are university lecturers, professionals in every sector of human development and just simple joes and vinyangarika like Adongo Ogony, one gets a sense nothing really shakes these people up. They expect to meet battle and resistance at every corner in the effort of Kenyans for a free nation and they want to go there and meet it.

So I thoroughly enjoyed working directly with the comrades once again to put up that piece of work.

We had a lot of fun and enjoyed the companionship.

Sometimes people think we are a group of grim folks beating their heads on the walls with anger every minute.

They know us better.

We are fun people most of the time.

I think we laugh and joke around more than we shake our fists at injustice in the land and beyond.

But don't be deceived.

I would urge those who read the book to pay close attention to the preceding chapters to the body of the document namely, Dedications, Prologue and Introduction and to the conclusion, Chapter 13 entitled What Next?

Those chapters are crucial in understanding the grim stories in between.

It would appear to me that the very things we predicted six years ago have come to pass. If we pick up those lessons, chances are we are heading in the right direction. I seem to think we are. History is full of contradictions and every struggle for social justice goes through its own peculiar path of contradictions.

As to the Rutos-Isaac and William, I have no grudges against them. In fact I have been accused of being a William Ruto supporter.

I am fine with that, but I will say this. Isaac Ruto was a fellow student leader with me and folks like Onyango Akello, David Murathe, Titus Adungosi to mention only a few.

He (Isaac Ruto) was reputed to be a close Nyayo spy on students in the 1980s and we all know what the consequences of those were as exemplified in the We Lived to Tell historic document.

I have every reason to believe the allegations are true considering the path his life took.

Today Isaac Ruto's name is appearing in every land grabbing scam in the country including the ADC farms and the Mau.

I would think those are just tips of some terrible icebergs that hide mountains of the Moi treachery that still bedevil our country as its consequences continue to explode by the day from environmental disasters, to massive land grabbing from state institutions etc all of which is entrenched in the culture of impunity.

What the whole country knows is that both William Ruto and Isaac Ruto were the founder members of YK92, a literal terror group similar to the brown shirts of Adolf Hitler an his Nazi mass murderers.

They obviously were rewarded handsomely for their efforts as emerging evidence continues to prove.

They have every right to defend their gains, but I would suggest to them that they have no right and may not be able to deny all other Kenyans the right to reclaim their dignity as human beings.

I don't think any of us want a fight with the Mois, the Rutos and whoever they have pocketed, but I would want to assure them that we are very ready for that fight should it become necessary.

The Narc squabbles starting from 2003 that was brought about by tribal jingosim from State House saved the Moi gangsters as both sides started to court them for support.

What happened is now water under the bridge and nobody can claim the monopoly of being right on this matter.

But if the Mois and the Rutos think they now own the country and Kenyans must bend to their every wish ati because they supported Raila or whoever, they are in for a big surprise. Kenyans really don't care whether Raila becomes the next president or not. It is not important.

Kenyans want justice and are ready to move forward, but I would advise those living in stone houses not to be so generous with the stones.

At the end of the day justice for the nation is more important to Kenyans than Raila, Ruto or Kibaki.

Stop fooling around with the citizens.

The Imanyara bill is going nowhere as some of us have said so many times, but justice is coming without a doubt.

Kenyans do not need any permission from any politician for that.

If they did we would still be under one party rule with baba na mama as an over eighty year old president.

Obviously that is not the case, or it?

That is the question.

PS: Click here to read the tribute to Adongo Ogony from one of his closest friends and comrades.

I did not know that the whole involvement with Ruto and Moit went so deep.. scary stuff.

Wanasema Power corrupts, and this is clearly proof of that.