Banning Sigara and Pombe Ads Is Rather Silly, If You Ask Me

I travelled to the

Ethiopian capital and back in twelve seconds, perched on my trusty Mac mouse and while there, I quickly picked up yesterday's Addis Tribune which informed me thus:

The Kenyan government says it will soon ban alcohol and tobacco advertisements from television and billboards. Government spokesman Alfred Mutua said the ban was intended to protect children from the harmful effects of alcohol consumption. Tobacco adverts are also set to be banned. In February, tobacco and liquor adverts were outlawed near schools. Last month, the government said it would ban smoking in public places and raise taxes on cigarettes. "The government notes that advertisements and media productions have a huge impact on behaviour and influence decision making of many people," Mr Mutua said. "As a result, it is not easy to shield children from the impact of certain advertisements." Announcing the move to ban smoking in public places, Director of Medical Services (DMS) James Nyikal said tobacco kills some 12,000 Kenyans each year and that banning smoking in bars, churches and sport stadiums would reduce that figure. He said that Kenya spends five times more treating health problems from smoking than it raises in tobacco tax.

Here is a much more detailed story from the Daily Nation in Nairobi.

Instead of congratulating the good doctor and the good minister and the good spinmeister for taking a resolute step to stem the tide of deaths caused by lung cancer and cirrhosis of the liver, I merely guffawed at Ngilu,Nyikal, Mutua and whoever else were party to this less than brilliant brain wave.

Do not get me wrong.

I am a non-smoker who has never smoked. In fact I have a very intense allergic reaction to cigarette smoke that affects me even if I step into a room where someone smoked three hours previously. No one can smoke at my place and I have been known to turn DOWN intense lip locking sessions with members of the other sex if I discover they partake of those cancer sticks(just kidding on that one!)

I think that Kenyans should come together across the country and launch a similar class action suit against British American Tobbacco for all their poison brands like Sportsman, SM, Embassy- you name it. We know that due to less stringent quality and health and safety standards in the Third World these narcotic multinational drug dealers like BAT get away with nicotine levels that would plunge them in scalding legal oil in their so called mother countries. In addition BAT, has been

ripping off Kenyan tobacco farmers for too long if you were to go by the 411 in this link.

BAT the Least Responsible Company in the World.

As regards pombe, I am a social drinker whose choices are limited to beer and wine so I am not about to go sanctimonious on all those ethanol and sometimes methanol guzzlers. More seriously, a few months ago I wrote two essays, one calling for the LEGALIZATION of Chang'aa in Kenya and the other one doing an in-depth examination of Alcoholism.

Tasbih Counting stern abolitionist who thinks that pombe na sigara is the root of all evil. If you want to talk about evil, please haul in that non-smoking teetotaler Born Again American called George Bush for intense interrogation and you will begin heading places.

Of course the reaction to the news has been swift and vitriolic as you can gauge from Tom Mshindi's fulminations. I am not sure I am necessarily THAT enamoured of the whining and anxious hand-wringig of Big Business who are panicking because they still want to hear ka-ching! every time they view an ad on television or hear it on the radio and I find it slightly ludicrous for people in the marketing sector who have no affinity with human rights struggles invoking free speech to complain about a cutback in offensive, often sexist ads that openly encourage young people to take up smoking often by misleading them of a mythical connection between Sportsman and athletic prowess, and other upmarket brands with being "hip" "trendy" and "cutting edge".

At the same time, I want to PUKE when I see the face of the Kenyan Pro-Death Movement, 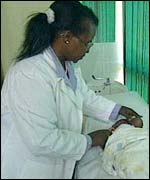 Why do I think the move to ban these ads is SILLY?

Because you and I know that the biggest ads that the industry gets come from the mothers and fathers, older brothers and sisters, uncles and aunties who organize a lot of their social activity around alcohol and cigarettes. Also, the rationale is simply wrong-headed given what we know about the the culture of debauchery that is supported by both home-based and commercial nyama choma gigs- that are never complete without the pombe, sigara na sijui nini tena.

One would have imagined that there was an obvious need to involve first and foremost recovering alcholics and former smokers in a comprehensive educational awareness campaign against drinking and smoking in Kenya.

What I would have done had I been part of the decision making process would have been to make stipulations urging the cigarette and alcohol manufacturers to get together with the media, advertising houses and affiliated businesses to set up a National Anti-Smoking and Temperance Fund that would support harm reduction, smoking awareness and AA programs across the country. I would involve the schools, the police, the hospitals and again the media in a national campaign targeting youth aged 7 to 17 on a PREVENTION program that keeps them from ever picking up these noxious habits..

On a related note, what is the Kenya government doing about the growing abuse of cocaine, crack and other hard street drugs all over the country. I was speaking the other day to a twentysomething young man here in Montreal who grew up in Mombasa and he shocked me when he told me of the young kids who are shooting up at the age of thirteen, fourteen, fifteen. The story that broke my heart involved this teenager who grabbed his own brand new baby brother and threatened to throw him down an open manhole if his own mother did not give him muthendi to buy drugs. Last year one of my own nephews died in the streets of Nairobi as a drug addict and he was barely twenty five!

It is not too late.

The government should cancel its ban and try and consult with all the above mentioned stake holders to come up with something which is more sane and sustainable- something not driven by a hare brained desperation to pander to the Kenyan Religious Right.

In fact I would like to publicly WARN Health Minister Charity Ngilu that she should be VERY CAREFUL with this issue because she is taking on major players in the tobacco, media, marketing and other key sectors of the Kenyan neo-colonial economy. At the local level these are people who are closely linked to powerful politicians. At the international level, BAT has a lot of clout. If she is going to grapple with these corporate thugs, she should start taking professional wrestling lessons from people like

To swipe a quip trademarked by and registered to my American-based multi-lingual Kenyan buddy Papa F:

wg-k said...
This comment has been removed by a blog administrator.
5:10 AM

oops, i just deleted my post because i had put an incoherent thought. here it is;

hi, i wanted to blog about this, but you beat me to it. my first thought on reading the story in the nation was, why the heck can't they come up with an awareness campaign instead? this idiotic move just deals with the symptoms and not the problem.

another idea is that more serious penalties are warranted as far as the sale of alcohol and tobacco to minors.

it's funny--not--how very often the "solution" the govt (of course with outside pressure) chooses is not a solution at all. for example refusing to teach sex education in schools because it will encourage promiscuity. huh?! i guess now there are fewer young people having pre-marital sex and soon there will be fewer young people drinking and smoking.

Excellent work on this weblog. I am planning to tell my friends and family about this web site. Maybe you will find my blog interesting. good things about stop smoking