Let Us Make Robinson Githae The Minister for Food Security

Some Culinary Tips from Onyango Oloo in Montreal

You know, people have completely misunderstood the words and intentions of Kiraitu’s deputy.

Not too long ago, he suggested that Kenyans should be, shall we say, a little more broadminded about their culinary habits.

I mean, why should we stick to kuon,muthokoi, ring aliya, githeri, ubwabwa, sugaar and pilau?

Let us get us a little edgier.

After all, we are already chomping on zebra meat at the Carnivore, feasting on crocodiles in Mungatana’s village and not above roasting very reluctant donkeys in Turkana land. The Luos love those flying termites and some sections of the Abaluhyia eat those caterpillars that we used to call in Kisa West “Ombembo”(I hope I am not saying it with a Meru accent, because that would be definitely OND for a Ruo).

And of course, the underground Giriama classic delicacy-KAZORA which is just cooked FIELD RATS to the uninitiated...

And speaking of rats, I think it is about time we fuatad the nyayos of the Great Robinson Githae (who was recently asked by this Standard writer)whether the Kenyan assistant minister practices what he preaches.

I will give the Mheshimiwa the Benefit of MY DOUBT.

Who knows what Hon. Githae chomps on, away from the prying eyes of the Kenyan media? Perhaps he craves locusts for breakfast and gorillas for lunch. I mean, who the hell knows? But there is something ZESTY he is eating, behind our very backs.

I have my deep suspicions, but I am keeping those to myself- I will not comment on rumours circulating in Kirinyaga District that the man is a confirmed cannibal. But watch your backs every time you invite the burly Mheshimiwa for a local harambee effort. Entire families have been known to disappear, only to reappear as nyamachoma remains somewhere in the vicinity of Sheria House.

Folks I am serious:

President Mwai Kibaki should create a new ministry-The Ministry of Food Security and the Hon. Robinson Githae should be promoted to head it.

I can already see what kind of a kick ass Waziri he would be, corralling the villagers of Anyiko and Nyamninia to dig deeper for that aardvark or snag that slowly moving kinyong'a and exhorting the women of Kwa Jomvu to capture more earth worms…

But if he really wants to make a splash, he should promote RATS as the NEW DESIGNER MEAT.

This is a GLOBAL delicacy,LOVED not only by our fellow Kenyans in Mazeras and Kilifi, but the good people of Laos and the billions in China.

Let us PROVE IT. 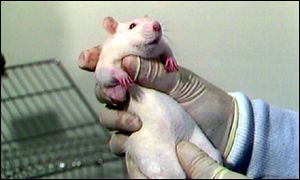 In some parts of the world, some people actually domesticate them, the way you would maintain a poultry farm, feeding them MILK

While in other parts of the world, some people are not that PATIENT, dispatching them to the market as fast as possible:

Well, enough of the formalities.

The Kenya Democracy Project would like to walk our readers through a pictorial step by step of how to transform a pesky live rat into a delicious cooked meal.

We will let the pictures speak for themselves:

Can you pass the Tabasco Sauce, Please:

My name is Tinashe Mbabazi.I am currently a student here in Canada from Zimbabwe.

I think your downright insulting comments and sarcasm stem from plain and simple ignorance'. I just think you are ignorant.Communities all over the world eat the so-called pests and vermin that you oh-so tarnish.I for one can say that the field rats are a delicacy where I come from and that YES!..they have helped populations of millions able to live in times of drought.

I was in Kenya around the time of the famine working for the Sustainable Development Foundation based here in Canada.Your comments just show how misconstrued and twisted you can be to achieve an agenda-whichever it may be..your hatred of those in power notwithstanding.

Getting people off subsistence and dependency on just 1 out of a million food varieties-some even more nutritious than the norm has helped helped many a population.Why should a a rancher or goat herder see his family die of hunger..while awaiting corn,when he could just as easily slaughter and sell his animals before the drought gets them?..Please explain to me the gist of your article because quite frankly it portrayed you as just petty and to some extent very elitist.Not practical at all.