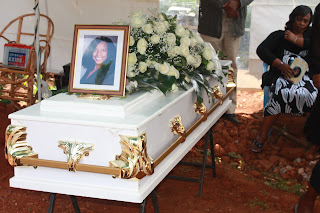 A Tribute by Onyango Oloo

Lillian Mwikali Andree, fondly known by her online Jukwaa handle as "Kasuku" was laid to rest on Saturday, November 24, 2012 at her rural home of Mithanga village, Mumbuni location in Machakos.

Hundreds  of people showed up at the 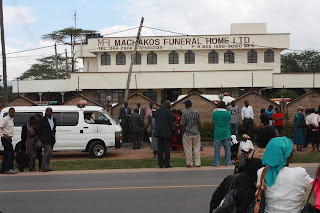 Machakos mortuary and her rural home for the  teary, celebratory 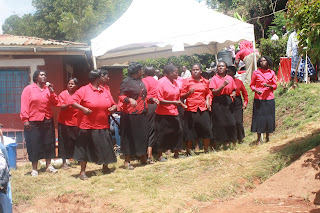 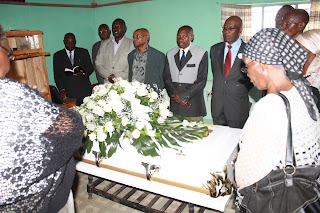 and sad send off. 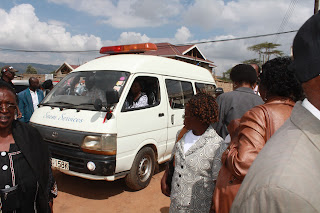 There were lots of floral tributes from her father 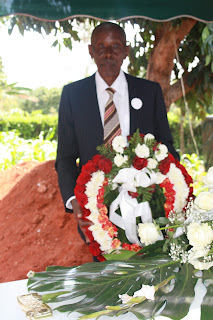 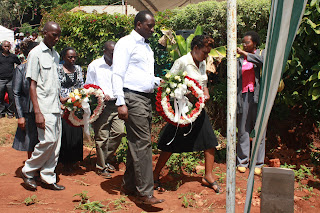 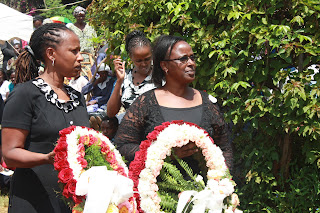 her sisters and other relatives. Her  German husband Benhard Bilo was unable to attend because his passport had expired and he needed six weeks to renew that travel document according to information conveyed to the mourners. 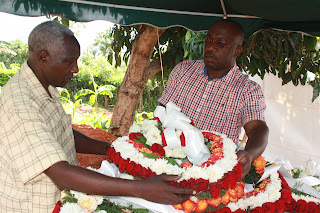 Jukwaa was represented by its founder and administrator, 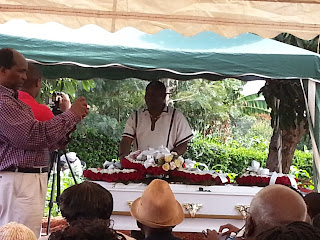 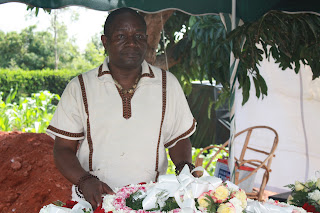 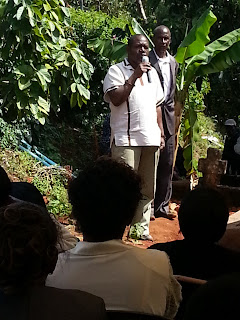 He brought greetings from Jukwaa members in Germany, Norway, Sweden, the United Arab Emirates, Russia, South Korea, Holland, Belgium, Tunisia, South Africa, Botswana, Tanzania, Zimbabwe, Uganda, Ethiopia, the United States, Mexico, Canada, Brazil, India, Kenya, Jamaica, the United Kingdom and other areas around the globe. Jukwaa was committed he said, to  seeing that justice was done in finding and convicting the  violent, heartless criminals who murdered Lillian Mwikali Andree in such a brutal manner. He spoke of the outpouring of condolences from Jukwaa members and reported on what he had done to contact the relevant  authorities to share the information he had regarding this case and said that some Jukwaa members had taken the  initiative in writing to all the presidential candidates as well as the heads of the police and CID urging for concrete action to be taken. He added, tongue in cheek that all his attempts so far to reach Maurice Kilonzo, Lillian's lawyer had been met with  a robotic digital message of "Mteja  Hapatikani" (the subscriber is unavailable) and hoped that since Kilonzo was present at the funeral perhaps Oloo would have a chance for a one on one chat.

As it happens it was 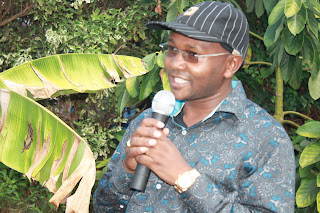 Maurice Kilonzo himself who followed Oloo to the podium. 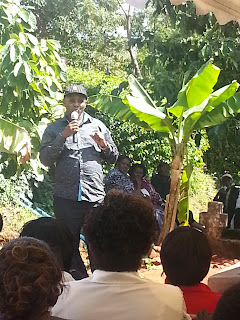 Kilonzo explained that due to several death threats to him personally as a KEY PROSECUTION WITNESS in the  Lillian homicide case, he had been  screening all his calls as part of a whole raft of security measures to ensure his safety.  He revealed that the chief suspect, Emiel Van Der Werf had approached him directly on November 12, 2012 to  urge him to  hand over the case to another lawyer. This was the DAY AFTER Lillian's  killing. Mr. Kilonzo was  very militant and adamant, speaking with visible anger about the brutal slaying of his client. He shared a lot of valuable insight about the matter.

Everyone, from Lillian's father, Dishon Mwanzia Tua to her sisters, brothers, cousins, aunties, uncles, in laws and other members of her family spoke in one strong united and courageous voice about the need for  truth and justice saying that they would not relent until the matter was  successfully concluded.

Jukwaa got a hearty round of applause for its spontaneous global solidarity with their departed member Kasuku. At the final prayers, the pastors and other religious clergy specifically called  for "The Blood of Our Lord Jesus Christ to protect Onyango Oloo and lawyer Maurice Kilonzo  from the evil plots of those who may be trying to harm them in their pursuit for justice."

From what I later gathered from some key sources at the funeral ( whom I cannot mention for various reasons), I was able to glean the following:

1. The killers of Lillian Mwikali Andree are known to the relevant investigating authorities who have details of how many of them were part of the conspiracy, their names, places of residence and occupation;


2. A Sailfish Club member who was part of Lillian's security detail was a WITNESS but NOT a perpetrator of the crime has fled from Malindi out of fear for his life and is hiding out in his rural (former) Western Province home;

4. The spouse of Emiel Van Der Werf has been linked to  earlier killings involving the Sailfish Club. Around 1995 the bodies of two German businessmen were found burnt almost beyond  recognition. They had  been tied to the ownership wrangles to the property. Mrs. Van Der Werf according to these accounts was once married/ or living with one of these  dead Germans. After their killings, this Kenyan born woman hooked up with Mr. Van Der Werf as a companion and later wife. She is the woman  who  is reputed to have been approached by Lillian when she went to the Sailfish Club to prove her ownership of the property;

6. Lillian was murdered on her 52nd birthday INSIDE the Sailfish Club. Earlier that evening she had telephoned her lawyer Maurice Kilonzo to report that some unknown people claiming to be "lawyers" had contacted her, wanting to "serve her with some papers regarding her dispute with the club". Her lawyer advised her NOT to deal with them because legally she could not be served after six o'clock on the weekend. He also advised her to check out from the Sailfish Club and  move into his Malindi residence AFTER calling the cops. He last spoke to Lillian around 10 pm on the evening she was murdered. Mr. Kilonzo has promised to  avail Jukwaa with a detailed statement on what he knows about this case. At some point her killers barged into her room, overpowered her in the course of which they broke one of her arms, bound her limbs, stabbed her in the neck before bludgeoning her repeatedly with a blunt weapon. To stem the amount of blood rushing from Lillian they stuffed her in a plastic bag before  wrapping her dead body in the bed sheets in the bed she was sleeping in. The fact that her panties and other under garments were used to blindfold and gag her may or may not point to a sexual assault dimension to the grisly murder. It is reported that a lorry (truck) was summoned to the premises in a bid perhaps of  transporting the body out of the club. The vehicle left without its  lifeless human would be cargo. This is when, I was told, the body may have been stuffed in the Club's  septic tank to avoid detection. Mr. Van Der Werf is reported to have been sighted at the facility around the time of the murder.

7. There is a separate lawyer pursuing the  property rights of Lillian. Mr. Kilonzo revealed at the funeral that he has ALL the relevant documents to prove Lillian's ownership of the Sailfish Club. There is a likelihood that all other  purported documents claiming ownership from other  quarters are forgeries. It has been decided that due to the centrality of Mr. Kilonzo in the  criminal case of homicide as a material prosecution witness,  he needs to step aside from directly representing Lillian as a lawyer at this point in time.

8. A Legal Defence bank account drawn up in Lillian Mwikali's name is being set up and soon her supporters will be provided with the account details so that they can know where to remit any contributions.


The whole tragedy surrounding Lillian Mwikali Andree aka "Kasuku" has driven home a point to me as a blogger and social media aficionado.
And it is a a simple statement:


The Jukwaas, Kenyaonlines, Africa-Opeds, Kenya Talk and other online communities and cyber forums which are often abused and misused to spew xenophobia, racism, sexism, tribalism and other forms of fear mongering among Kenyans and other people around the world can indeed by sources, ambassadors and conduits for  national and international friendship and harmony; these sites can be powerful tools for social justice, conflict transformation and weapons for promoting human rights  speaking truth to power. 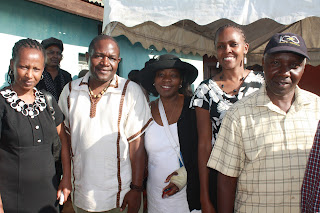 Anonymous said...
This comment has been removed by a blog administrator.
3:57 AM