Reflections on Democracy and Political Tolerance

It is the morning after the day before. 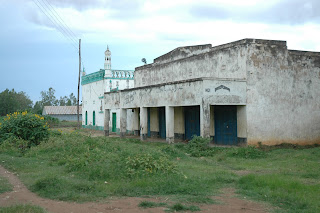 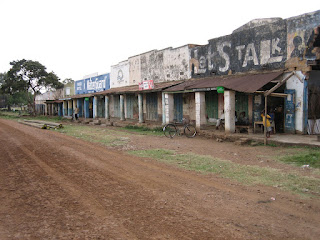 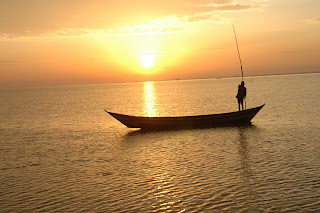 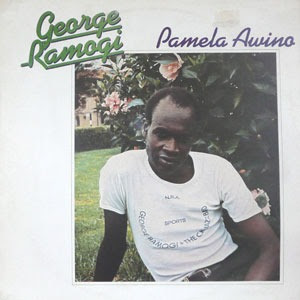 I have woken up in a picturesque part of Old Town, the history drenched section of the Muslim Quarter of the Seventh Day Adventist dominated urban-rural Kendu Bay area in Karachuonyo, famous for its annual show and its pioneering role in the evolution of the Made-in-Kenya Benga musical genre- the late great George Ramogi was born, raised and buried here.


A more contemporary exponent, Ongoro-vocalist, guitarist and co-leader of the Eldoret-based Jamnazi Band, well known for its rumba/benga fusion hits 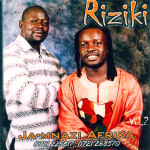 like I Am Not Sober, Osiepe and Riziki-is also a proud son of Kendu.

I am here to bury my 80 year old mother in law.

You see, my spouse comes from a polygamous family. The recently departed Mama Margaret Sijenyi Nyar Ogada is my wife’s mother’s co-wife as well as elder sister.

My father-in-law, Mzee John Osano, is a highly respected octogenarian patriarch in the community, a retiree from the now defunct East African Community; a cousin of Paul Mboya, the path breaking author of

Luo Kitgi gi Timbegi ("The Customs and Traditions of the Luo People").

Incidentally, Oriang’, the village where my wife comes from, is a stone’s throw from Kanyadhiang’ Kogweno, where Barack Obama’s grandfather Hussein was born and raised.

Since I am a son in law, the cultural strictures of my Luo community prevent me from either sleeping in or entering the Osano homestead (an ODM stronghold) before the actual funeral day.

That is why I am keyboarding these lines at five o’clock in the morning from a dingy little room, powered with a solar lamp in this obscure bar/boarding and lodging establishment in Kendu Old Town which is home to one of the oldest Muslim enclaves in the western part of Kenya, along with Mumias in the former Western Province.

Before I proceed,  a minute of sober reflection and mkono wa tanzia on the passing of Martin Shikuku, the 78 year old veteran nationalist who rejoined the ancestors on the same day (albeit in different years) as Mzee Jomo Kenyatta and Kijana Wamalwa. Shikuku was for many years, my MP for Butere-my ethnically mixed village of Luanda Dudi had many of us from the Gem Luo speaking folks residing and voting in his constituency which has now been subdivided, with our part falling in Khwisero. Shikuku spoke fluent Luo and one of his wives known for being the long time host, Shangazi Dolly of VOK’s Kipindi cha Watoto, was from Alego.

I said at the outset that this is the morning after the day before.

I alighted from the matatu I took from Ahero at the Kendu Bay stage opposite the Roman Green restaurant at around four thirty on Thursday afternoon.

The reason I boarded a matatu from Ahero is because I had been driven there under police escort from the Kisumu Hotel where Miguna Miguna and I, along with members of our small Peeling Back the Mask County Tour crew had been confronted by a very hostile crowd of mostly ODM affiliated young supporters of Raila Odinga who had occupied most of the two hundred seats in the upper conference room of the hotel we had booked for the function. What is ironic for me is that the highlights flashed on television and the sound bites on radio last night of the Kisumu incident were a very partial and misleading interpretation of the event itself.

Yesterday had begun early, slightly past seven thirty in the am with our departure from the Kericho County Club where we had slept overnight after a successful encounter with that town’s residents at the Tea Hotel where Miguna had addressed approximately 150 people who had showed up to listen him expound on the reasons why he churned out his now heavily discussed and debated political memoirs. Actually were it not for the fact  several other Kericho residents were mistakenly waiting for Peeling Back the Mask’s author at a different location, the audience had been much higher.

Kericho had been our second stop after our inaugural rendezvous at the Nakuru Town Square next to the Standard Chartered on the morning of August 22, 2012. Miguna and I were guffawing and shaking our heads in utter incredulity at the distorted media depictions of the Nakuru event.

Without much ado, please dear reader/browser/surfer/lurker/viewer, eyeball the following digital snaps from the Nakuru book launch and form your own independent opinion: 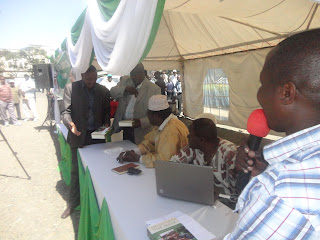 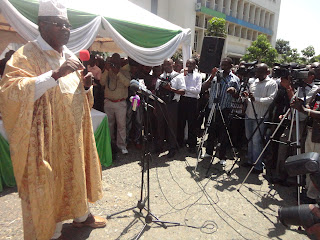 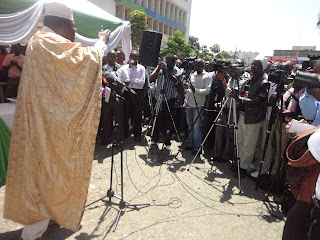 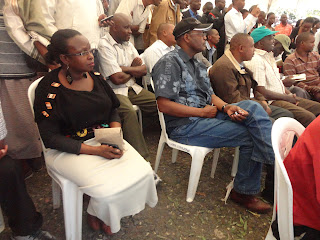 We got to Kisumu Hotel having been escorted from Awasi through Ahero to Kisumu by police officers from the two stations. As we got in, a gaggle of  youthful boda boda piki piki riders yodelled at us a stream of mild  profanities and obscenities mostly in Miguna's direction, which we ignored. Protus, the guy from Prestige Books travelling with us unfurled the nifty tarpaulin banner of Peeling Back the Mask and set up a table to display the books. To cut a long story short, our local MC, Wycliffe, having ensured the room was full, took charge of the proceedings and introduced me. In a  45 minute address in Kiswahili, I first clarified that I was NOT Onyango Oloo of  TNA before giving a political/ideological/historical background on the aspirations and angst as well the zeitgeust of the generation that people like Miguna and I came from and what motivated us to get into student activism, underground politics and exile-based campaigns to bring down the Moi-KANU  one party stat. I spoke passionately about the need to uphold the constitutionally sanctions freedoms like freedom of expression, freedom of conscience, association and so on. I hailed Miguna's book as a triumph for us all, since it encouraged those of us who had not yet done so to compose our own memoirs. I then invited Miguna to speak.

In a 90 minute address Miguna first of all thanked the people of Kisumu for welcoming him to his hometown. He spoke about growing up dirt poor; of his early travails struggling to get the fees to complete his education; his initiation into radical politics at the University of Nairobi; running foul of the repressive state; escaping to Tanzania, Swaziland and ultimately Canada. His decision to come back to Kenya; how he got involved inODM politics and how he was eventually became Raila Odinga's advisor and how Kibaki appointed him Joint Secretary, along with Kivutha Kibwana of Inter-Coalition Affairs; the rot he witnessed while working at the Office of the Prime Minister; his fall out with Raila Odinga; his decision to pen his memoirs; the launch; the lies that he had fled from justice; the fact that none of the people who threatened him law suits had stepped forward even after he came back to Kenya from his one month Canadian vacation before delving deeply into the problems of unemployment, crisis of education and general underdevelopment in Nyanza especially as these issues pertained to the youth and were aggravated by ills like corruption, tribalism, nepotism.

It at this point, towards the END of his address that a handful of youths started heckling him, disrupting the function.

To their credit the District Commissioner and two OCPDs from Kisumu and Ahero respectively tried in vain to calm down the  youths who were obviously reacting to a pre-arranged script to change the headlines of the day's function. Miguna and the rest of us adamantly REFUSED to "flee" from the baying mob. Instead we patiently waited until they had trickled completely out of the room. We later on found out that they had completed surrounded the hotel, keeping vigilance at EVERY entrance, including observing from the rooftops of the neighbouring buildings.

But like I said earlier. we did manage to leave Kisumu unscathed and we considered out mission to meet the people of Kisumu a success.

You wouldn't tell that all that happened if you were to go by the  piece of creative fiction published in the Daily Nation of Friday, August 24, 2012 would you? Calling me the TNA Secretary General when I had clearly and loudly gone to great lengths to clarify that case of common mistaken identity.  I am writing to them for a full retraction and apology.

Just read this email I received from Wycliffe the young man from Kisumu who was our local MC:


On Fri, Aug 24, 2012, Wycliffe Mboya  wrote:Dear Mr.Oloo,
My name is Wycliffe.I was and still i am the point man in Kisumu and we hosted the meeting in Kisumu Hotel.I totally don't agree with media because 90% presented are politically driven.But with TV K24 really reported the exact thing!Kisumu need"over-owl and proper tun out of good and right messages"intolerance and hooliganism should not be allowed.
My stand is that I would rather wish and want to associate myself with GREAT Leader of my time(Miguna Miguna).We don't just want good leaders but leaders who take risks in opinions and tell the truth.These leaders who are GREAT take people to where they don't want to go!where as "good leaders move with small masses"
The following day my life was threatened with unknown calling and i switched off.Miguna have my number and I wish to present myself to be part of the team.Let him (Miguna know this).
Lastly how to we pay the picture man and how to I get the pictures to you?
My number is 07xx xxx xxxx or in case you forgot give Miguna my email address and my telephone which I know he has.
Regards,
Wycliffe.

My wife just beeped me to tell me that the coast is clear for me and other in laws to make our entrance at the
funeral of her step mother.

I called my father the other day and he had all this questions about Miguna Miguna to say the least he was kinda intrigued by him. My father is a retired school teacher who would like to attend book tour but not when engulfed with violence. My suggestion is to have people who would like to attend the book signing be pre_screened in advance provide security to the premises.

fyi - The 2 Onyango Oloo's should appear on a TV show so we can all stop confusing both of you e.g The bench

A lot of interesting reading here! Too late if you haven’t joined still. But better late than never. In the western world me I am glad I joined early.
escorts stockholm