Kenya Can Still Correct Its Mistakes in Somalia


This is a follow up to my earlier my earlier digital essay on the quixotic invasion by Kenya into the territory of her north eastern neighbour.

The first big casualty of the Kenyan military foray into southern Somalia has been the truth.

Kenyan print and electronic journalists, female and male, are tumbling over each other in an insane quest to be on the front-line of regurgitating the latest doublespeak from the Kenyan propaganda machine; anxious to earn extra stripes as the most zealous zealot; the most “patriotic” parrot and the most blood thirsty member of the war mongering Kenyan fourth estate. This a point driven forcefully home by Henry Makori, a Kenyan journalist working for the widely read Pambazuka electronic social justice newsletter in a recent piece on how the Kenya is in bed with the military.

With such a fawning, sycophantic mindset the Kenyan media is hardly in a position to interrogate troubling questions raised by organizations like Human Rights Watch who have alleged that Kenyan security forces are arbitrarily detaining people as detailed in the following link.

One of the biggest lies that the Kenyan state has fed our citizens through outright military propaganda and blatant lies from the highest echelons of the political leadership including the President and the Prime Minister is that our defence forces went into Somalia to “Linda Nchi” (protect the nation) after a series of violent provocative assaults by the rag tag Al Shabaab militia.

Nothing could be further from the truth.

According to a series of revelations posted on the whistle-blowing site Wikileaks, the Kenyan authorities have been plotting their moves in Somalia for almost four years now.

For example on the 26th of January 2010, the US Assistant Secretary of Defence had separate meetings with Kenyan Prime Minister Raila Odinga, Internal Security Minister George Saitoti and Defence Minister Yusuf Haji.

Here is the summary of that document:

1. (C) Summary: During separate January 26 meetings, Assistant Secretary of Defense Alexander Vershbow met with Prime Minister Raila Odinga, Defense Minister Yussuf Haji, Chief of Defense Jeremiah Kianga, and Interior Minister George Saitoti. PM Odinga expressed serious concern over regional instability emanating from Somalia and emphasized that the international community has not acted with resolve as needed. The PM was equally concerned about the potential for Sudanese instability before and after the 2011 referendum. Minister Haji expressed his appreciation for defense cooperation and offered new details on Kenya's proposed "Jubaland Initiative" in Southern Somalia. Kenyan officials expressed concern over spillover of violence from Somalia and the flow of Somali refugees into Kenya."

Click here to read more about what they discussed.

We are further informed that:

Details of that meeting are available here.

As far back as December 8, 2009 according to Wikileaks,

"During a meeting on the margins of the Djibouti IGAD ministerial visiting US Deputy Assistant Secretary Wycoff and Kenyan Minister of Foreign Affairs Wetangula agreed to continue to work together to promote stability and political reconciliation in Somalia. DAS Wycoff told Wetangula that the USG continued to strongly oppose the Kenyan "Jubaland" initiative as a bad idea that would more likely add to Somalia's instability than to help stabilize the country. Wetangula defended GOK plans to pursue its Jubaland (southern Somalia) initiative, implied that it was in evolving concept, and offered to facilitate better USG understanding of Kenya's plans. He also urged, as he had in interventions at the ministerial, international community support for the Somalia Transitional Federal Government (TFG). Wycoff agreed and highlighted the importance of supporting the Djibouti Peace Process (DPP) and efforts to promote political reconciliation. When the subject was raised, Wetangula excluded further expansion of the teeming Dadaab refugee camp in northeastern Kenya, which he said had received 12,000 refugees in November. The Foreign Minister took a hard line on Eritrea. He told DAS Wycoff that he had rebuffed efforts by the visiting Eritrean Foreign Minister to solicit support for a new Somalia reconciliation process. The Kenyan government had expelled Eritrean diplomats that Wetangula thought had played a role in the mid-September suicide bombing attack on AMISOM in Mogadishu."

More ominously, Wikileaks informs us that

"A high-level Kenyan delegation headed by Foreign Minister Wetangula used a long January 30 meeting on the margins of the AU Summit to lobby Assistant Secretary for African Affairs Johnnie Carson's support for the GOK's long-incubating Lower Juba initiative. Wetangula, the Minister of Defense, the Director of the National Security and Intelligence Services, and the military's chief-of-staff each in turn highlighted the dangers to Kenya emanating from Somalia and advertised an incursion into Somalia by the roughly two thousand Somali forces currently being trained by the GOK as the best solution. The Kenyan delegation assured A/S Carson that both Somalia's Transitional Federal Government (TFG) and the Government of Ethiopia supported Kenya's efforts and insisted that A/S Carson's longstanding concerns about the Kenyan plan had all been addressed. 2. (C) Summary and comment continued: A/S Carson tactfully, but categorically refused the Kenyan delegation's attempts to enlist USG support for their effort. He worried that the Lower Juba initiative could be very expensive, that it could catalyze clan and sub-clan rivalries, that success could create a rival to the TFG, that the GOK could be unwittingly providing training to future or current ONLF members, and that the GOK was not prepared to handle the domestic repercussions should their effort fail. The January 30 meeting marked Wetangula's third attempt to enlist A/S Carson's support and was only the latest in a long-running campaign by the Kenyan government to win USG agreement to its initiative. The persistence with which the GOK is courting the USG suggests, if nothing else, that they have finally awakened to the implications for Kenya of long-term instability in Somalia and are attempting belatedly to address the problem."

If you want to download the cable in its entirety go to this site.

Even without prior knowledge of these now exposed Kenyan government top secrets, many people-Kenyan and non Kenyan- were quick to denounce this misadventure.

This writer was among the very first to come out publicly to express disquiet with Operation Linda Nchi.

A group of Kenyan writers and public intellectuals issued a statement carried in the Africa Report expressing their opposition to the war.

Another Kenyan, the young upcoming writer S. Abdi Sheikh, who hails from the northern Kenyan town of Wajir did an analytical piece for Somali Point which you can access at this link. Abdirahman Hassan Tammam published his opinion in the same publication at around the same time as did Michael Weinstein.

A Ghanaian pundit, Kweku Osei, weighed in with this interesting perspective; while Zimbabwean commentator Tendai Marima, used the Aljazeera platform to say this.

The influential, subscriber based electronic newsletter Africa Confidential carried a series of well-researched articles featuring interviews and hard nosed assessments. Click here to see the first article; go to this link to access the second one and to access the third article press here.

From the United States, Jeremy Scahill composed a very compelling essay published in one of that country's most progressive publications while here in Nairobi his compatriot Andrew Franklin, an ex-Marine who is now a financial consultant in the Kenyan capital did an opinion piece for the Business Daily.

From the viewpoint of a Somali national, I think that Prof. Abdi Ismail Samatar's analysis and proactive proposals are among the most far reaching.

This is a view echoed by Ali Dirshe, the President of the Somali Canadian Diaspora Alliance. 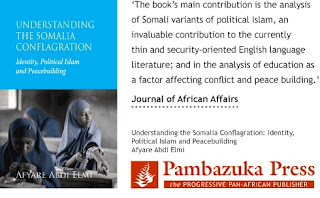 I consider it essential reading for ANYONE who wishes to understand in depth what is going within the depths of that complex conflicted Horn of Africa nation. I recommend to all Kenyans- especially those who are quick to wrap themselves in the Kenyan national flag and trumpet their jingoism through earnest ring tones on their cell phones based on the tune of the country's national anthem. Of particular interest should be Chapter 6: "The Role of Regional Countries and Organizations in the Somali Conflict"; Chapter 2:" Understanding the Sources of Somali Conflict"; Chapter 5:" Understanding the US Policy toward Somalia" and Chapter 4:" Making Sense of Islam and Islamic Awakening in Somalia".

The Kenya government continues to make unforced errors in relation to Somalia. Let me list a few of those mistakes:

1. It is morally, politically and militarily wrong for Kenya to invade Somalia- a neighbouring African state.
2. It is reprehensible for the Kenyan government to LIE so brazenly to its own citizens about its real reasons for invading Somalia.
3. It is against the Kenyan constitution for the Kenyan government through its security forces to violate the human rights of its citizens and those of a neighbouring country, especially defenceless civilians under the veneer and using the canard of allegedly defending itself from Al Shabaab.
4. It is dangerous for Kenya to retreat from its laudable foreign policy based on respect and peacebuilding to embrace this reckless quixotic misadventure.
5. It is unwise for the Kenyan government to allow itself to be a pawn, a puppet and a tool for US led imperialist aggression in Africa.
6. It is foolhardy for top Kenyan leaders-including Prime Minister Raila Odinga and President Mwai Kibaki to go globetrotting, especially to Israel which alienates so many peaceloving people, and especially Muslims to seek military, intelligence, financial and other support to ratchet up its conflict against real or perceived enemies in Somalia and within the country.

What some may ask, should the Kenya government do?

Well I have a few suggestions:

(a) Immediately withdraw all Kenyan troops from the territory of Somalia;
(b) Seek peaceful solutions to the Somali conflagration by acknowleding that it is the Somali people-within and outside the country-especially the civic formations who must take the lead in ending the conflict in that Horn of Africa nation and state;
(c) Delink itself totally from the machinations of the US through Africom;
(d) Recognize the authority and the legitimacy of the African Union in leading regional, continental and international efforts in restoring peace and national harmony in Somalia;
(e) Giving up the outlandish fantasy of annexing parts of Somalia and creating buffer zones like the proposed "Republic of Jubaland";
(f) Deepening thorough socio-economic reforms in Kenya, especially by tackling the endemic youth unemployment which is by far the biggest attractor of past, present and future Kenyan born Al Shabaab militia militants;
(g) Encouraging the flourishing of a free and independent Kenyan media, that instead of joyfully donning military elements, flak jackets and bullet proof vests, will instead carry out thorough research, hold the military propagandists to account, speak truth to the chest thumping political mandarins and inform the Kenyan citizenry with facts rather than DOD press releases;
(i) Investigate and prosecute all cases and instances of human rights abuses carried out by the Kenyan police, paramilitary, armed forces and of course Al Shabaab and their supporters whether these violations have occurred on Kenyan territory or within the boundaries of Somalia.

I could go on and on for about fourteen other pages, but I guess I will stop here for today.

Great post. Kenya can still correct its mistakes and get back to the right path.

This is for all those people in darkness. Great article. Our govt is wasting money in the Somali war wile our mothers continue to suffer due to economical crisis instead of using the money to feed the hungry. USA was there and the Al shabaab defeated them. Who are we then to defeat them?