Kenyans on the Threshold of a New Constitutional Democratic Order 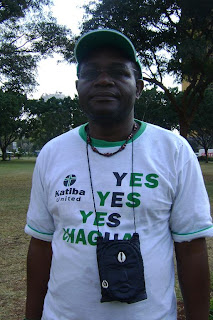 Judging by the images, the sounds and the spectacle at the YES rally in Nairobi on Sunday, August 1, 2010, one can deduce that a big section of Kenyans are very fired up about the Proposed Constitution.

One just hopes that they also remember to wake up on August 4th to actually vote:

The exuberance of Sunday's monster rally was merely amplifying the electricity I felt on the street when I participated in the Warembo Ni YES procession and rally two days earlier: 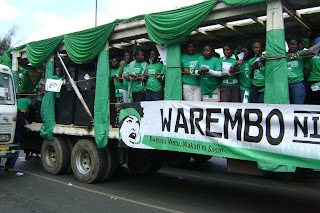 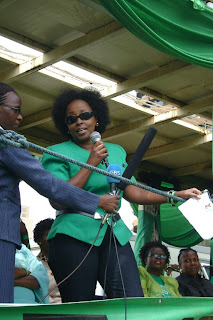 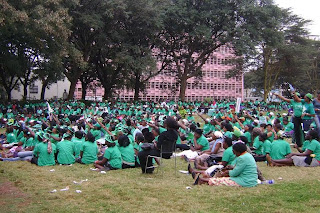 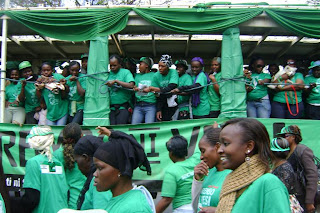 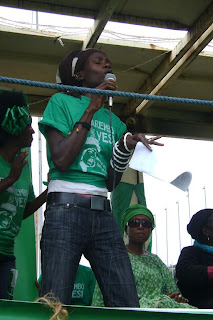 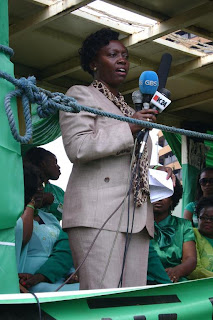 If, as projected by at least four different opinion polls, the YES side prevails as victorious at the August 4, 2010 Referendum on the Proposed Constitution, Kenyans will have carved an important milestone on the tortuous and meandering odyssey in the long quest for a new, just and democratic order in East Africa’s most vibrant economy.

Far from being a document cobbled together by a motley crew of so called “constitutional experts”, the document Kenyans are voting on is a result of decades of peaceful and persistent agitation, propaganda, mobilization by a relay of generations of democratic patriots past and present. Perhaps one of the most poignant reminders of these years of self-less sacrifice was illustrated recently when about forty former detainees, political prisoners, victims of repression and survivors of torture converged at the residence of one of their own colleagues- Raila Odinga, the Prime Minister.

Many of those present first became involved in the struggle when they were in their early twenties and did so at a time when the forces of state repression-during the Kenyatta and Moi regimes- were quite ruthless in crushing any perceived dissent. Now here they were, in the graying middle age, wishing a speedy recovery and paying homage to the Prime Minister who had gone through more than his own fair share of travails and tribulations.

But as an indicator of how far Kenyans have come on the journey for constitutional change, the question of democratic reforms has become mainstreamed to an extent that could have been barely imagined by most Kenyans only a few years ago.

A few days ago, the Kenyan Association of Manufacturers put out full page ads in the leading newspapers endorsing the Proposed Constitution. In a break with the long held “apolitical” stance, members of Kenya’s South Asian communities, including the Kenya Asian Forum and Sikhs for YES, have been very vocal and public about their enthusiastic embrace of the draft. Prominent Nairobi businesswoman Esther Passaris, used her leverage as the CEO of the street billboards firm Adopt- A-Light to erect giant endorsements for the proposed constitution featuring prominent Kenyan women like herself, Martha Karua, Wangari Maathai and the Warembo Ni Yes, women’s advocacy group. The same ads were carried in the Star newspaper on the last day of July. Muslims are overwhelmingly rooting for the YES campaign as can be evidenced in the full page ad by the National Muslim Leaders Forum placed on page 5 of the August 2nd edition of the Standard and elsewhere. Even the Christians who have several of their main leaders at the heart of the NO campaign are divided, with many of the rank and file Christians breaking ranks with their Cardinals, Bishops, Reverends, Priests and Pastors to join the YES side.

What is one to make of this unprecedented national consensus that brings together militant socialist anti-imperialists with die hard capitalist manufacturers; Christians with Muslims, men with women; young with old; supporters of PNU with those of ODM and other political factions?

One can posit that Kenyans just want to GET IT RIGHT this time around as far as the questions of Governance are concerned.

There have been at least three false starts since NARC ended KANU’s political hegemony in December 2002:

First and foremost, the failure (or is it refusal) of the first Kibaki administration to promulgate a new constitution, thus jettisoning a key plank of its election platform. Secondly, the rejection of the called Wako Draft at the 2005 Referendum exposed very deep fissures in the national firmament. Thirdly, the explosion of post-election violence in the aftermath of the hotly disputed Presidential results at the tail end of 2007 almost brought the country to a civil war melt down. These three moments in our contemporary history made us angry, frustrated, fractious and very fearful of our future development as a nation of diverse communities growing together in peace and harmony.

Thus the August 4th Referendum provides an opportunity for the Kenyan people to expiate these “sins” and “crimes” of omission and/or commission; this is a rare chance to exorcise the demons and ghosts of yesteryear; it is an investment in and a build up from the renewed hopes and sense of optimism that the nation experienced following the signing of the National Accord in February 2008 and the setting up of the Grand Coalition Government bringing together former fierce adversaries turned consulting Co-Principals Prime Minister Raila Odinga and President Mwai Kibaki.

The formidable might and clout of the YES team underscores a fundamental reality of Kenyan politics:

When Mwai Kibaki works in tandem with Raila Odinga, all other political players are reduced to local Lilliputians wallowing in the shadows of near irrelevance.

Almost as a godsend, former President Moi decided to throw his weight behind the NO campaign thus installing tagging all the campaigners against the Proposed Constitution with the contagion of misrule, dictatorship, corruption, patronage appointments, land grabbing, torture and state terror that many Kenyans associate with the KANU rule that started with founding President Jomo Kenyatta and ended with ignominious defeat of Moi’s hand picked successor at 2002 elections when NARC, Kibaki and Raila came out on top.

The credibility and moral authority of those at the helm of the NO side, especially the Christian clerics hinges on the outcome of the August 4th plebiscite. Unless they defy the pollsters and conventional wisdom and come out on top the leaders of the Catholic Church and several Protestant groupings risk unleashing a backlash of leadership credibility if their folk ignore their sermons and admonitions and vote for the Proposed Constitution.

Both the YES and NO sides are in full agreement over one thing:

The proposed constitution has some obvious flaws that need to be addressed after August 4th.
Many in the YES campaign believe that large chunks of the proposed constitution are a gross mutilation of the original harmonized draft as well as a distinct departure from the Bomas Draft that had provisions for a parliamentary system and a more thorough three tier devolutionary model featuring a full fledged autonomous regional structure.

Some of these observers are convinced that the Proposed Constitution is in itself a TRANSITIONAL document that has to be reworked and infused with more progressive democratic content.

Given the obvious misgivings of the NO side with the draft, there is, ironically enough ground with their antagonists and YES drum beaters for the same document for renegotiating some of the aspects of the Proposed Constitution in the sense that there could be another chapter of deepening the constitutional review process post the Referendum.

What path these contestations, negotiations and realignments take will be determined, in the final analysis by the relative political strength and unity of the YES and NO forces on the ground in the coming weeks and months.