Crisis Intensifies at the TJRC 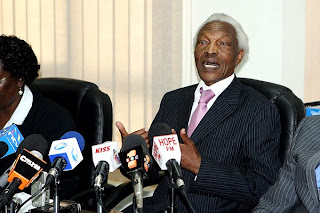 Some Observations from Onyango Oloo

The afternoon of Tuesday, April 13, 2010 is one that the commissioners and staff at the Truth, Justice and Reconciliation Commission are not about to forget in a hurry.

This was the afternoon when a scheduled press conference had been convened at the 3rd floor, Delta House offices, located off Waiyaki Way in the Westlands suburbs of Nairobi.

I was there, along with other denizens of the Fourth Estate- this time wearing my media hat as a representative of News Xtra the new free, Kenyan daily evening paper that is just starting up.

On arrival, I found a battery of television, radio and print journalists hovering before the locked doors, even as various commissioners flitted in and out in preparation for the media briefing.

Soon the doors were flung open and we dashed in- a horde of humans stampeding across this concrete urban Mara while simultaneously hoping to smash Usain Bolt’s sprint records. After the usual scramble to arrange and rearrange the microphones and heavy duty broadcast cameras, we were set.

Ambassador Bethuel Kiplagat took charge and without reading from the prepared statement briefed the media that all the nine commissioners had unanimously decided the previous day to write to Justice Minister Mutula Kilonzo requesting the setting up of a tribunal to probe the serious allegations against the TJRC Chair in relation to acquisition of land and real estate; involvement in the Wagalla Massacre; questions around the death of former Foreign Minister Robert Ouko and participation in the Moi regime.

He then abruptly left his chair, announcing that he would not be taking any questions. Which of course did nothing to stem the barrage of strident, even angry inquiries from the assembled reporters. In the ensuing confusion, another commissioner, Berhanu Dinka from neighbouring Ethiopia, fielded some of the questions.

Would Ambassador Kiplagat be resigning as TJRC Chair?

Were the Commissioners united or divided?

Why did TJRC CEO Patricia Nyaundi walk out just before the press conference?

Why hobble taxpayers with a greater financial burden with this tribunal?

Is the TJRC able to function and deliver its mandate given the controversies swirling around the commission?

You could have hacked the tension in that TJRC board room with a panga.

As Mr. Dinka was in the process of attempting to answer some of the above questions, Ambassador Kiplagat came back and resumed his position at the table and started answering some of the questions!

No, he would not be resigning because he was not guilty of the allegations leveled against him and he wanted the rule of the law to be followed to the letter.

Yes, he would be stepping aside if the tribunal was set up because according to the TJRC Act, he cannot remain in office while his conduct was being probed.

Other commissioners chipped in, but I remember former Vice-Chair Betty Kaari Murungi unleashing a terse no comment when she was invited to speak by the media.

Another commissioner, Ahmed Farrah from Kenya moved to reassure the journalists that all the commissioners had signed the letter to Mr. Mutula Kilonzo and that there was no division among their ranks.

Abruptly, the press conference ended-in disarray in my opinion with many of the journalists grumbling in obvious disgruntlement with one woman reporter saying loudly that the healing and reconciliation should begin within the TJRC itself.

And there I was, shaking my head in befuddlement.

I find myself in the unique position of being a former political prisoner and active social justice campaigner who is on good terms with many of the commissioners as well as the staff people at the TJRC. I have met and conversed with Ambassador Bethuel Kiplagat on numerous occasions throughout this controversy around his continued stay at the helm of the commission. I am very familiar with his positions and where he is coming from. It is not a secret that I have become a virtual pariah within certain civil society circles as a result of some of my public interventions-which I will not rehash today.

At the same time, people like Ms. Betty Kaari Murungi are comrades of mine from a long time ago and I have also discussed and consulted with her about her perspectives on the way forward. This I have done openly and on at least one occasion I have been the emissary between Ambassador Kiplagat and his former Vice-Chair when things were particularly tense between them- that is before she stepped down.

Yesterday I managed to speak to both of them.

When the TJRC Chair called me after I had left the press conference, I was very blunt with him. I told him that in my opinion, it was a mistake for him to have chaired the press conference whose main purpose was to announce that a letter had been written to the Justice minister- with a direct implication that he would stepping aside temporarily as the tribunal probed his conduct. I also informed him that I had spoken to some people at the Commission- both staff and commissioners who were quite upset at the turn of events.

What I owe to myself, my comrades and readers is my usual honest candour.

I have maintained that the way we as civil society have handled the TJRC matter has been wanting. I have kept a critical engagement with the besieged Chair in the course of which I have earned his trust and respect, and I believe it has been reciprocated.

I therefore want to address myself to my core constituency in the human rights and progressive community as well as the folks at the TJRC including Ambassador Bethuel Kiplagat:

2. In my conversations with at least one commissioner and some other people at the TJRC, several of the stakeholders within the TJRC feel betrayed by some of the actions of the Chair, Ambassador Kiplagat in regards to how the press conference was conducted. It is my understanding that Commissioner Berhanu Dinka was supposed to preside over the press briefing and field the questions. It is my further understanding that the TJRC Chair was supposed to comply with the unanimous decision of the commissioners that he would step aside once the tribunal was set up. Even though he did say that eventually at the press conference, it sounded contradictory to his earlier assertion that he would NOT be resigning.

3. I am made to understand that at least two commissioners and one staff person are seriously considering quitting altogether from the commission if the TJRC crisis is not resolved forthwith.

4. While I understand the pressures, tensions and insinuations that have bogged down Ambassador Kiplagat- and having spoken to him, I am largely convinced that he is INNOCENT of the serious charges leveled against him- especially as regards Ouko and Wagalla- I think that yesterday’s press conference did not do anything to help his case, cause or course. If I were him, I would take immediate steps to undo the damage done at the press conference. If this does not happen, there may be a scenario that he is left presiding over a commission without half of its commissioners and some of its key staff.

5. From a victim’s/survivors’ perspective, I remain convinced that the TJRC, even in its current form, composition and structure is VITAL in the quest for seeking truth, dispensing justice and laying the groundwork for healing and reconciliation. In my ongoing work with the National Victims Network, whose National Convener is Wachira Waheire and Chairperson is Wafula Buke-both former political prisoners and torture survivors- we have fore grounded the need for the TJRC to be victim centred and victim-based. Those of us who are currently critically engaged with the TJRC process have strongly grounded principles, values and ethics- some of which has pitted us against some of our own lifelong comrades, but all of which are predicated on social justice. I support the TJRC and will continue to do so while at the same time insisting that none of the controversies can be or should be swept under the carpet. In this connection I have sought and secured an audience with both Ambassador Kiplagat and Ms. Betty Kaari Murungi so that, face to face we can dialogue further on this as I try to contribute to a way forward.