A Dispatch from Porto Alegre, Brazil

I arrived in Brazil on January 24th via Johannesburg aboard a South Africa Airways flight which deposited us- we are here with at least two Kenyan colleagues, Catherine Wanjiku of Radio Koch, a community based radio station serving the informal settlement of Korogocho in Nairobi and

Moses Shaha who as the regional Secretary for The Eastern and Southern African Small Scale Farmers Forum (ESAFF) is coordinating a an activist network of small farmers from his base in Kilifi- first in the Sao Paolo megapolis before we got a connecting flight to Porto Alegre. 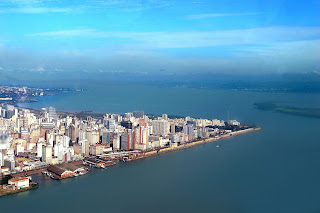 This city which is the capital of the southern most Brazilian region (equivalent to a Kenyan province) of Rio Grande do Sul was the birth place of the World Social Forum hosting the very first event way back in 2001.

Porto Alegre is the city where 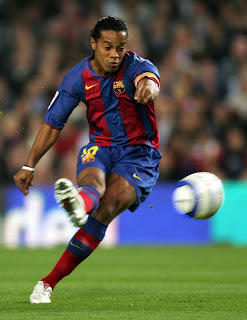 Ronaldinho, the famous soccer dribbling magician who now plies his trade in the Italian fashion capital of Milan, was born and raised. Rio Grande do Sul is also the regional home of Dunga (I do not know if Brazilians know that in Kiswahili “dunga” means to stab; but I understand it was his Portuguese nickname after "Dopey" one of the Seven Dwarfs in the familiar fairy tale- although his real name is Carlos Caetano Bledorn Verri), the current coach and former international star.

This year the organizers of the global event that brings together social movements and other progressive left wing tendencies and causes has embarked on a twelve month celebration of the WSF process which kicks off here in Porto Alegre this January and concludes with another global forum in Dakar, Senegal, West Africa in January 2011.

I am in Brazil courtesy of an official invitation from the Paulo Freire Institute and the Ciranda progressive news network.

But that is not what I want to talk about.

I want to share with you something that happened in the afternoon, evening actually.

The highlight of each opening day of the World Social Forum is the MARCH- a procession and celebration of the power of social movements, progressive politics and militant causes snaking through the streets.

It is a direct counterpoint juxtaposed against the heavily fortified, closed door cloistered affair of the World Economic Forum in Davos, Switzerland, an event which unfolds simultaneously with the World Social Forum.

On the other hand during the World Social Forum, whether it was in Kenya, Guinea, Pakistan, Venezuela, India, Brazil or Senegal you have the globalization of solidarity, the internationalization of social justice, the universality of gender equity and the shared dreams of world peace and a planet without nuclear weapons.

Yesterday was no different.

Brazil is a vibrant society, brimming with a diversity of peoples, not least of whom is the largest single bloc of Black people outside the African continent- a legacy of the Transatlantic Slave Trade and the demands of primitive accumulation and mercantile capitalism over the centuries.

In Brazil you will find powerful trade unions- there are at least three major trade union confederations- CUT, 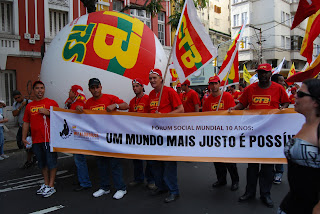 CBT, UGT all linked to left leaning political parties from the communists to the social democrats.

Speaking of political parties there is a whole range on the ideological spectrum.

MST, the landless peoples movement is probably one of the largest and most organized social movements in the whole world.

Women's groups are deeply rooted and have contributed to democratizing Brazil and deepening the culture of social transformation in the country.

Long before climate change become a buzzword on CNN and BBC, the environmental groups in Brazil had for decades been warning the world about the devastation of the rain foreests and the dire consequences for the ecosystem, climate change and the sustainability of the human species on this endangered planet.

Yesterday all of this was on display, alive, moving and bobbing, weaving its militant, optimistic path across the avenidas of Porto Alegre.

One could see the fusion of political action, social justice fervour with art, with culture through the booming music from the giant speakers atop the big trucks hired by the workers movements; 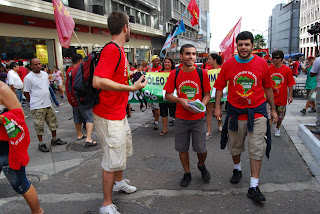 through the vociferous chants 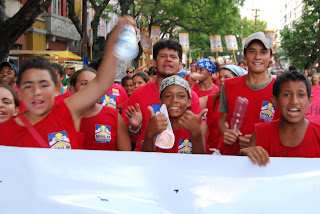 of teenage high school students demanding the democratization of education and denouncing the privatization of academic access; one could witness 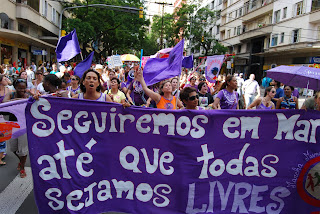 it in the vigorous samba moves of the women clamouring for gender equality and hear it in the beautiful songs of transgendered, gay, 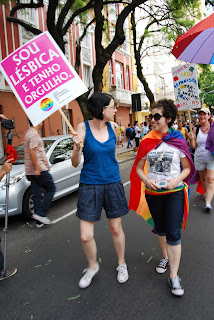 lesbian, bisexual and intersexed Brazilian people waving their banners and feel it in the rhythms of the zonked out campaigners who were arguing that marijuana should be legalized because it was NATURAL, unlike the toxic concoctions trapped in Coca Cola bottles.

I could sense the triumph of social movements and progressive forces for having over the years, liberated the streets and spaces of Porto Alegre- a city where the political leadership not just at the municipal, regional and but even federal level , saw that it was in their economic, social, cultural, commercial and even ideological interests to embrace the spirit of the World Social Forum which made sense even at the BUSINESS level.

Porto Alegre is a city where events like the Opening March of the World Social is an opportunity for the police and security contingents to showcase their skills in marshalling trafffic and providing legal protection for constitutionally guaranteed democratic rights like freedom of assembly, freedom of movement, freedom of association, freedom of expression and freedom of conscience.

Porto Alegre is a city very much UNLIKE Nairobi where barely a fortnight ago I witnessed heavily armed cops unleash tear gas and live bullets on peaceful protestors in the heart of the Kenyan capital downtown hub.

I could go on and on and on yammering and jabbering about Porto Alegre this, Brazil that, but as the clichê goes, an image is more valuable than a bouquet of words. 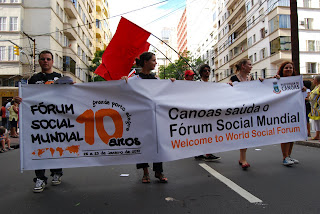 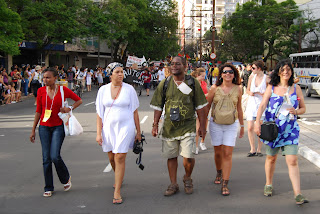 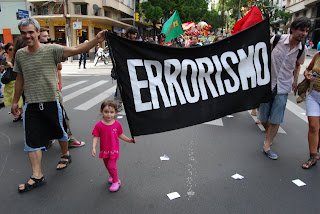 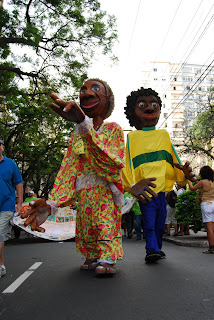 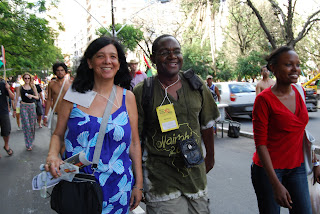 Posted by Kenya Democracy Project at 2:34 AM