Will The Digo Lead Coasterian Revolt?

1.0. The Wondrous Spectacle at the Vatican

was buried earlier today and everyone was there.

As a communist, I have a lot of things (not necessarily trance induced, delirious ululations) I could mutter about the just expired John Paul II, but just this once I will hold my tongue in deference to those millions of grieving Christians around the world (and yes, my born again fiance is way high up on that list of wahonoki and waumini). I will just say in passing that it may be of interest if we reminded ourselves of the role of the right wing Opus Dei organization in the ascendancy to the papacy of the late Polish cardinal. When I arrived in Toronto slightly after six thirty on this Friday evening, I picked up a copy of the NOW weekly and was fascinated by this particular article.

Interestingly enough, a cardinal in Cape Town with a very Ghanaian sounding name is considered among the dark horse papabiles... although it is considered highly unlikely that the Vatican is ready for an African, American or French pope, with the Latin Americans running in strong contention.

Here are some of the aging Catholic MEN who could be pope:


Giovanni Battista Re, 71, cardinal of the Roman Curia at the Vatican

Camillo Ruini, 74, member of the Roman Curia at the Vatican 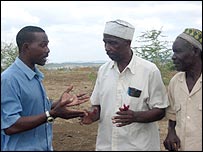 Very few Kenyan political pundits have grappled with unravelling developments in the forests of Kwale district which has seen the retired Major younger brother of Foreign Affairs minister Ali Chirau Mwakwere nabbed as the trainer and key mastermind.

A Mombasa based stringer for the BBC has given a deeper account of the so called "Republican Council", an account that goes beyond the sensational headlines of the last couple of weeks.

and this next one has kept us on the edge of our virtual seats, hankering for more, more, more!

The Kenya government through the police spokespeople have tried to contain the incident as a criminal occurence that will be stifled in court and presumably stiff prison sentences later.

I would like to suggest that this is a very NAIVE and MYOPIC approach by the Kibaki government, especially when we consider that one of the key members of the cabinet, Mwakwere himself struck a major discordant note, sticking up to members of his Digo support base and decrying harassment of innocent peasants by overzealous askaris.

There is a LOT OF RESENTMENT against the central government by the people of the Coast Province and this sense of anger and frustration cuts across tribe, religion and political affiliation. That is why you see the ambivalent legacy of a blood-thirsty criminal war lord like the late Karisa Maitha, being lionized as one of the stalwart champions of the Wapwani in their face off with Wabara. That is one of the reasons why you saw loyal NAK lap dogs like Danson Mungatana campaign against BOTH NARC candidates(NAK and LDP) to try and make a bid for a "local" candidate not sponsored either by the Murungaru faction or the Raila faction of the ruling coalition.

A very, very good friend of mine from the Swahili community, someone with whom we have close family friendships going back to several years, not just here in Canada but in Mombasa as well, recently forwarded to me an opinion piece he had posted on the Mjadala forum. I am reposting the entire text of his piece verbatim, while leaving out his names:

. altough it has touched on up coutry people. please don't be annoyed by it.
xxxxxxxxxxxxx
Let's face it: The recent visit of President Kibaki to Garsen, Coast to officialy
open the tana irrigation scheme http://www.eastandard.net/hm_news/news.php?articleid=8742 was not in our intrest(we people from coast). What was heralded to be development of agriculture or an opportunity for us to improve our lives was exploded by upcountry people in order to exploit us..

If we are to be true benefactor of the project, why did n't the government took the
best intrest of the native people in the area i.e oromos, swahilis and pokomos who
will be very much affected by the project, there must be a lacal commuty seal of
approval on the yet-to-be-proven irrigation scheme, which, by the strange logic of
Nairobi, is not directed to benefit the local area but benefit people mostly from
upcountry.

First and for most The idear of irrigation schemes is a failed approach, atleat in
coast province, Witness the Bura irrigation scheme, Hola (Galole) irrigation scheme
Ramisi Plantation, the sisal at Vipingo which is in it's way out and the list
continues. the indifference to pending environmental calamity which might be caused
by the distruction of our wet land in the Tana delta and deprivation of grazing land
to our people who are mostly pastrolist(am talking of oromos). What's the logic of
immersing ourselves in a scheme that only perpetuates self destruction and
marginalise our peple further.

If Nairobi is realy intrested in developing agriculture in Coast, why cant it
establish reseach institutions or introduce reseach in the current agricultural
institution to develope our coconut trees and cashew nuts which to us is what coffee
and tea is to upcountry people. There has been never reserch done to develop the
former crops why? everybody knows if you go to Walmart you will find a kilo of
cashew nuts more expensive than a kilo of coffee, but Nairobi is less intrested in
marketing cashws. as a result the cashews factory at kilifi is almost dead now. why?

If the Government of Kenya realy want to improve our life style, why not protect our
existing livelyhood. Why Cant it protect our shore line from over fishing by Korean
trawlers. From Kiunga to Shimoni these trawlers have been operating without
contrals, such that fishing is no longer worth while to local people, Not to mention
the distruction of eco-systems in our teritioal waters.

Tourism is the leading foreign exchange earner for Kenya, seventy 70 % of tourist
beds are in coast province. Why cant we peple of coast get a fare share of the
benefits. Why did The government for instance built Kenya Utalli College in Nairobi
Where most of application facilities for training Tourism students are in Coast. Why
is that only a few number of students from coast are given the chance to sturdy in
that college. During my time as a student in that institution for instance we were
only five student from coast province in a population of more 500, why? Coinsidence
eh!

Take for example the Kilindini port, almost al the top managment are peple from up
country. It's heart wrenching to see people like Capt. Odach from the shore of lake
victoria to come mombasa and become the chief pilot of the port, why not a local
person? I once travelled by rail from mombasa to Nairobi i could not see a single
person who is a coasterian at the railway station, not even a cleaner.

The government of Kenya took over Meome now Mombasa polytechnics, i remember to have
visisted the institution some time in 2000 and all i could here was aterere, yamune,
omera and the likes, meaning almost all the studedents were from up country. The
goverment has not build a single intitution of higher learning in our province not a
university, not a college from the time of indipendence upto now and yet the few
available ones are swamed by the upcountry people, why?

It's time we coasterians asses our association with the rest of Kenya.This should
not impinge on maintaining good relations with the rest of country nor demand
indipendence from it but rather demand federalism. the time is now.

Why? To begin with, such a decision will be in full accord with the deep feelings of
most Coasterian that our region set its own course in the issues that affect us and
use our energy and imagination to develope our community.

What's more. It would relieve the fractiousness that the issue of maginailization
now generates. It would put Coast in a position to speak forcefully and with
credibility on issues that affects us, our enviroment and resources. It would set
the stage for a clear-headed rethink of our regional relations.

The issue that what will happen if the government impose embargo on agricultural
goods coming to coast is out of the question, The reality is that the country
economy is increasingly reliant on us. however vengeful,the leaders from the rest of
the country are, they are not going to put to risk loosing connection with us.

How do we achieve our goal?First and fore most it's time we elect proper politicians and not wannabees or ilitrate people. We need to elect educated people who can speak their mind and not with cowerdice like kina shariff, zaeem(said Hemed)and the like. people who can talk passionatly without fear.Even balala I never thought he is just povu la mkojo bubling at first only to disappear when you finish peeing.

Secondly we need to sensitise our people on the need to self determination. If we
want to demonstrate added commitment then there are other initiatives. More
relevant actions that can be taken. We should be able to put our foot down and say
NO! to things that are imposed to us like the Tana Delta irrigation scheme.

Thirdly we should put pressure to our current MPs to be aggressive enough in
advancing our interests at the national level. Kibaki is placed in a political
pickle by his NARC government, as such he should not be dismissive and arrogant to
our people the way he reacted to the local commuty of Tana Delta at Garsen, noth
coarst. when he told them. "Acheni fitina, siyo kazi yenu kupitisha hiyo, kazi yenu
ni kufuga na kulima. Hiyo imeshapitishwa kitambo na sukari italimwa tu,"

In short, a decision to say No to issues that are not good for us would translate
into a resounding Yes to the kind of development our community needs. The time is
now

I have seen similar sentiments posted by Wadawida writing in Mashada and other Kenyans from the Mijikenda community-suggesting that if something is not done soon, the Coast Province of Kenya may be up in flames.

Of course the situation on the ground is extremely complex and fluid and there are a lot of competing micronationalisms and long simmering intra-community conflicts all over the province.

I tried to examine this phenomenon very closely in an essay I called the The Ujinga of Ethnic Particularism.

At the very immediate basis, I think that the dithering in the passage of the long promised Katiba is at the core of jittery nerves-precisely because this widely discussed draft document included chapters on the devolution of powers and local control of resources like tourism, minerals etc.

As Nairobi politicians haggle over the PM portfolio and muse over a vice-presidential flag, Kenyans may witness the beginnings of a hostile breakaway province-and as we know from history, secessionist movements are rarely quelled by mere police action in and of itself.

Kenyans should wake up and smell then kahawa brewing all over Pwani...

Onyango Oloo
Toronto
Posted by Kenya Democracy Project at 7:21 AM