Click Here to Listen to an Excerpt of the July 14th, DUNIA Show on CKUT 90.3 FM in Montreal

Today, in July 2004, merely a year and a half after those delirious UNBWOGABLE celebrations of Yote Yawezekana Bila Moi...


Press Here to Remind Yourself of That Song, in Case You Have Forgotten It 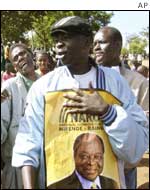 We notice we STILL DO NOT have the Katiba we were hankering for.

Today, as we remember December 30, 2002 and the broken promises

We still fight for democracy and justice in Kenya;

We still struggle for for workers' rights


we rail against corruption and bad government; we hanker for social jusitce and national harmony.

While we do that, let us keep in mind a simple grim and sobering FACT:

ALLthese struggles for self-determination in Kenya, Burkina Faso, Nepal,Antigua,Catalonia, New Caledonia, Kampuchea, the Koreas, Bermuda,Belarus and Slovakia will be rendered irrelevant if the power maniacs misruling the United States unleashed some of Unlce Sam's weapons of thermonuclear mass destruction in some vengeful insane assault on democracy, social justice and human progress ANYWHERE in the world.


If you read the manifesto that has inpired Bush, Cheney, Rumsfeld,Condoleeza and Wolfowitz, then you realize that this danger is not such a FAR FETCHED concept after all:

All Kenyan democrats,indeed all social justice activists and every person who works for progress and sustainable development in the world must strive, network and participate in the international movement for global peace.

The racist, neocolonial and illegal bloody and violent war of invasion,

plunder and conquest of Iraq is not just an outrage perpetrated against Iraqi, Arab, Muslim and Middle Eastern peoples- it is an assault against all progressive humankind; it is an attack on cherished American values of freedom and liberty and it mocks the genteel pretensions of the British that they are a civilized society.


Today there is not too much dispute that George W Bush and his British
sidekick Tony Blair, their associates and allies inside and outside
govenment,

deliberately and cynically fabricated all these hoary allegations
concerning the mythical presence of WMDs in Iraq as the excuse to turf
out their former messenger and contracted killer Saddam Hussein,
decades after using him to undermine the sovereignty of countries like
Iran, turning a blind eye to his brutal torture of his own people, even
arming him to kill his own ethnic and religious minorities. There were
no weapons of mass destruction. More than a year after Bush’s crass
stunt and shameless photo opportunity declaring that the “Mission” had
been accomplished, more than 17,000 Iraqis are dead, thousands more
maimed and injuered together with over 800 American troops. And this in not even the entire toll.

This bloody occupation has been opposed and resisted by people around the world: 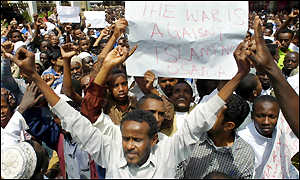 There is an article on the Guerrilla News Network site that detailed the rising suicide rates among American troops in Iraq.


It will take years before the world fathoms the extent of the environmental and health hazards wrought by the depleted uranium that is currently being dumped all over Iraq.

We are putting together this multi-media presentation drawn from different sources
that talks about the horror of war and the global resistance against the military conflict in Iraq, done by people passionate about world peace.

"Remind Us" is piece that captures, with such eloquence and power the seething indignation felt by many patriotic Americans about the lies the Bush administration told them:

and let me throw this one in as well (works best with the Explorer and its Media Player):

"Your War" is one of the most powerful songs to have come out of the anti-war movement in recent years:


And here is another rock group saying a prayer for the soldiers:

Prayer for the Soldier

Erich Blumrich is an American multimedia artist who has used his talent to comment very forcefully and passionately creating images, sounds, animation using Macromedia's Flash software among other things. Check out his site to see it for yourself:

Not"Woody" the Wood Pecker. Or even the legendary folk singer Guthrie.

We are talking Woody as in the guy from that long running television series, "Cheers" .

We are of course talking about Woody Harrelson.

How many of us knew that apart from being a fine actor, Woody Harrelson has been a dedicated progressive voice, a peace and environmental rights activist and accomplished poet all this time?

Who knew Woody was an activist?

Michael Franti of Spearhead has used his voice, his songwriting ability to talk
progressive and militant politics. He is one of the most prominent artists in the
anti-war movement. In this video, he is talking about another war,going on right now in America:

And finally watch this video recording of a recent ACLU event to get a glimpse about censorship and free speech in the United States of America:

Posted by Kenya Democracy Project at 3:14 AM